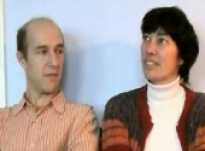 The written information was better in her current pregnancy than her first and the midwife discussed it carefully with her.

The written information was better in her current pregnancy than her first and the midwife discussed it carefully with her.

View topic summary
SHOW TEXT VERSION
EMBED CODE
PRINT TRANSCRIPT
Yes, I mean I think, when I went for the scans this time, when I was pregnant this time, the information that we got sent before the scan actually was very good at telling you that. It said, you know, 'This is a serious, it's a serious medical proce-' - you know, not in those kind of words, but it was a serious medical procedure, that it wasn't there just for, there was a lot of things that could be found out and it wasn't always good news.

And I felt that that was very positive that they dealt with it like that. I thought it was really helpful, really helpful information, very clear and actually my experience of finding I was pregnant that time and, and the first time was poles apart in terms of the kind of level of support and information I got.

So you had a session with the midwife?

So I had a session with the midwife. Now that might been because I'd had the early scan, so I knew at eight weeks that the baby was OK at that stage, but I saw the midwife immediately after I'd had that first, very early scan and she was...

Was that their, that was their invitation?

It was much more what I thought my experience was going to be the first time. So it included information about where you could get the nuchal fold scan in that information.
Previous Page
Next Page