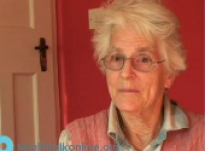 Age at interview: 75
Brief Outline: After experiencing pain for five years Dorothea had her hip replaced earlier this year. The operation was successful and subsequent difficulties she experienced are due to an ongoing spinal condition. Operation in January 2010
Background: Dorothea is a widow and has grown up 3 children. She is a retired primary school teacher. Dorothea's ethnic background is white British.

She went along with the hip replacement that the hospital seemed to assume she would have but...

She went along with the hip replacement that the hospital seemed to assume she would have but...

Is there anything perhaps that you would have liked to have had more say in?

Well, it took me such a long time to get used to the idea that I was actually going to have a hip replacement. I know you have to wait for the operation so I had six months or so to decide against it. But I was, I wasn't pressured into having it, it was just it looked like, ‘Oh, next patient. Yes, x-ray says this, do the injection, do the operation, on the list, next patient. What’s the next patient?’ It looked like a conveyor belt to me, and obviously, with the targets that the NHS have to manage I realised I’m part of the system and I had to take my turn and do what they decided is the right thing.
So I went along with it, but I was, I, I just, I hadn’t got my head round actually accepting it. And, at my pre-assessment, which was very thorough, at the hospital, everybody talked me through it very, very well, the nurse, the occupational therapist, the anaesthetist, and everybody, accept the consultant who said, ‘Sign here, we’re ready to do the operation anytime from now.’ And I suppose I must have had a list of risks, I can't remember having them, and it was seeing the consent form just like that, I, I did, I felt quite that I wasn't a person I was just doing it because I was told to do it. And I knew I was going to have the operation, but it was, it was a bit of a shock the way it was presented, just like that. It’s, it’s coming to terms and I didn’t come to terms with it until I was on the table.
Previous Page
Next Page