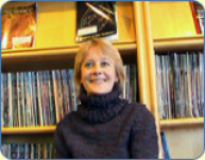 Age at interview: 21
Brief Outline: An ex-partner told her that he found out that an ex-sexual partner of his had been diagnosed with HIV. (Played by an actor)
Background: At the time of the interview she was living in shared accommodation and working and studying at the same time. (Played by an actor)

Explains how she and her ex-boyfriend had to go and be tested for HIV after he found out that an...

Explains how she and her ex-boyfriend had to go and be tested for HIV after he found out that an...

What led you to be scared of Aids, you were presenting some signs or symptoms?

It was, no, no it was a bloke I was going out with at the time, we'd been going out for quite a while and we'd been, well at first we were using condoms and then I went on the pill, we hadn't got tested for things which I know is a bit silly but you kind of, you know just presume.

I don't know, I just kind of, when you've been seeing someone for a while you start presuming, and I don't think that's really the case. And then he found out that a girl he'd slept with, a couple of years before we'd started seeing each other, was HIV positive.  And he didn't know because he'd found out through a friend of hers, she didn't tell him so he didn't know whether she had Aids, I mean she might not have even known whether she had Aids when' or HIV, at the time.

But he knew that she was HIV positive now and so wasn't sure if she might've been then, and they hadn't used any contraception. So he tried not to tell me, he tried to go and get tested without telling me but I thought he was being a bit funny and I ended up getting in a bad mood with him, so he had to tell me.

And then we went and got tested together. I remember it seemed to take quite a while, it took about three or four days because it was the weekend and we couldn't find anywhere to get a test at the weekend. But eventually we did, and it all came back and it was all absolutely fine, we were both fine.

But that was quite scary and it kind of made me realise I've got to be a bit more sensible. I mean like he's twenty eight, he's quite a bit older, so well it's kind of, he obviously has a bit more experience and probably should have, I don't know' been aware of that.
Previous Page
Next Page