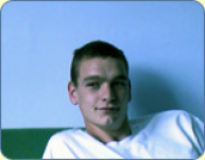 Age at interview: 21
Brief Outline: He has never wear a condom because he does not like them.
Background: He is a young father who lives with his partner and their two small children. At the time of the interview his partner was expecting their third child.

Talks about the activities he does with his children.

Talks about the activities he does with his children.

View topic summary
SHOW TEXT VERSION
PRINT TRANSCRIPT
What activities do you do with them?

Come to Sure Start a lot, they play in the garden a lot. Play in the garden with 'em, play indoors with 'em, and like go over the park, whatever they wanna do themselves most of the time. If they want you to play they'll ask, well the 2 year old will ask.

Explains that his two children and the one his partner is expecting have all been unplanned babies.

Explains that his two children and the one his partner is expecting have all been unplanned babies.

Just before her 17th birthday she had him.

After that how long before you had the second one?

It was a year after when she give birth. I dunno quite a few months, about three months after, she fell pregnant!

And how do you feel about it?

All right.  I thought we'd stop at one but they just keep coming!

You wanted to stop at one?

So what do you think you could do to stop at three?

Use contraception. No, we went there before so she could have them needle things.

Needles that, needles like the Pill 'ent they but you have needles every three months.

We went to find out about them but they said come back because they said 'you ain't got a normal period' because she'd just given birth so we went back the next month and they said 'no, wait for another one' but she didn't have no more, so fell pregnant again!
Previous Page
Next Page