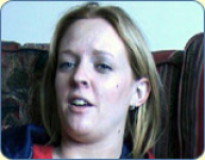 Age at interview: 23
Brief Outline: She has had two incidences of suspected blood clots, but says that oral contraceptives do help her to cope with very hard periods.
Background: She lives with partner and their two daughters age three and two months. Currently she is a full-time mum but plans to continue her studies soon.

Describes why she is happy with her family life.

Show in context
SHOW TEXT VERSION
PRINT TRANSCRIPT
So, regarding family planning are you planning to have more children?

No, that is it. Oh, we both definitely, we both wanted two children and now we've got girls we kind of think that's quite a good time just to stop there. Young enough that we can still do stuff now and I really don't want any more than two children. So, at the moment we're not planning on having any more. But who knows what will happen in the future?

Oh, it's security. There's nothing nicer than coming home to, you know, him coming home from work, I love it. It's the best time of the day when he comes in and obviously  [daughter] is thrilled to see him and he wants to obviously talk to us  and well, he's just my best friend. I've known him for so long that I don't' like worry about telling him, or speaking to him about anything.

We just get on really, really well, we hardly ever argue. You know, just we've got a really good relationship and so it's really nice that I'm really close to his family as well 'cos, since my dad's gone it's only like my mum and my sister which are actually my family around here but they feel like my family as well so i'm, you know, part of a huge family now, which is nice.

I mean, you know, he's a brilliant dad, very loving towards the kids. He'll do anything for them. Well he does, works so many hours that sometimes we never, we don't see him because he's working so many hours. But yes, it's definitely better, you know, there's more good points to it than there are bad, I have to say, in relationships.

But I'm lucky because he's quite a chilled out person, you know, things don't really wind him up and easy going, he's ever so easy to get along with.

Explains that she has had two incidences of suspected blood clots but that oral contraceptives do...

Show in context
SHOW TEXT VERSION
PRINT TRANSCRIPT
I stayed on it until, oh for a long time, for years. Years and years I was, I stayed on it and then, I can't remember when it was, it was when, well not long before my dad left, which would be August four years, so whenever that was, Yeah.

I had my, I was working in a hotel and my leg blew up one day, went bright red, boiling hot to touch and they thought I had deep vein thrombosis so they took me off of the pill straight away then.

And they said, well they never found anything, it just went down and they don't know if I was, I'd pulled, you know, strained something that just flared up or something like that but they never actually, I had all the scans and everything, they never actually found a clot so they took me off of the pill then and they weren't very keen for me to go on it for a while just to make sure that everything had settled.

And then they put me on the it's Trinordiol, it's called, it's all, the three different colours hormonal things on, and then I've been on those ever since apart from my two pregnancies... Yeah. So they took me off of this, off of the micro-something or other and put me on this other combined thing, different colours. I don't know why, they never really explained to me but they said it was a safer, for you.  And '

And how have you been feeling since?

Yeah.  Fine, apart from when I was pregnant with [daughter] I had another suspected blood clot on my lung and, turned very, well they keep saying, well after I had [daughter] I had the injection, contraceptive injection which I quite hated and they gave, every time I'd go and see the doctor I, she always, I have quite regular pill checks now, to check that everything's because obviously I've been, they never found a blood clot on my lung either but they never know because they put me on Heparin.

I went in on a Friday night and they put me on Heparin and they didn't actually scan me for a blood test for the blood clot until the Tuesday, so the Heparin could have dis, might have been a minute one and the Heparin dispersed it, so we'll never know.

So obviously I've got on my records two suspected blood clots now so they're not that thrilled about me being on the pill but there isn't really anything else. If I come off of the pill then I'll start with these horrendous periods again which I really don't want to be doing. And though that what, and I never want that injection again either because it made me so ill.

Indicates that her doctor told her she needed more information if she were to use the pill as a...

Show in context
SHOW TEXT VERSION
PRINT TRANSCRIPT
I was on the pill originally to sort out these irregular periods so I was on that anyway. I wasn't on it for precautions. My GP always used to say to me, ' The minute you start being sexually active, you need to come back to me and I need to explain to you about the pill to work as, as a contraceptive not as a hormone, like balance thing because it's a totally different thing'.

So of course at 15 you just think, 'Yeah, yeah, well I'm taking it how it tells me to take  it in the packet, what do you need to tell me that doesn't already tell me on the leaflet?'  So, I thought, ''Oh well, I'll be fine'.  But then on the actual, when it actually happened I thought, 'Oh maybe I haven't been taking it right and I might not be protected.

I might be taking it differently to, you know, as a hormone tablet to a contraceptive'. So I did make him use a condom that night just, until I was sure that I, you know, it was fine and then I did, I had to go back to the GP anyway for a pill check and obviously she explained to me everything then.
Previous Page
Next Page