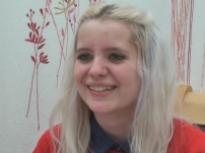 Age at interview: 15
Brief Outline: Delilah took part in the HPV vaccination programme for girls aged 12 to 13 years in school year 8. Delilah said that, during school assembly, a nurse talked about the aims of the vaccination programme. Delilah thinks that more information is needed for girls her age about HPV, cervical cancer and sexual health.
Background: Delilah is a full-time student and is busy working towards her GCSE exams. She lives at home with her parents and siblings. Ethnic background: English.

Delilah took part in the HPV vaccination programme for girls aged 12 to 13 years in school year 8. Invitation to take part and information about the HPV vaccine was provided by a nurse in a school assembly. Delilah said they were given a summary of the programme and its main aim; to reduce the chances of developing cervical cancer. In general, she thinks that more information is needed for girls her age about HPV, cervical cancer and sexual health.

Delilah’s parents read the information leaflet and thought it was a good idea for her to get vaccinated and were impressed that the programme was available at school.  Her parents signed the consent form but didn’t feel the need to discuss it at length or look for more information elsewhere. Delilah’s only concern regarding the HPV vaccination programme was whether the jab was going to hurt!

Over a period of six months, Delilah got three jabs at intervals of two months. Each time before receiving the injection one of the nurses asked her the same three questions: Are you allergic to anything? Are you pregnant? Are you on any medication? After she received the jab, Delilah felt a bit sick and her arm ached for a couple of days.

Delilah thinks that the HPV vaccine is just another type of vaccination to protect the health of young women. She feels that parents who think the HPV vaccine will influence the sexual behaviour of their daughters are wrong. She thinks more information is needed in schools about the benefits and limits of the HPV vaccination.

Delilah says the nurse provided an introduction to the HPV vaccination programme and talked about certain health circumstances that made it unsafe to have the vaccine.

Show in context
SHOW TEXT VERSION
PRINT TRANSCRIPT
And who explained why the vaccine was a good idea?

Well I think there was an assembly on it, I think and then when we went in, when we actually getting the injections the woman [the nurse] or the person who did it was, gave us a bit of information, like just gave us a summary of it. I think she just told us why she was doing it which was just, yeah, to decrease the chance of it [cervical cancer].

Ok so how big was this assembly?

Well I think it was just for our year group just because we were the ones, just for the girls I think. I think when we were queuing up in to the hall they told us a little bit about it just before we went in.

Did you have a chance to ask questions?

Yeah we did. They did ask if we wanted to ask anything but they asked us a lot of questions that they needed to know. So you know: ‘are you on any medication, could you be pregnant’. Things like that like, ‘Are you allergic to any of the needles or anything’.

Do you remember any other questions they asked or any other information?

Not any particular information in itself I just remember them asking the questions of: ‘are you on any medication; could you be pregnant; are you‘. I think it was just, ‘Are you allergic to anything’ and not that you have any like. Yeah I think it was just allergic things just so that they could be completely safe when they were giving it so…

Delilah talks about having the jabs, how she felt afterwards and the advice she got from the nurses.

Show in context
SHOW TEXT VERSION
PRINT TRANSCRIPT
Can you describe what happens during the HPV vaccination? What was involved, how long did it take?

It took about, like the whole process took about 3 minutes, 4 minutes so not long. I don’t think…

Ok what was involved?
Well we went in and they took our name and they ticked us off and everything and registered us. And then we’d go into our separate nurses and they’d ask us all the questions. And then I think they, I think they disinfected, you know, wiped you with disinfectant and then they. Well if you wanted they showed you the clean needle but quite a lot of people didn’t want to look at it but. And then they’d do it and they’d put cotton wool in and then put the tape on and then we could go.

Did they give you any kind of advice?

Well they told us how to look after it. So, you know, if it’s, if you feel like it’s bleeding keep it on but wash it with a disinfectant wipe or just some water and it will ache for a couple of days. They told us what to expect and you know, to keep trying to move our arms. So that was all very helpful. Yeah and then we had a cervical cancer band to take home to show that we’ve had it [ha].

Yeah it ached for a couple of days.

Did you feel unwell in any other way?

Delilah says there was not enough information for her to understand how the HPV vaccine would protect her from cervical cancer.

Show in context
SHOW TEXT VERSION
PRINT TRANSCRIPT
I think they could have given a bit more information like actually told us what the injection would do, like how it would, how the actual substance would completely help it. You know, help our chances for the decrease in cervical cancer and the percentages of it working. I can’t remember them saying anything about, you know, that there’s a 90% that it would, you’ll never get it or kind of thing. I don’t remember them saying anything.

I think yeah. I think more information would have been good just because I remember being quite curious about it, not really knowing about it. I think it would be quite handy to know that information, yeah.

Ok so… do you think it would be a good idea for them to send more information now that you are older?

Yeah definitely because we will have understood it now a lot when we are older because I mean we were only 12 so half of what they were saying we hadn’t really heard of before but.

Do think it would be a good idea to provide you with a kind of… or top up the information they initially gave you with more information now at your age?

Yeah I think that would be a really good idea at this age especially because this is quite well, from the age of 15/16 is when more and more people are getting sexually active. So obviously that’s, I think that’s a prime age for finding out information. And obviously we are all a lot more mature so we will have known a lot more about it anyway so we will have more understanding of it.

And how would you like that sort of information or advice to be provided: as a leaflet, or somebody going to school to talk about things that are relevant including HPV vaccination and cervical screening and

I think both really because it’s quite. It’s helpful when someone comes in to talk to you about it because you can, obviously it’s very personal and it’s, you can talk to them face-to-face for questions but I think it’s also handy to have a leaflet there, you know, if you forget the information or if you want it you can look for it for yourself. I think that would be good.
Previous Page
Next Page