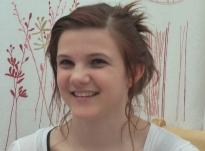 Age at interview: 15
Brief Outline: Amelia took part in the HPV vaccination programme for girls aged 12 to 13 years in school year 8. Amelia feels that, at 12 years old, she was too young to understand all the health risks of the papilloma virus and about the benefits and limits of the HPV vaccine. She thinks it needs to be discussed during Citizenship lessons along with sex education, relationships, pregnancy and sexually transmitted infections (STIs).
Background: Amelia is a full-time GCSE student and is revising for her final year exams. She lives at home with her parents and siblings. Ethnic background: English.

Amelia took part in the HPV vaccination programme for girls aged 12 to 13 years in school year 8. Amelia feels that, as a 12 year old, she was too young to understand all the health risks of the papilloma virus and about the benefits and limits of the HPV vaccine. She thinks it needs to be discussed during Citizenship lessons along with sex education, relationships, pregnancy and sexually transmitted infections (STIs).

Amelia feels that she left the assembly talk about the HPV vaccination programme not really understanding much about what the HPV vaccine was for. She took the information leaflet given by the nurse to her mother, who talked to her about it, explaining that the HPV vaccine offers protection for six years. Her mother thought it was a good idea to get the vaccine but she gave Amelia the choice. Amelia also talked with her school friends about it.

Amelia explains that she didn’t know enough about the vaccine to be concerned. She was worried about having a bad reaction to it like having a high temperature, feeling dizzy or sick. She said the jabs hurt a little but she had none of the bad reactions the nurse talked about. Over a period of six months, Amelia had three injections every two months.

Amelia feels that girls her age are sensible and know that the HPV vaccine doesn’t protect against unwanted pregnancies and STI’s.

Amelia says the vaccination at her school was straightforward but she felt worried about possible side-effects.

Show in context
SHOW TEXT VERSION
PRINT TRANSCRIPT
When the nurses came to your school a second time to do the HPV vaccination, did they explain again or?

No. We just went into the hall in our classes and then we went to each individual sort of section so there were four nurses and obviously they were blocked off so no one could see and they just, they asked you some questions. Things like, ‘Are you pregnant’ or ‘Have you eaten in the last 24 hours’ and things like that and that was kind of it really.

Did you have any concerns, were you worried about having this vaccine or not?

Not really. I guess I didn’t really know so much about it that I had the need to worry I guess. The only thing I worried about was if something, like you said, if I was to like have a reaction afterwards badly, a fever or something like that.

Did they ask about potential side effects or not?

I think they just said, I remember them mentioning that, you know, if you feel like dizzy or quite sick you should like tell someone obviously.

Amelia thinks that Citizenship lessons should have included discussions about HPV and cervical cancer while the vaccination programme was taking place.

Show in context
SHOW TEXT VERSION
PRINT TRANSCRIPT
I think probably an actual lesson on it really in our citizenship lessons at that age when we were having the injections. It would have probably been quite useful because leaflets, not many people read the leaflets or maybe don’t pay attention in assemblies which aren’t particularly long. But if it’s in an actual lesson with like, especially with your friends and things then you can discuss it with your friends and how they feel. And the teacher can tell you about, the information about it and then you’ll know it and you’ll actually be able to like think about it more.

Amelia thinks that parents shouldn’t worry because HPV vaccination happens when girls are very young. She says that girls her age are sensible, cautious and know about safe sex.

Show in context
SHOW TEXT VERSION
PRINT TRANSCRIPT
Some parents think that the HPV vaccine can have an effect on teenage sexual behaviour for example that their daughters might engage in more risky behaviour like having sort of sex without a condom. What are your views on that?

What would you say to those parents that think along those lines?

I would say probably it’s fair enough to be sort of protective and wary I guess but really that, they don’t need to worry because like people especially like of our generation are actually very cautious and you are careful and use protection and are very sensible I guess.
Previous Page
Next Page