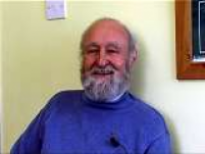 Age at interview: 70
Brief Outline: No urinary symptoms, but because of a family history of prostate cancer asked his GP for a PSA test. The result was slightly above normal. Referred to a specialist when a subsequent test showed a higher result. Prostate cancer diagnosed after a biopsy, treated with radiotherapy.
Background: Occupation' Retired university lecturer. Marital status' divorced. Number of children' 1. Ethnic background' White British.

His brother and father had had prostate cancer so he asked for a PSA test, and he was diagnosed...

His brother and father had had prostate cancer so he asked for a PSA test, and he was diagnosed...

View topic summary
SHOW TEXT VERSION
PRINT TRANSCRIPT
Starting with my brother. He was very ill at the end of 1999 into 2000 and continued for a year up and down, had quite a lot of tests and investigation and one of these was a PSA test. This showed that he had a PSA of 16 but the outcome of the research was that in fact although he had a prostate infection it was quite independent of the cancer. Nonetheless the test score indicated treatment would be a good idea and he went into the hospital in [town] at the beginning of 2001 and had a prostatectomy. This persuaded me that I ought to get a PSA test, particularly as I remember my father had what I think was the same problem in the 1960s. So I came to see the doctor who was initially reluctant to do the test because he considered that it quite often gave false indications, particularly false positives which could be worrying without being helpful.

Nonetheless he agreed to do it because I asked for it and it gave a score just over 4 which was enough to persuade him that he should continue to monitor it and tests were done every 6 months up to August 2002 when the PSA test figure was over 6. And at that point he referred me to a specialist in a hospital in [town] and I had a test, which I've now forgotten the name of, a biopsy, which was really rather uncomfortable. And this indicated that there was cancer present in the prostate and surgery, and radiotherapy were both considered but eventually it transpired that in the biopsy some tissue had been taken from outside the prostate and that also showed signs of cancer which meant that a prostatectomy wouldn't in fact solve the problem and radiotherapy was indicated. So we went into radiotherapy in the summer of 2003, I think a month of daily visits every working day and although it was tiresome it was not in any sense unpleasant and after that I was referred back after three months when we had another PSA and then every six months. And following the last meeting with the specialist, the PSA was still below 1 and in his opinion it wouldn't be necessary to have another review for a year so the next review is at the end of 2005.

When you said he [the GP] was reluctant to give it to you your feelings at that time were, perhaps you can explain why you persisted?

Well because it seemed to me possible that there was a hereditary tendency and that as my brother's health hadn't been affected by the cancer, that his illness was due to a separate prostate infection, it seemed to me not surprising that I didn't have any symptoms and that the sooner the problem was discovered the better, if there was a problem. And of course it would've set my mind at rest if there had been no problem.

His PSA result was just above 4ng/ml, 'at the top of the normal range' so the GP decided to...

His PSA result was just above 4ng/ml, 'at the top of the normal range' so the GP decided to...

View topic summary
SHOW TEXT VERSION
PRINT TRANSCRIPT
So I came to see the doctor. He was rather reluctant to do the test because he said 'You don't get a very helpful indication, I think it tends to make you look iller than you are. But,' he said, 'If you ask for it I shall do it.' And I asked and it came out just above 4 which was enough to persuade him that we ought to continue [to test] every 6 months.

And your first tests were quite within normal range you were told?

They were at the top of normal range, high enough to make the doctor feel that it was worth going on with the series but not enough to persuade him that it was time to see a specialist.

Did you ever actually understand what a PSA stood for, what it meant?

As far as I can recall it means prostate specific antigen and it is something which I presume occurs in the blood as a result of the action of cancer in the prostate.

Did anybody explain to you that other things might make the PSA a little bit above normal?

I'm sure that the doctor did though I can't remember him mentioning anything in particular. But he was very definite that you could get wrong indications which could cause worry without actually being helpful.

But after you had your PSA test and they were within normal range you went away feeling reassured then did you?

Well reasonably reassured but in the sense that the doctor had indicated I should continue it was something that one would have gone on indefinitely I think as long as it remained at that sort of level.

He is convinced that treatment must be beneficial even though his surgeon has told him that this...

He is convinced that treatment must be beneficial even though his surgeon has told him that this...

View topic summary
SHOW TEXT VERSION
PRINT TRANSCRIPT
Yes and looking back do you think you were given about the right amount of information by the GP?

I'm aware of it but I wasn't particularly well informed. For instance, when I had an interview with the surgeon at the hospital it came out that in fact he couldn't prove that any treatment for prostate cancer was any better than having no treatment. He said, 'We've been doing this for thirty or forty years but the patients die of something else before we've got evidence that we've helped them.'

Well it amused me [laughs], I shall die of something.

Did that piece of information make any difference to your decision to have treatment or not?

No, no I still felt that it was worth having treatment. I felt in the end that so many, so many able people wouldn't go on giving a treatment unless they believed it was effective even though their data in terms of life extension was very often disrupted by other influences.

Do you think it would've been useful to have had that information that we're not sure that treatment improves length of life right back at the beginning, before you had the PSA test?

No because I think I should still have wanted to follow the same course and I would think in general that if people had that information early they might very well take the decision not to pursue the issue when I'm inclined to believe they'd do better to get treatment. But then I would, having opted for treatment, wouldn't I?

Essentially I think it's based on my belief that the medical profession very largely knows what it's doing and wouldn't waste its time on a complex treatment unless there was a pretty good chance that it really was helping patients. I did see a television programme about prostate cancer where they had three patients, one of whom had opted not to have treatment, another who'd had a prostatectomy and the third had radiotherapy and each of them was absolutely convinced they had taken the right course.

What does that say to you?

Well I'm afraid it says to me that we tend to cling to our own opinions.

Suggests there is no UK screening programme because of false positive results, because some...

Suggests there is no UK screening programme because of false positive results, because some...

Almost certainly because a lot of the decisions makers agree with my doctor that the false positives are too much of a risk.

Well I think that people, quite a lot of people perhaps might be distressed by the idea that they could have cancer because cancer is alarming. It's a bit insidious and I think we're all a bit aware that at the end of life people very often suffer severe pain towards the end of their life from cancers which are out of control.

Mm so just back on that a little bit, so you think people would worry?

I think it is possible that people who were told they had cancer might fear that it could lead to one of these cancers which spreads around the body. And I think we're all aware of people who get cancer in the lymph glands which seems for some reason to be particularly dodgy area to get it. I wouldn't know why but I suppose it's because whatever the lymph glands produce spreads around the body and would carry cancer with it.

I would think that's very likely to be the case and also cynically because they can save money by not doing it.