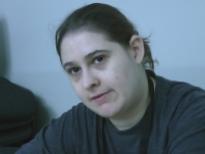 Nicole found pregnancy very painful because she has low curvature in the back of her spine. She also felt very unwell during the pregnancy and was given antibiotics. She decided she wanted a caesarean because of the problem with her spin. She went to a class to learn more about having a caesarean section and was given a DVD and an information pack.

Nicole breastfed her baby early on but was unaware that she would have to be assessed to see if she was capable of looking after her. She thought that social services would support her but she wasn’t allowed to take her baby home from hospital. There was concern that she would harm her baby. She and her partner were sent to an assessment unit in another town after her baby was born but Nicole felt confused and unhappy there and had a psychotic episode.

The court gave parental rights to her partner who now lives with her baby in a different city.

Show in context
SHOW TEXT VERSION
PRINT TRANSCRIPT
I wasn’t treated, I was, you know, I wasn’t treated fairly as, as a normal mother would. Basically I wasn’t allowed to take my child out of the hospital. I wasn’t allowed to take my child home. I wasn’t allowed to be with my child on my own because the nurses and doctors thought that I was at risk of harm to my child. And I found that, you know, other mothers don’t really experience this issues. That they take their children home after a few days and they get to live their normal life with their children. But for me as a first-time parent I didn’t experience this. I think it was quite the opposite as an experience.
Previous Page
Next Page