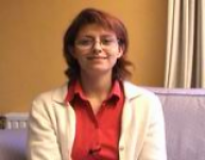 She was very afraid of birth after seeing a TV documentary as a teenager, and did not want her...

Show in context
SHOW TEXT VERSION
PRINT TRANSCRIPT
That's quite an unusual choice these days, to not have your husband there or your partner there?

I don't know. I just felt I didn't want him to see me in, in this state. The birth was a very scary thing for me. I suppose it's all psychologic, well, it is in fact psychologic. I think the first time I've seen a documentary on birth I was too young. I was a young teenager and I was probably too young to see, you know. It was just a mistake, flicking channels, and I saw something I should have not seen at that age and it just scared me. And all these years, the thought of the birth was just something so scary for me. Something you can't think of, it's just too much to take. And so I think I didn't want my husband to see me in that stage. It was a big, big step, the birth. Not too much the pregnancy. Even so the sickness was not nice [laugh]. Pregnancy was not that much of a big step, but the birth was the big, big step, you know, to go through, the big wall to go through for me. And because my expectation was so high, you know, the fear, the expectation of the fear and the, and the pain and, and the blood and all that was so high for me, I suppose that I had a pleasant surprise [laugh] that it was not as bad as I thought it would be.

She planned to go home to France for the birth but went into labour early. The midwives and...

Show in context
SHOW TEXT VERSION
PRINT TRANSCRIPT
Yes, I would like to experience differently, because now I've seen that it's not that bad. And as well the big thing, the big wall, the other wall to go through was giving birth in England. That was something very scary for me because I had heard all these scary stories of some friends who are foreigners and who had bad experiences here, or just the usual, you know, difference of culture. And I went through the birth in England and it was not that bad [laugh]. It could have not been better anywhere else, because the care that I received was wonderful. So it just could have not been better in France, so now I'm not scared of giving birth in England or in France or anywhere, because it was not that horrible experience to go through.

When the contractions, when I was free from contractions I was just happy lying there, and they were having this lovely chit chat with me and trying to make me laugh, And the obstetrician was, he had quite a, a very English humour, I must say, and he told me, 'Oh, you see, well you didn't need to go to France to have a baby. It's happening well in here.' I thought, 'Yes, just shut up - I'm hurting.' I was thinking, 'Why is he trying to laugh with me? I'm not in a state to laugh.' And he said, 'Oh, next time please, do it in France, but take me with you because I would love to go again to Paris.' And I was thinking, 'Oh, is that the time to have humour?' [laugh] But I think actually, you know, that was quite refreshing. And the midwife who was monitoring the heartbeat of the baby, just before he was born she told me, 'Oh, my God.' And she called everybody, 'Look, just his heartbeat is just like really going for it. He's going for it, it's not fading or anything.' Because as I understood, sometimes during the baby, when the baby goes through the, the heartbeat slows down. Well apparently mine didn't. He wanted to go there. He wanted that to happen. So, yeah, there was all the monitoring.

So had you expected or planned to be moving around more, or do you think that's what you would have done?

I wanted to be moving around more. Well, I did, waiting for the contractions to come. Yeah, I did move around. But I would have liked probably to, to have a different position. Next time I will request it, but when it's the first baby I think you just, you don't know what to expect and I was just going with the flow. I was just, they were telling me to do something and I was just doing it because it was simpler. But next time, yes, I will have a different position to give birth.

Staff in the special care baby unit were wonderfully supportive and there was a family atmosphere...

Show in context
SHOW TEXT VERSION
PRINT TRANSCRIPT
Well, as I said I, I went back home twenty-four hours after the birth because I was feeling really well, I was walking about every where. It was heartbreaking to go home without him, and I was feeling a very bad mum for that, but I didn't want to stay more in the hospital. I wanted just to get on with my moving and my parents coming and, so every day I was doing half an hour trip to go and see my baby for, you know, a few hours or morning or an afternoon or more. And over there they were just very welcoming. It was like you had the hospital and as soon as you entered the special baby care unit, it's like a sort of home. It's like, oh, I don't know, well, yeah, a proper nursery thing. It's just really welcoming. They greet you, you get all the, the little things that you do. It's like routine things. You wash your hands. You put your coat there, and you go through there and you see your baby. And when he was better he had his own little room. And when there were seeing us coming with visitors they were coming with chairs, like they did with my parents. I mean, we were all around, you know, standing up, watching the baby, and suddenly very discreetly we looked behind us and there was chairs. And my Dad said, 'Oh, wow. What was that for? Thank you very much.' And it was constantly asking if we needed something. [whispering] 'If you need something, I'm just over there, ok? Don't hesitate to call me.' And that was like, 'Oh, yes, wow.' I mean, OK, it was not crowded and busy, but I suppose it never gets crowded and busy. It's probably always a really relaxing place for the babies, but they were just very helpful, nearly part of the family in some aspects. And sometimes I was feeling, 'Oh, what if my baby likes them more than me because they look after him so much better? I don't know how to look after a baby, they do' [laugh].

But it was just so strange atmosphere. You were feeling like in a cocoon, really protected. And I saw, I mean, all the different shifts because my baby stayed twenty days there, so I saw all different people working there. And some of them when I was arriving they were holding either my baby or another baby, and they were cuddling and kissing the babies and talking, you know, little words like, like a mum does. And I thought, 'Wow. It's not just a job. It's more than a job, it's actually really caring for the babies, whoever they are.' And that was surprising. I never realised that people could be so committed. Well, it's lovely to have a baby, even if the baby's not yours, it's just lovely, but they were just so committed. And they talked me through everything, how to bath him, how to breast-feed, everything. They were just there every step - without me even asking sometimes, they were there. They knew probably, you know, what the next step was going to be, so they were telling me first before I was asking. And the day that we left the hospital was heart-breaking, because I wanted to go every day again to see them. I couldn't [laugh], I had no reasons, but it was like leaving, yeah, a part of the family or friends, and it was nearly tears. And they were like, 'Oh, so our big boy is leaving now.' And one of them actually asked me, she was one of the newest ones. She said, 'Well, I've looked after him for the last two days and a half, can I please go with you to the car park to the car?' I said, 'Of course you can.' So she, she came downstairs with us. She escorted us to the car, just to say, you know, to stay a bit more with my son and to say goodbye. And so yeah, it was like really family. We went a few times after that to say hello. And each time it was the same atmosphere. You know, it's like, outside world, and you go through these doors and it's like oh, a different world completely.