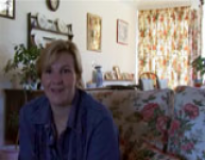 Explain that they chose to proceed with the pregnancy and opt for surgery because they would not...

Explain that they chose to proceed with the pregnancy and opt for surgery because they would not...

View topic summary
HIDE TEXT
PRINT TRANSCRIPT
OK well I found out that I was pregnant in August 2001 and I had my scan, my first scan at 5 months pregnant and they detected twins. Three weeks later I went back for a more detailed scan and they did a scan of the heart and that's when they picked up that one of the twins had a heart defect. So they got me to, an appointment to a hospital nearby and I had to go there the next day and I was basically given three options. They wanted me to have an amniocentesis but obviously with it being twins there's 50% chance of risk and I didn't want to take that chance so we said 'No' to an amniocentesis and we were sent home for the weekend with options. One was to abort, one was to carry on and let the baby, let the poorly twin die and have no surgery or the third option was to go through with it all and have surgery and that's what we decided to do.

How did you make those decisions? They're very hard decisions to make.

They were, yes but I wouldn't have aborted anyway. It was, I would have, I wanted to give, give it the best chance I had. I would rather have gone through the pregnancy and had surgery. That's just the way I am and my husband, we both agreed on that.

She found it upsetting returning to the maternity ward with only one of her twins while the other...

She found it upsetting returning to the maternity ward with only one of her twins while the other...

View topic summary
SHOW TEXT VERSION
PRINT TRANSCRIPT
We still didn't know what was going to happen because the hospital that I gave birth at wasn't the actual hospital where the baby would have its surgery. It was just a hospital that I had to deliver at because there was a heart specialist there but they couldn't actually do the operation. So we had to, it was very hard because I had to go back down on to the ward and of course everybody knew I had twins and going back to one, just taking the one baby with me was very hard and emotional.  And people wanting to know where the other one was, and that was, that was very hard. And two days later they transferred the poorly baby to another hospital where he was going to have his surgery. And we followed down the following day to be there.

She felt like she was going through a bereavement and was cut off from the contact with midwives...

She felt like she was going through a bereavement and was cut off from the contact with midwives...

View topic summary
SHOW TEXT VERSION
PRINT TRANSCRIPT
I still had another 4 months and you were constantly worrying about is the other twin OK and what, what was going to happen at the end of it because we didn't know what symptoms it was. All we knew it was a heart defect. We didn't know exactly what the defect was or if  there were going to be, have a disability or, so we still didn't know that at the end of it. So it was very hard. It wasn't a happy pregnancy. No, no.

How did you feel through the rest of your pregnancy?

Very low. Still wondering what, what was going to happen at the end of it. I know I wanted to give, give it everything that I had but it was still very worrying. It's still going for the surgery after, I still didn't know if it would make it or what was going to happen. It was very unknown. And there wasn't really anyone to talk to. So, it was like basically left, left on your own to get on with it. It was very hard on all the family.

Could you say a bit more about there wasn't anybody to talk to?

Yeah, well the midwives, once, once the midwives knew they didn't, I didn't really see a midwife because they thought there'd be enough doctors and things involved and I had to keep travelling to a special hospital to have my scans. I had, I got scanned every other week and there was a lot going on but there wasn't really anyone to talk to.

When I first found out I, I felt as though I was going through a bereavement. That's, that's the only way I can describe it. It was, it was just awful. And no-one to talk to about it.

Explains that feeding by NG tube was a tiring and time consuming process.

Explains that feeding by NG tube was a tiring and time consuming process.

View topic summary
SHOW TEXT VERSION
PRINT TRANSCRIPT
Well no, I mean that's been very hard because sometimes the feeds would take over an hour to go down his tube.  So you'd be standing with your arm up for an hour or so feeding him because obviously it's all gravity fed so the higher you hold the tube up the better. That was very time consuming.

So does it, does it have a stand?

No.  We just used to have to hold it yourself, yeah.

So you really are restricted in what else you can do?

And how often was he getting fed?

And it was taking an hour at a time?  And you had the other twin as well.  You must have spent most of your days just feeding?

Yes, the hospital were very good, yes. And before you give him a feed you have to check the stomach contents. You have to draw out with a syringe and test it on litmus paper to make sure that his tube is still in his stomach because if he moves around it could go higher up or lower down. And a couple of times we weren't getting anything. The paper wasn't going pink, it was supposed to turn pink. And it wasn't going pink so we'd have to take him up to the hospital and they would just move the tube around a bit until they got it pink. Every time it was learning, yes. And sometimes he would pull the tube out himself, so we'd have to go up again and they'd put the tube in for us.

To the local hospital?

Describes fear that siblings would feel neglected when their parents were spending time at the...

Describes fear that siblings would feel neglected when their parents were spending time at the...

View topic summary
SHOW TEXT VERSION
PRINT TRANSCRIPT
They knew that he was going for his second operation. We had to go a couple of weeks before for him to have a catheterisation so they could actually look at the heart and make sure everything was OK before his second stage and we did take one of the children with us. Our oldest wanted to come down and he actually came. I think that's made it, that's helped because he, he knew that mummy and daddy weren't down there having fun, you know, it was a hospital and he wasn't missing out on anything and my other child she's quite happy to stay and be with Nanny, so. She didn't like looking at the photos of, of our son with the tubes in, she didn't, she didn't like that. Whereas our older child was 'What's that for?' You know, 'Why has he got this?' and 'What does that do?' and you know he was more questions. Yeah.

So they have reacted in quite different ways?

Yes, yes, yeah.  They love him to bits though now.

Do you think it's had any affect on them, you know, this attention being focused on him?

I think it did at first, it was hard at first 'cos obviously I'd been away from the home a long time and my husband was, and when I was in hospital still expecting, 'cos I was there for 4 weeks, my husband was coming every day to come and visit and obviously they found that hard 'cos it was just my mum here. I did, I do feel that they felt a bit left out. But we made up for it when we got back, yeah. We let them know we weren't on holiday having a nice time.

And do you think that's what they thought?

I think so, yeah, yeah. They didn't really know where we were, you know, what we were doing. Yeah. 'Cos, luckily we've never had to go to hospitals as such before. They've never really seen hospitals or had to go to them.

Provision in the parent accommodation was not available for the first two nights when her newborn...

Provision in the parent accommodation was not available for the first two nights when her newborn...

View topic summary
HIDE TEXT
PRINT TRANSCRIPT
But when we got transferred from the hospital that the twins were born at to the hospital where he had his surgery, we got told at the hospital that yes there was a room and everything for us when we got there but when we got there, obviously when we got to the ward the nurses weren't interested in whether we had, we weren't top concern. Their top concern was not for us to have a room, it was obviously for the care of our baby and obviously I found it very hard because I'd only just given birth two days before and I was still big, ankles swollen, bad back and because it was Easter weekend people had gone home early so we couldn't stay at the room that we were supposed to stay at so we actually spent the first night on the children's ward in a children's bed which was not nice. Especially with a newborn baby as well. And then the second night, that was the night before the baby was going to have his surgery, we were on Intensive Care because he was there the day before getting ready for surgery and actually one of the nurses on the Intensive Care Unit said that she will sort our room out for us that night and we did actually get a room with a bed and we stayed actually on top of the Intensive Care Unit in one of the parents' accommodation. And then the following day we stayed, where we were supposed to have actually.
Previous Page
Next Page