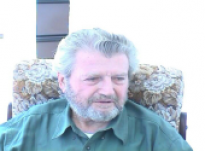 Diagnosed with cancer of the pancreas in 2001, followed by a laparotomy, a gastrojejunostomy and then chemotherapy. After having had some chemotherapy he decided to try an alternative therapy, apricot seeds.

He is a retired rigger; he is married with three children.

He was diagnosed with pancreatic cancer in 2001. He had indigestion and jaundice so went to his GP.  He had also had bad breath and tiredness and later wondered if these had been symptoms of pancreatic cancer too.
The GP sent him to hospital where he spent two weeks having investigations, including seven scans. Major surgery was planned to try to remove the tumour but he was told there was only a 40% chance of him surviving the operation. When they opened him up they found that the tumour was too advanced for removal so instead they did a gastrojejunostomy. This is a surgical procedure where the stomach is surgically connected to the small intestine.
He had chemotherapy for seven weeks. The treatment was considered a partial success as a scan showed that the tumour had not shrunk nor grown. Doctors said he should continue the treatment but he decided not to. He said he found the treatment dehumanising. His veins had collapsed and he no longer wanted to put up with the side effects. He just felt it wasn’t worth it; he didn’t want to feel like a burden and would rather let nature take its course.
His wife, who had previously lost her brother to pancreatic cancer, looked online for information. She saw apricot kernels promoted as a cancer treatment and suggested he try it. They ordered some from the USA and he began eating them, combined with a strict diet that included lots of fruit. He later replaced the apricot kernels with tablets called Amygdalin which are a manmade version of the apricot kernels. There is no evidence they work as a cancer treatment and people have died from cyanide poisoning when taking it.
He said 'no' to having more chemotherapy.  The doctors said there was nothing more they could do for him and gave him about six months to live. He decided to use his remaining time to sort out things so life was comfortable and his wife wouldn't have problems to sort out after his death.
He replaced one of his off-road vehicles with a saloon car so he could visit family and places of interest. He sold his collection of rare books and his guns. He dealt with a problem between him and his son. He started doing the house up so they could move to a smaller house that would be easier to manage. He has been making slow progress because his energy levels are low.
He has lived a lot longer than anyone expected, his condition seems stable. He no longer has scans and he has even reduced the amount of pain relief he uses. He thinks the apricot kernels have helped him but he cannot be sure. Again, there is no scientific evidence to support this.
He was seeing the oncologist (cancer doctor) and the surgeon every three months. He can have more chemotherapy if he wants. The oncologist has changed the consultations to every six months. He takes  tablets to help him digest food (pancreatic enzyme replacement). He also sees his GP regularly, who has said he might be depressed, so gave him antidepressants. They help him to sleep but make him dopey in the daytime.
He gains comfort from religion and accepts that he may die from his cancer. He feels that at his age he cannot expect to live a lot longer.
We spoke to him in 2003

Surgeons performed a gastrojejunostomy to overcome the obstruction caused by the tumour and to...

Surgeons performed a gastrojejunostomy to overcome the obstruction caused by the tumour and to...

It was cancer round the pancreas and the tubes were, when my food goes through that way, I’ve not got a very clear, I asked for a technical definition I did get one, verbally but I didn’t get it in writing so I can’t explain exactly what it is but, I was getting chronic indigestion and turned yellow, jaundice and went to the hospital and I was two weeks in there and I had several different scans, they couldn’t make up their minds even then what it was. I don’t know really why so I came home for Christmas from the hospital, went back in two week’s time and they opened me up then to have a look and you know found that it was too far gone to do any, to undergo surgery and so they made up two tubes from bits and pieces of my intestine some where, that part of my flesh. They made two by-pass tubes round the bit that was being strangled so that I could still eat and drink and it was a bit of a relearning process because I’ve lost all of my refinements, all of the digestive refinements you know you don’t realise what a wonderful mechanism you’ve, it’s, got in there until you lose a bit of it, [laugh].

When he was told he had six months to live he sorted his things, sold some of them, improved his...

When he was told he had six months to live he sorted his things, sold some of them, improved his...

View topic summary
HIDE TEXT
PRINT TRANSCRIPT
And so we did that and then I had to say, over the years I collected books on my particular subject which was sailing ship rigging, old sailing ships and some of them were quite, you know quite expensive and the sort of horror you have is that if you die and nobody knows then somebody could have picked those up in a boot sale or some dealer’s going to come on a house clearance and whip the lot away and give [my wife] about £50.00 for them you know, so I took a bag full of those up to Bath and sold them, they didn’t give me much for them as it happens but I said I’d rather that I know that they were going to back to people who needed them, because they were quite rare books some of them. I’d rather know that they were going to be re-circulated to people who were interested rather than wind up on a barrow somewhere you know.
And the next thing was I thought well I’ll never be able to fire a twelve-bore shotgun again because if I shake any of my surgery loose I’ll get into trouble [laugh] so I sold my twelve-bore guns, now I want one again, I don’t want the twelve-bore I’ll get a smaller one but I could use it, I can drive my jeep now occasionally but at the time I couldn’t envisage being able to drive it, even just climbing up into the seat was hard work and the clutch peddle is very heavy, so yes, we did that but apart from going just to see my brother once, we haven’t done anything else, I’ve been too busy working round here.
So when you were told it was six months you thought I’ve got to make all these decisions?
Yes, I just wanted to tidy things up, yes, as I say the last thing really, I got some of [my wife’s] brother’s tools, when he died with the same thing, I inherited them and that was my thought again that you don’t, if you don't see that somebody gets them whose going to use them or make use of them or appreciates them then they’re going to wind up with the house clearance bloke or on a car boot sale.
What other decisions did you think you needed to take, did you think for example about a Will?
Well we’ve got a Will, pretty straight forward really, I leave it to my wife and then to my children after but, no I didn’t really, it had been done a long time ago so no I wasn’t worried about that, I got on a better footing with my son, we had been at loggerheads a bit lately and not speaking a lot of the time so that improved, otherwise I don’t really, apart from as I say trying to get everything squared off, you know, while I could, that was really my main motive you know.
You got everything tidied up then?
Yes, I’m nearly done, but I mean there’s a lot to do, I mean the day, the day I was sent to hospital in the morning, that hoard of timber came for that decking out and it stayed under the tarpaulin there for nearly six months till you know last summer and then I got a carpenter with me for a week and we put it up, well I was determined to do it and I thought actually that would probably be the last, you know that would be my project, once that was done I’d probably fall off the perch but I didn’t so the next thing I, well not the next thing but I did several things I’ve never done before, repaired windows and door frames, renewed them and stuff like that, I’m not a carpenter you know but I’ve done a lot of that sort of work round here.

He wanted no more chemotherapy to treat his pancreatic cancer and explained why he took dried...

He wanted no more chemotherapy to treat his pancreatic cancer and explained why he took dried...

View topic summary
SHOW TEXT VERSION
EMBED CODE
PRINT TRANSCRIPT
Can you tell me a bit more about why you’re so convinced these [apricot seeds] are doing the job for you as it were? Some people might say well it, it might have happened anyway.
Oh sure yes, well because after the seventh chemotherapy I went to see the specialist, the cancer specialist and she said, well, they scanned me then, and they said, “Well your tumour’s no smaller and it’s no bigger so it looks as though we can control it and I suggest you have another course” and I said you know, that’s when I made up my mind I didn’t want another course. I didn’t want to do it so she said, “Well you know come and see me again in three months” and every time I’ve been since she just says, “Well let well alone” and now she doesn’t want to see me for six months this time and my doctor was pretty much the same I mean she said, “You know those things you’re taking are poisonous don’t you” so I said “I know they are but so is chemotherapy” and she said, “Well you must be doing something right because you’re still here”.
The origin of the theory is that there is a tribe in the upper west Pakistan near the Himalayas called the Hunsa people, a small tribe of people and their, one of their main diets is apricots because they grow them there and they’ve always eaten the seeds as well and they’ve, there’s no cancer there, they’ve never had cancer and they live to considerable ages in spite of the fact that they live in a very harsh climate, and that’s where the idea comes from and the chemical side of it, again I don’t know, I’d have to refer to a book to tell you in detail, is that half of the, or part of the ingredient in the tablet, in the seed, apricot seed, is cyanide, it’s that and something else but the cyanide only splits if it meets cancer cells, if it meets a cancer cell it attacks it in your system in your blood stream, that’s the theory, very, very basically.
Previous Page
Next Page