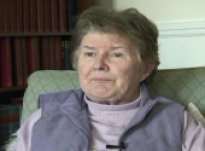 Age at interview: 73
Age at diagnosis: 59
Brief Outline: Elaine was diagnosed with pancreatic cancer in 1995. The surgeon removed most of her pancreas and her spleen. Elaine also had some radiotherapy. Since then she has been very well indeed and only takes Metformin for mild diabetes.
Background: Elaine was a doctor before she retired. She is married and has 4 children. Ethnic background/nationality: White Welsh.

In 1995, when Elaine was aged 59, she noticed that on three occasions she had more wind than usual and was burping. She also noticed that when this happened she felt nauseous, and she passed an abnormal putty coloured stool. This happened over a period of about five months.
After Christmas 1995 Elaine went to see her GP, who referred her to a gastroenterologist, who sent her for an ultrasound scan. The scan looked abnormal so Elaine then had a CT scan, which was inconclusive because of technical failure, and an MRI scan. The scans revealed a tumour in the middle of the pancreas, slightly more towards the tail. A week later, on January 19th 1996 Elaine had an operation to remove most of her pancreas and her spleen. She recovered quickly and although she was tired at first she did not feel much pain. She took antibiotics for a while after the surgery because she no longer had a spleen.
Then Elaine had some radiotherapy to discourage any recurrence. She thinks this went on for about three months. She felt a bit nauseated at times but did not want to take any medicines to relieve this side effect.
After the operation the surgeon told Elaine that she probably had about two years to live. She decided that she did not want to be followed up regularly because at that time the radiologist told her that if there was a recurrence there was nothing doctors could do anyway. Elaine had decided that she did not want chemotherapy because results of chemotherapy were not good and she valued quality of life. She decided to live each day to the full as if it were her last day, and even today she believes that that is important.
Now Elaine leads a full and busy life. She does not have any symptoms and feels well. In relation to the pancreatic cancer she only takes Metformin, which is a drug for Type 2 diabetes. This may be because the remaining part of her pancreas does not produce enough insulin. Elaine appreciates life and says that in some ways having cancer has had a positive effect on her life. It has made her appreciate every day.
Elaine was interviewed for Healthtalk in 2010

Elaine did not have jaundice but she noticed that she had putty-coloured faeces. She was burping...

Elaine did not have jaundice but she noticed that she had putty-coloured faeces. She was burping...

I noticed something odd happening about five months before I actually went to the GP. And it happened about three times that I had, I was getting an increasing amount of sort of wind almost and burping a lot. That was the other thing that was very odd. And my husband said, “That’s very odd.” And then I’d notice a few days later, sometimes I, each, each time I felt a little bit nauseous for a couple of days and then I’d pass a very abnormal coloured stool, as if I’d got a gallstone or something, if anybody else recognises those symptoms. I wasn’t jaundiced, but I just had this very funny stool, which was almost putty coloured. And I thought, “Well, that is very odd.” Then months, and I hadn’t noticed at that time that actually I had been feeling a little bit nauseous before. But the next time it happened when I was a bit nauseous and I think, “Well, I wonder if the same thing will happen again?” And it did. But that was very near Christmas and I thought, “Well, in my experience I know it’s no good going to one’s GP round about Christmas. I’ll go straight after Christmas and then things will be looked into properly.”

Elaine thought that the situation was harder for her husband than it was for her because other...

Elaine thought that the situation was harder for her husband than it was for her because other...

I found that with me and people who knew me, it was fine. You’d just talk about it naturally and fairly matter of factly. And it wasn’t a sort of big roller coaster for me. But I think for my husband, he found it very difficult because so many people avoided talking about it at all, would even scuttle away down corridors, or cross roads. And he found that very upsetting. In fact I think the whole business really was harder for the onlookers like husbands and children, husband and children than, than for me. Because I felt I had the job to do to get better. And I have to say that at no stage actually, apart from the little bit of nausea and getting over a big operation, did I feel ill. And the other thing that people used to say to me, “I’m sorry; I hear you’ve been ill.” And I’d sort of say rather, “Yes, you know, I haven’t been ill. I’ve just had a big operation and I’m over it. And, you know, we’ll see what, see what happens.” But I didn’t feel ill, as I think a lot of people do. I wasn’t in pain.

After her surgery Elaine had radiotherapy. She felt a bit nauseated and tired but had no other...

After her surgery Elaine had radiotherapy. She felt a bit nauseated and tired but had no other...

View topic summary
HIDE TEXT
PRINT TRANSCRIPT
Do you mind just saying a little bit more about your experience of radiotherapy?
I don’t mind at all. You know, it, it’s not really, as long as they’ve done the mapping properly and everything else. I had it done from there, there, I’ve got three, three little …
Stencils?
Stencils. And I had to go and, you know, usually the appointments were not too long. This is all N-, NHS, needless to say. I mean from the start to the finish it was all NHS, and they, and then they’re very good with, with serious things, I think. And you just lie on the table and these great big things come and it goes that way first or that way first through the splenetic area, then straight down and this way. And it didn’t actually bother me very much. But the radiotherapist was passing by one day and he said, quite late on in the treatment, and he said, “Oh, you know, you seem to be standing up to the treatment quite well. You’re not exactly fading away, Elaine.” And I said, “No, I don’t do fade away.” [laugh]. And so even though I was nauseated, it didn’t seem to affect me very much. Because apparently it, going through the liver in particular is, it can be quite unpleasant for some people. But I just sort of thought, “Well, it’s part of the fight” and…
And you had that every day?
Do you know, again one forgets. …I did get more tired. And I’d find, it was in the summer and I was sitting on the, on the veranda and I’d find myself fast asleep.

Cancer made Elaine appreciate her life. Although she wanted to lead a normal life she decided...

Cancer made Elaine appreciate her life. Although she wanted to lead a normal life she decided...

And everybody had advice, but I thought, “No, I’m just going to lead a normal life.” Not pretend it hasn’t happened, because it has happened. But it’s, it’s actually a very, if you have a shot across the bows, I just decided to live, as probably all of us should lead, life as if, you know, each day might be one’s last and make the best of what one, one had, is how I saw it. And I still, and I still carry that with me now. But I don’t think it was here before this event. I thought it actually brought things much more sharply into focus about what was important and what was, some things you could do nothing about and other things were less important. But that’s just me.

After Elaines treatment finished 15 years ago she decided not to go back for regular follow-up...

After Elaines treatment finished 15 years ago she decided not to go back for regular follow-up...

View topic summary
SHOW TEXT VERSION
PRINT TRANSCRIPT
And then the, oh, yes, the other thing I remember at the end of the radiotherapy, which in another sort of way helped me too, I spoke to the radiotherapist and he said, you know, “Would you like to be followed up every year?” And I said, “Well, what, what would happen if you found something?” And he said, “Well, nothing. There would be nothing we could do. But...”. So, I said, “Well, in that case I won’t waste your time, and I’ll forget about it.” Which was a good thing, because actually over the, certainly the first few years I often had a return of, I don’t know, the burping or, or something. I certainly had periods when I had floating stools. And I thought, “If I’d been told to come back immediately I was worried about something, I’d have been back and forward like a, a yo-yo probably.” But as I’d been told there was nothing they could do, I thought, I just put it to the back of my mind, got on, and it always went away. And for, for me it’s obviously worked. I’m not advocating that for anybody else if they’re told there might be something to do. But because I was told there was nothing that could be done after the radiotherapy, and it was likely to be a, a local thing, in the pancreatic bed, I just forgot about it then and thought, “Right, don’t even think about it. Just go on.”
That’s very interesting. It’s useful to know that.
Well, it, it was the r-, response I had to it because I think there’s nothing worse than thinking, “Is it a recurrence?” Or if I had a pain in my back, “Is it a recurrence?” And I thought, “Well, even if it is...”
Previous Page
Next Page