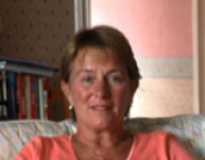 Did not attribute her symptoms to anything serious or gynaecological.

Did not attribute her symptoms to anything serious or gynaecological.

View topic summary
SHOW TEXT VERSION
PRINT TRANSCRIPT
And I do feel, I mean the thing that worries me I suppose most about all of this is the fact that, you know, the business about not, the not even thinking about ovarian cancer. When I went to the doctor's, I can't understand why, but they say, I mean having read about it, I can understand now because having read about it, they say that it's, 'the silent killer' and they, and the symptoms mimic so many other things and all, you don't have hardly any symptoms at all and then it's too late, like it was with me, and whatever.

Because I mean, I really didn't have anything that you could, you know, call a symptom that you would be really worried about. I mean I did just have sort of the ordinary things that you expect to have at my age, you know, nothing to worry about, at all. And I do worry, and I worry about, obviously, I think about other people that, you know, you must go through, or will have to go through what I've gone through before, and there ought to be a way to find out before'

Thought her diagnosis was serious because so many health professionals came to her bedside after...

Thought her diagnosis was serious because so many health professionals came to her bedside after...

View topic summary
SHOW TEXT VERSION
PRINT TRANSCRIPT
I was, I hadn't really considered that I'd have anything else wrong with me apart from the fibroids because of the, he'd said to me that there wasn't any evidence of anything else. He hadn't sort of even suggested there might be. And so the, the morning after I had my hysterectomy I was horrified to have these 6 people come into my room and stand at the end of the bed and actually tell me that I'd got stage 3 ovarian cancer.

There was a, a doctor and, you know, a couple of nurses and, and somebody who'd helped with the operation, and various sort of others, 6 of them altogether. So I mean, I knew when they all trooped in that there was something wrong because you don't get 6 people visit you the day after your operation.

Was given the choice of whether or not to have chemotherapy as well as surgery.

Was given the choice of whether or not to have chemotherapy as well as surgery.

View topic summary
SHOW TEXT VERSION
PRINT TRANSCRIPT
She [the oncologist] told me that it would be only a few months if I didn't have any chemotherapy, I would only have a few months and, that the chemotherapy that she was offering was a gold, what she said, her words were 'Gold star treatment' and that it was very well worth having. Because I'd explained to others I didn't want to have, just have chemotherapy and not have any quality of life, having just watched my friend die of cancer, so, you know, I was very, that had only happened 6 weeks ago, so 6 weeks before I'd seen the gy, I'd seen the oncologist.

So I did explain that to her but she said it was, you know, I would only have months if I didn't have it and it was a very very good treatment and it, and there was even at my stage, stage 3, there was a very good chance that it would, you know, it could get rid of the cancer altogether and, you know, there's, there's a very good, you know, there's a very good chance still.  She had, she said she had actually discharged people that at my stage but she said everybody is different and, you know, but it is well worth having, having the chemo. It's also a very kind chemo, the chemo, the carboplatin she said was very kind, you don't lose you hair with it and, it's, you know, it's not one of those that makes you feel dreadfully ill, although it's not pleasant'. So I said, well I'd go away and think about it, and I went away and thought about it for a few days and then I went, I phoned up and said, 'I'll have it', and I started virtually the next Monday.

Took HRT for menopausal symptoms before her diagnosis but was taken off it and her symptoms...

Took HRT for menopausal symptoms before her diagnosis but was taken off it and her symptoms...

View topic summary
SHOW TEXT VERSION
PRINT TRANSCRIPT
Before I was ill I was going through the menopause and I was taking HRT. So I was, I didn't have hot flushes and, I do now have hot flushes and whatever, which I didn't have before, because I obviously started taking the HRT for those sort of reasons. But, so I am having that now but apart from that nothing else worrying at all.

Did they take you off the HRT?

Yes, straight away. Well even when I went to the doctors, she, when, that second time for the, she said I must stop taking them straight away. And the oncologist said that she doesn't recommend HRT. She said, you know, for people that have had ovarian cancer. So I'm not planning on taking, I'm just taking the oil of evening primrose now, I'm not planning on taking anything else.

Is it difficult to cope with those hot flushes?

No, not really, no. I mean when, I think that when you've coped with being told you've got cancer I don't think anything else actually, you know, it doesn't feel, nothing feels quite so bad. I think before, probably if I'd had hot flushes, I would probably have gone to the doctors and said I've got to have something. But now nothing seems quite so bad I suppose really because, you know, it's such a sort of shocking thing to have happen to you really.

Couldn't visualise any future while feeling so ill from her chemotherapy.

Couldn't visualise any future while feeling so ill from her chemotherapy.

Was relieved when the news that she had cancer had reached everyone.

Was relieved when the news that she had cancer had reached everyone.

View topic summary
SHOW TEXT VERSION
PRINT TRANSCRIPT
So how did you go about telling your family and friends?

Well I can't remember really. I suppose they just came to the hospital and told people one by one as, as was appropriate I suppose really. My youngest son I didn't tell him for a few days because, I can't remember what he was doing, but it was, and I think, I think my friend phoned round a lot of people though. I've got a friend who supported me a lot and I know he phoned round quite a lot of people. And so I think most, you know, a lot of it was by phone really, because a lot, most of my relations and that aren't here.

Was it difficult telling them?

I found it ever so difficult whenever I told anybody. And like, you know, even when I, like my neighbour came across one day when I came out of hospital, you know, and I had to say to her and I found it ever so difficult, every time I had to tell anybody. And I was actually really quite pleased when everybody knew, because it, because I then, I didn't have to go over it every single time, you know, it, it was such a relief after about 3 weeks when everybody knew I'd got cancer and then that was it. And then it, that was a, you know, that was a great relief 'cause I could just sort of be more normal, but then everybody treated me so differently that that was quite difficult.

Her three children reacted to the diagnosis in very different ways.

Her three children reacted to the diagnosis in very different ways.

The, my eldest son, is, he's a very, he's a policeman, he's a very sort of pedantic sort of chap, and, he took it very well. I mean he did a lot of talking to me and asking me, you know, was I alright and what did I need to, what did I want to do with the rest of my life, and, you know, was I going to be alright, that kind of thing, in the, in the beginning. And now he just, you know, he just keeps in touch and rings up and makes sure I'm alright each month and whatever.

But my daughter, she's the youngest of the 3, my second son, he's, he just sort of treats me just exactly the same, which is quite nice really because it's a bit peculiar sometimes always being treated differently, and I have had to say to people, you know, 'look I'm not dying yet, you know, I might be one day, but, you know, I want just to be normal, I don't want to be treated any different'. So he treats me very different.

My daughter I think is quite badly affected, I think, she's very conscious of, I suppose herself and of being a woman that, I don't know, maybe that's what it is. She seems to be, well she worries more then, put it like that, I mean she seems to worry more about me and I know, I know it does bother her, I can tell from how she is that it bothers her and, you know, and that she doesn't cope with it as well. But then her life is not wonderful. So, you know, maybe some of that is because she's not as settled as she might be, so, but they, I mean they, you know, they're all, you know, there and very supportive and so I think I'm very lucky really.