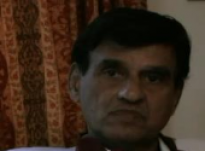 Age at interview: 65
Brief Outline: Malcolm had two kidney transplants, in 1981 and 1988. The first donor was his mother; the second was a deceased donor. He had dialysis for four months. He has been well for over twenty years.
Background: Malcolm is a retired university lecturer and married. Ethnic background / nationality' British South Asian.

Malcolm was born in Bombay and, in 1962, left to join the merchant navy, where he worked for about six years. There, he found out that he had high blood pressure and a problem with his breathing. He was in Singapore at the time and, when his ankles also started swelling, he went to see the doctor. He was 25. Later, when he was in North Korea, Malcolm went to see another doctor, who prescribed medication and his blood pressure came down. Later, in China, he was diagnosed with nephritis, which is an inflammation of one or both of the kidneys. He tried various medications for a few years.

Malcolm moved to England in 1974, where he was prescribed other medication for a further six years. In 1980, the possibility of having a transplant was suggested and, in 1981, Malcolm’s mother, who was 61 at the time, travelled from India to the UK to donate one her kidneys to him.

Both Malcolm and his mother recovered well but, a few years later, tests showed that his creatinine levels had started to rise again. The kidney was slowly beginning to reject. He was given various medications but none of them stopped the rejection.

In 1987, Malcolm had kidney failure. At the end of this year, he also had triple heart bypass surgery. He then went on to have peritoneal dialysis. This involves using the patient’s peritoneum in the stomach as a membrane across which fluids and dissolved substances are exchanged from the blood. Fluid is introduced through a permanent tube in the stomach and flushed out either every night while the patient sleeps or via regular exchanges throughout the day. Its main advantage is that the patient can have treatment without visiting the hospital.

Malcolm had peritoneal dialysis for four months. During this time, he was still very active and continued cycling twenty miles a day to work.

In 1988, when Malcolm had attended hospital for a check-up, he was, unexpectedly, offered a second transplant. This time, the donor was a deceased (cadaveric) donor. At first, Malcolm was unsure about having it. He had felt depressed after the first kidney had rejected and was wary of this happening again. However, his wife persuaded him to go ahead with the surgery.

Over 22 years later, Malcolm is still fit and well. Around 1998, he was diagnosed with diabetes. He is careful with his diet but leads a full and active life.

Malcolm is very grateful to both his donors. He is keen on raising awareness of organ donation and in favour of presumed consent (opt-out).

Malcolm was able to carry on with life as normal. He felt depressed after his first kidney...

Malcolm was able to carry on with life as normal. He felt depressed after his first kidney...

I was very active, so the doctors wouldn’t have thought there was anything wrong with me.

Yes. And after the transplant, was there a difference because ,

Not really, I don’t think so. Well certainly before the first kidney I was doing everything. I was really quite fit. And then towards the end, say before the second kidney, I had to go on dialysis. And the dialysis made you feel pretty rotten because it was peritoneal dialysis. And I actually had to go into the hospital at the weekends and stay there for three days whilst they dialysed me through the abdomen, via the peritoneum, and it depressed you certainly.

Physically, I don’t think I was any worse, but I was really quite depressed with the fact that my mother’s kidney had completely failed. And I had to contemplate a life on dialysis. So I think it was more a mental thing, it wasn’t really a physical thing.

A few years after his transplant, the kidney started to reject. Malcolm had heart surgery and...

A few years after his transplant, the kidney started to reject. Malcolm had heart surgery and...

They did the transplant and they said it worked fine. It began to work as soon as it was put into my body, right on the operating table. And they said it was an excellent match and everything.

However, after a few years, the blood results were not so good. The creatinine started to go up. And they said it looks like you’re having some sort of a long term slow rejection. So they gave me various treatments and different types of drugs, methyl prednisolone, drips and things, which were really quite powerful drugs, but none of them stopped the deterioration. I even had a plasma exchange, none of that cured the problem.

And then, by 1987, my kidney actually packed up. But in that same year I had to have a triple bypass as well. So I had the triple bypass in 1987, then I had, I went back on dialysis towards the end of 1987. And I was lucky enough in 1988 to get another organ from an unknown donor. That was in ’88 at Easter time.

But even in the short period I was on dialysis, I was on something called CAPD, which means continuous ambulatory peritoneal dialysis, even then I was cycling to work. I was cycling twenty miles a day on my bicycle. I was taking my bags of dialysing fluid with me. I was dialysing in the university where I was teaching and, in general, I always felt pretty good because I’ve always kept myself very fit.

Malcolm tried to be as independent as he could. They couldnt travel and the dialysis equipment...

Malcolm tried to be as independent as he could. They couldnt travel and the dialysis equipment...

I tried to be as self sufficient as I could. I’d do all the dialysing myself and things like that. But yes I’m sure it must have had an effect on her. Especially when she thought that I might be on dialysis for a very long time. Because of course it’s very difficult to travel because the bags are very heavy. And in fact they used to be delivered by a lorry, and there used to be, a lorry would come once a week with this huge volume of bags all contained in cardboard boxes. And they were piled up in the dining room, so that was probably not very pleasant. But I was lucky because it only happened for about four or five months and then after that I was off that again.