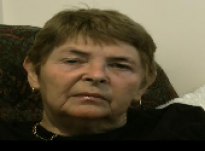 Age at interview: 68
Brief Outline: Jill had a heart transplant in 1990, aged 49. She has been well for around twenty years. She exercises regularly and has taken part in the British, European and World Transplant Games.
Background: Jill is married and has 3 adult children. She is a retired secretary. Ethnic background / nationality' White British.

Jill first realised she had a health problem at the age of 49 when she was washing her car. She noticed that it was taking her quite a long time and that she was feeling breathless. She’d felt breathless and tired for a few months and visited her GP, who referred her to hospital. A few years before this, she’d had cardiomyopathy, a disease of the heart muscle. She’d been given a pacemaker. She was now told that the pacemaker needed adjusting and this is why she’d been feeling so breathless.

Jill was given her medical notes to take to the technician. When she read through them, she saw a sentence saying that she would need a heart transplant. This came as shocking news to Jill as nothing about this had ever been discussed with her. She spoke to the consultant about this immediately and he agreed to refer her to a specialist hospital, where her name would go on the transplant list. At the time she was assessed for transplant, Jill said she received very little information.

Around this time, Jill had been able to manage her daily life but found climbing stairs particularly difficult. Six weeks after being on the list, she received a heart transplant.

After surgery, Jill spent about five days in the intensive care unit and was then transferred to a general ward, where she stayed for five weeks. She noticed almost immediately that she was no longer breathless.

During her recovery, which took about six months, Jill wanted desperately to talk to other people who’d had a heart transplant. She hadn’t realised or been told that there was hospital support group which she could have joined. Three months into her recovery, she joined this support group as secretary and, at the time of interview, was planning to become the vice chairman.

Jill said that, immediately after hospital discharge, she had frequent check-ups and these decreased as time went on. She now attends a clinic twice a year. She is on daily medications and said the side effects she’d had included mouth ulcers, cold sores and facial hair.

Twenty years after her transplant, Jill is fit, well and exercises regularly. She and her husband have taken part in the British, European and World Transplant Games. She advises other people to exercise and to talk to others in a similar situation.

Jill didnt know how long shed have to wait for a transplant, be it a week or several years. She...

They just said it could be a week, it could be months or it could be years. That was all I was told. So I had a bag packed ready, and then the call came. We zoomed off up to [hospital name].

Yes. What had you been able to do before the transplant? I mean at this point you were quite breathless and you had a pacemaker, but day to day what were you able to manage doing?

Well I could function fairly well. I was getting quite close to the stage where I was stopping and starting a lot. I couldn’t walk up hills without really, and the stairs were like Mount Everest and it was like a vice like feeling in my chest.

Were you able to carry on working at this point?

I worked until about six months before my transplant. And then I had to, yeah I didn’t.

Jill has been to the British, European and World Transplant Games. They help raise awareness of...

My husband and I have been to the British, the European and the World Transplant Games and tried to spread awareness in, oh my goodness, all over Europe, Japan, Canada, Bangkok, Thailand, Bangkok is Thailand. And just recently Sweden, Helsinki, Germany, Austria, Dublin, all over, oh everywhere. Something like a hundred medals I think which, of course, is not the important thing. But awareness. I really do think that if you can show that you’re not ill, you’re better, you have no illness after a transplant, that it’s a worthwhile thing to do.

Transplant Support UK, that’s for people who’ve had transplants, that’s for people who’ve had all sorts of organ transplants, and then we have that. And the Transplant Games once a year. In different towns. And the world, if you excel at the British Games, you get selected for the World Games, which I’m waiting to hear about at the moment to see if I’ve done any good for that, to go to  Sweden next year.

But at these World Games, you walk through the town and you mix with the people and you hand out donor cards, so you are training for the Games and you’re also spreading awareness when you get to the actual event. So, for me, I mean there’s lots of things; you don’t have to swim and you can do, you can play darts or you can do snooker. You can do lots and lots of less active things but still spreading the organ donation word.