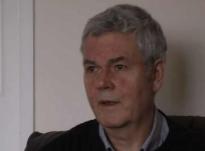 Age at interview: 66
Brief Outline: Graham was diagnosed with rheumatoid arthritis 20 years ago. He mainly copes without medication through his own exercise regimen. He developed labyrynthitis following an allergic reaction to eye drops in hospital, and also has an irregular heartbeat.
Background: Graham lives with his wife and runs his own business. He has 2 grown up children. Graham is a tutor on the Expert Patients Programme and believes that people need to focus more on looking after themselves. Ethnic background: White British.

Graham was diagnosed with rheumatoid arthritis (RA) around 20 years ago. His GP maintains that he has “osteo” arthritis, partly because Graham has successfully managed his own condition using exercise, which included learning to swim as an adult. Fluctuations in the condition are linked to stress, which Graham attributes to running his own business. Graham openly admits, “I don’t take medication,” and he has on occasion challenged GPs about the harm that specific drugs can cause, e.g. steroids. He also uses meditation as a means to reduce stress.

Following investigations in hospital, which involved having drops put in his in eyes, Graham had an “allergic reaction” / infection which led to him getting labyrynthitis: a disturbance of the inner ear which affects balance and hearing. This acute episode is now largely resolved. Again, this was achieved through daily exercises. When he got this rare condition, the most useful help came from a specialist patient website.

Graham believes that the main problem with GPs is that they “don’t take time out to listen to people properly.” However, he also believes that it is down to him to better look after himself as a means of coping with his health conditions. Graham is unusual compared with other people we spoke to in that he is happy to see any GP who is available when he needs to see one. This is linked to the fact that he sees himself as the most important agent in coping with ill health, rather than any health professionals.

Graham believes that he is unusual compared with other people in that he sees it as his job to look after himself rather than leaving it to health care workers.

Graham believes that he is unusual compared with other people in that he sees it as his job to look after himself rather than leaving it to health care workers.

No. Well, just to say, I’m fully supportive of the, NHS and all the healthcare professionals in there. But, the way we done things for the last, you know, since the NHS was founded, when I was born, nineteen forty-eight, [laugh] it’s gotta change, but... Yeah, I suppose I’m a bit of an odd one me, the fact that I believe in looking after myself a lot more, I believe you know, there’s a lot more down to me than down to the health professionals. And that’s, a bit strange, isn’t it?

Do you…is that a personality thing, or did you kind of come to that realisation at some stage?

Graham tries to lead on matters in consultations with his GP. When he challenged a GP about the perceived safety of a specific medicine she got upset.

Graham tries to lead on matters in consultations with his GP. When he challenged a GP about the perceived safety of a specific medicine she got upset.

View topic summary
SHOW TEXT VERSION
EMBED CODE
PRINT TRANSCRIPT
You do all the research, you work out what you want, and then you go in and present that to your GP and say, I want this?

And I’m just interested in how that plays out, and how your GP kind of reacts to that kind of level of expertise, do you think they see it as a threat to their own kind of…?

They do, I went to see… I wanted some more naproxen and, you know, the…this doctor, I see different doctors because I’m not worried about, you know, because I’m pretty confident of what I’m about, and I don’t worry about seeing… I just see the first available one. And this woman doctor, you know, did… wanted to, give me something a bit better than, naproxen. She tried to put me on this diclofenac or whatever it’s called. And you know, she got quite upset when I said no, you know, it’s… it’s dangerous. And she says, well, I don’t think it is if you take it for a short time. I said, I’m not taking it, you know, it’s… it’s dangerous, it’s been withdrawn in some countries, it’s killing, Asian vultures, that, you know, they give it to, cattle in Asia, and the vultures that fed off the dead cattle are, dying, because they can’t take this drug, so, you know. She got a bit annoyed at that [laugh]. But that… that is the only time I’ve brought things like that out, you know. But you know, twenty-one years ago, you know, you… you did what the doctor told you, except for me, you know, I said, I’m not to take steroids, I want an alternative.

When Graham was diagnosed with rheumatoid arthritis he refused steroids and some other medicines. His doctor has doubts about the accuracy of the diagnosis.

When Graham was diagnosed with rheumatoid arthritis he refused steroids and some other medicines. His doctor has doubts about the accuracy of the diagnosis.

View topic summary
SHOW TEXT VERSION
EMBED CODE
PRINT TRANSCRIPT
When I was diagnosed twenty-one years ago, the only things that were on the market was steroids. And I’d read, you know, I read quite a bit, and I read that steroids, you know, the…they knock out your organs, they knock out your liver after a certain time. So I refused to take them, so the doctor, you know, said, I should take Ibuprofen, which I tried and it made me sick. And then we had another talk and he said, well, aspirin is an anti-inflammatory as well as a painkiller, you know, take that. So I took aspirins. But no matter what… when you’ve got rheumatoid arthritis pain, no matter what you take, you know, I’ve never taken anything that takes, you know, kills the pain.

And you were saying that your doctor thinks that you’ve got osteoarthritis rather than rheumatoid, do you want to talk me around that one?

Yeah. It…it’s because I don’t take medication, and I haven’t gone back to the doctors to you know, about my rheumatoid arthritis. I try and manage it myself. And you know, when I have gone back to them, you know, I do a lot of research on what drugs they offer me, and I decided that, you know, I could take this one drug. Recently they offered me diclofenac, I can’t pronounce these words, but another drug that they’ve linked to heart disease.

When Graham thought that he had labyrinthitis he did not find his GP much help. He followed the advice on a specialist web site.

When Graham thought that he had labyrinthitis he did not find his GP much help. He followed the advice on a specialist web site.

View topic summary
SHOW TEXT VERSION
EMBED CODE
PRINT TRANSCRIPT
Now you said that you didn’t go for help with that for quite some time. What did you think was…was going on with you, before you went to see anybody about it?

Well, I thought it was labyrinthitis, because I’m an expert patient tutor, so I tutor people, teach people over a six week course, you know, how to cope with, you know, what’s wrong with them. So, yeah, I get a bit annoyed with the doctor didn’t come out to see me, and didn’t even follow-up afterwards. And as I say, I went on this labyrinthitis website, and I found it very good. They told me to stop taking the antipsychotic drugs because they didn’t help, they didn’t, you know, they just alter your mind so that you, you know, you [laugh] you don’t notice [laugh] that you’ve got problems. They said the thing… the best thing you could do was, you know, try these. And there’s a specific set of exercises you have to do, and they outline those, you know, well, they named them, and then I went on another website and found where they were. And simple things like sitting on the bed with your eyes closed, and then standing up, you know, I couldn’t do that for three months, but after the three months I’ve gradually been able to close my eyes and stand up straight without falling over.

Graham feels that doctors don’t always take the time to listen properly to patients. He has undertaken courses on effective medical communication that highlight the gap between reality and the ideal situation.

Graham feels that doctors don’t always take the time to listen properly to patients. He has undertaken courses on effective medical communication that highlight the gap between reality and the ideal situation.

View topic summary
SHOW TEXT VERSION
EMBED CODE
PRINT TRANSCRIPT
So you don’t have a very high opinion of your GP by the sounds of it?

Well, [laugh] sometimes. They’ve got a lot of constraints and I suppose we don’t help. I’m on the…you know, one of the biggest problems I think with GPs, and it comes out in the courses that I run, is they don’t take time out to listen to people properly, or they don’t, you know…I’ve done a, I’ve been doing some courses online that interest me from the Open University. They’ve got some new courses on the FutureLearn there. And sometimes they’re three week courses, six weeks, you know, a couple of hours a day. And one was on medicine and adherence, and they just, you know, most of the doctors give you drugs, you know, to see if they help. If they don’t they give you another drug, you know, and they seem to be, you know, seeing which one works, because not all drugs work well with people. And, um, you know, they don’t get down the root. And there was... this was a, one of the leading hospitals in, I think it was St Bartholomew’s, wasn’t it, in London, or one of…one of the saint hospitals. And they were trying to teach GPs how to talk to the patients properly, so they would, you know, take their medication properly.