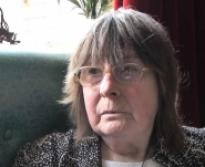 Age at interview: 67
Brief Outline: Rosemary has type I diabetes, asthma, Chronic Obstructive Pulmonary Disease (COPD), rheumatoid and osteoarthritis and hearing impairment; in the past she has had a heart attack, several strokes, tuberculosis and a collapsed lung.
Background: Rosemary is divorced with 5 adult children. She is a retired domestic worker. Ethnic Background: White British.

Rosemary links her numerous health problems to childhood poverty. She began taking insulin for type I diabetes in her 30s. She went on to develop rheumatoid and osteo-arthritis, which cause her main problems — pain and disability. She had a stroke in the 1990s and began taking aspirin. She has had other minor strokes since but never serious enough to be hospitalised. She had a heart attack in 2000. Rosemary also has asthma and Chronic Obstructive Pulmonary Disease (COPD) and previously had a collapsed lung. She takes eight tablets daily and another weekly.

Rosemary says that overall she would “like to have known more information about everything.” When asked, Rosemary states that she prioritises diabetes: “[it is] the main thing and if I could have a miracle and get rid of it, it would be that. The others, you know, you can learn to live with.” Managing diabetes takes a lot of time.

Rosemary says that she has a good GP but he is popular and so “all the patients want to go to him.” “He is good and is very thorough”. Generally she thinks that GPs are overworked. She sometimes feels in a quandary with medical advice, e.g. when told a new medicine might make her blood sugars high. Her advice for patients is: “[if] there’s something specific you want to bring up, bring it up because otherwise it will be forgotten in listening to what the consultant is saying.”

Rosemary describes a difficult balance between controlling diabetes and not putting on weight (through eating too many carbohydrates). She has Diabetic neuropathy and a blocked artery in one of her legs makes walking difficult. She has been told by doctors that they wouldn’t do an operation to unblock arteries, but she recalls no explanation as to why. Rosemary got a mobility scooter as walking everywhere – as she has done all her life – was becoming too time consuming.

Rosemary feels that she has no “connection” with consultants as she sees a different one every time: “there’s no follow on if you know what I mean.” She advises patients to help each other with relevant advice and information.

Rosemary was told she could not have a particular treatment because it would raise her blood sugar. She turned down the treatment but feels anxious about the right course of action.

Rosemary was told she could not have a particular treatment because it would raise her blood sugar. She turned down the treatment but feels anxious about the right course of action.

View topic summary
SHOW TEXT VERSION
EMBED CODE
PRINT TRANSCRIPT
Do you feel that the GP prioritises things in the same way as you do, or is there a mismatch between what’s important to you and them?

Well, there’s never very long with a GP because they’re so overworked and when you’ve got a popular GP of course he, all the patients want to go to him. He’s very thorough. He is good and is very thorough but when I go to the different consultants at the hospital like the diabetic and so on, the rheumatoid consultant. Who else do I go to? They wanted, now, something that happened recently. If I take, “We can’t give you so and so because it’ll make your blood sugar go high.” And that’s the only time I’ve really turned down anything simply because it would have been a worry to me, although I should have all the time in the world to, you know, sort things out. The last thing I wanted was having to having to explain, when you go to the diabetic consultant, why your sugar has gone high, you know.

Because you’re always being told, you’re not really told off but they keep on to you, “Keep it, you know, keep it right,” sort of thing and it’s not always easy to do that, and when you get a flare, when I get a flare-up of what they call rheumatoid, when you see all lumps here.

And sometimes, in fact, I went to my GP for the first time in about a year a few weeks back, the hand the hand was swollen, and you can see it’s swollen now can’t you?

I, you know, I just, what was the question? What was I saying? Oh, I do lose track.

I’ve forgotten now, the question. Just whether looking after one condition makes it harder for you to look after the others in any way really?

Yeah, I mean I think there’s maybe something they could give me or things that they could do, which would certainly affect the diabetes like he said, the consultant, not my GP, that’ll make your sugar high. So you know, it leaves me in a quandary, what do I do?

Rosemary complains that she sees a different consultant every time she goes to a diabetes clinic. She feels a lack of connection with her consultants and a lack of follow-on in her care.

Rosemary complains that she sees a different consultant every time she goes to a diabetes clinic. She feels a lack of connection with her consultants and a lack of follow-on in her care.

View topic summary
SHOW TEXT VERSION
EMBED CODE
PRINT TRANSCRIPT
You don’t see the same consultant, I mean I see a different consultant every time I go to the clinic, so you can’t get any connection and sort of carrying on the conversation I had last time, you know. But I suppose that’s the way, you know, nobody’s fault, not the hospital’s, just one of those things. There’s no, what was it, like there is with your GP, you know, whatever you call that? I’ve forgotten the word. Do you know what I mean? Do you understand what I mean or not?

Do you mean there’s no, you can’t go and see the same person each time or?

Yeah, I mean I don’t really, I don’t expect that I should stay with one consultant. I mean there’s no follow on unless the next consultant, different consultant you see can really follow what the previous one I’d seen has written down and know exactly what went on, oh, I’m getting myself in a muddle here but you know what I mean.

Do you mean that things not get missed but they get suggested and then never put into practice or?

Well, I could, now when I go to the diabetic clinic again in June, I could say, “Oh, when I saw you in December, you said, you know, you was going, you were going to contact my GP and.” And I’d have said, “What was the outcome? Did you decide anything between you?” But because I don’t think he’ll mention it, I mean there’s no follow on, if you know what I mean.

Rosemary finds her GP surgery helpful in getting repeat prescriptions. She speaks of an open and trusting relationship with her GP and only takes medicines her doctor advises her to.

Rosemary finds her GP surgery helpful in getting repeat prescriptions. She speaks of an open and trusting relationship with her GP and only takes medicines her doctor advises her to.

View topic summary
SHOW TEXT VERSION
EMBED CODE
PRINT TRANSCRIPT
Oh yeah and always very good, you know, they, you know, always, they’re always helpful and, as I say, you’ve always got a specialist nurse or another nurse is available, when you can’t see the consultant to get, you know, you could ring up for advice.

I mean like my GP, I said recently I saw him, first time for nearly a year because he’s given me, you know, he’s told me what to do. And when I need a repeat prescriptions, he gives me them because he knows, you know, I have to take them. I don’t take any tablet unless I’m told to by him. You know, I don’t go to the doctors and say, “I’ve got this. I’ve got that.” Because I won’t. I just, you know, stay at the basics, the specifics, you know, just get, “What can I do about this, doctor?” And he’ll say, well, either I go on medication or what other else to do, and when he signs the repeat prescriptions, he knows I need them.

Rosemary advises people with multiple health problems to keep appointments, listen to doctors, take the medication and “get on with it.”

Rosemary advises people with multiple health problems to keep appointments, listen to doctors, take the medication and “get on with it.”

View topic summary
SHOW TEXT VERSION
EMBED CODE
PRINT TRANSCRIPT
What messages might you give to somebody else who might be living with more than one condition?

Well, same as any other I suppose, keep all your, make sure you keep all your appointments and listen to what the consultants are saying, take all the medication they prescribed and get on with it, sort of thing [laughs]. I mean I’m of the opinion that there’s always other people worse off, you know, so let the doctors try and sort them out, you know.
Previous Page
Next Page