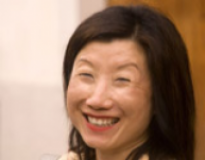 Age at interview: 48
Age at diagnosis: 46
Brief Outline: Sarah, a married mother of 4, is Chinese and came to the UK from Hong Kong when she got married. She was diagnosed with depression when she was 46. Sarah gets a lot of comfort from her religion - she says she would feel very depressed without it.
Background: Housewife, married with 2 adult children and 2 younger children. Ethnic background/nationality: Chinese (born in China).

Sarah came to the UK from Hong Kong when she got married. When she arrived she had no friends or family here and found it difficult balancing looking after her children and business. Her mental health problems began when her takeaway business was harassed and threatened by gangsters - she stopped sleeping but felt reluctant to take sleeping tablets that the doctor gave her. The costs of running the business also caused her concern and made her lose her appetite and feel unwell.

As a result of her mental health problems, Sarah is unable to work. She says she feels very stressed and has pains in her chest and back; she often cries and sometimes feels like she doesn't want to live any more. She says feeling unwell can also make her be very strict with her children and cause tension and arguments with her husband.

Sarah has found it difficult to communicate with doctors and others because she does not speak English. When she has had problems using an interpreter, and says they sometimes do not just translate but interfere in the conversation. Her doctors did not supply an interpreter and refused to allow her to make an appointment unless she provided one - sometimes her children help with interpreting. In general, Sarah found it difficult to get an appointment with her doctor, and at first she thought she being discriminated against, but later realised everyone was treated the same. She says she felt bad for bothering her doctor all the time; on one occasion she says he would not tell her how to take her medication properly and made her feel guilty for taking up his time saying she should have asked her daughter. She doesn't feel like there is time to discuss how she feels with her doctor.

Her GP referred her to an organisation for people of Chinese origin so that she could get support in her own language' this organisation helped her to sort out her social security benefits, and gave her support and counselling. She also joins in with their activities.

Sarah finds comfort in her religion (Christianity), and says she would probably get depressed without it. She has got help and support from her new church, but thinks that if people in her church knew about her mental health problems they would see her differently. Sarah uses prayer and walking to relieve her stress.

Sarah began having difficulty sleeping when gangsters were threatening her and her husband in...

Sarah began having difficulty sleeping when gangsters were threatening her and her husband in...

View topic summary
HIDE TEXT
PRINT TRANSCRIPT
Honestly, I felt that I'm stressed because of council, as I rent a place from council for business that gave me headache.

Can you tell me a bit more, like what happened?

That area got a lot of gangsters around, who bully us. They always come to our store and affect our work, so we are very worry about that. Once those gangsters want to take advantage of us and not paying, I told my husband to close the store on the day and took a stick to lock the door. Then they thought we want to use the stick to beat them, they immediately threw a glass to my husband and he bleed. We called the police immediately and the police came. I was afraid, there were ambulance and everything. Luckily he got hurt at arms, if was on the face then would be terrible. They thought we were to beat them, the police said they found them, but for me, that's still worrying. Thus we moved. Starting from then I can't sleep every night'

They  came to harass us everyday, threw eggs, harass us, it's such a headache. They came and asked, 'Can you give us something to eat?' Then I replied, 'No, we are running business, we can't give you food.' Then they threw eggs to our store. They would throw eggs into our store, or onto our wall, sometimes to the ceiling'

We have to pay rent everyday but can't run the business  later when they raise the rent I told them I couldn't afford, they then reduced the rent a bit. Later I told them that my business couldn't run, and could I pay in instalment, they allowed. I didn't know that when I pay by instalment, they charge me interest everyday. The interest accumulated' then at about the incident happened, about a year ago I want to sell it, and when my husband agreed, we went to tell council we would like to sell and asked about how much we have to pay back, waaooo, then the interest just keep adding'from year 2001 we don't have much income as we were harassed by them, then 2002, as we didn't earn much, then we asked could we pay by instalment, e.g. others have to pay, let say, by the beginning of the month they have to pay for the whole quarter, I said I couldn't afford to pay a lump sum as I couldn't pay as I didn't get any money at the beginning as no earning, but I didn't realize I have to write that all down, as we don't know much about legal problems. Then I pay monthly, and then they add by 2003 till 2006. That gave me heavy headache everyday, I didn't even have appetite. I don't feel well.

She says it's difficult to communicate with her GP without her children to interpret for her. ...

She says it's difficult to communicate with her GP without her children to interpret for her. ...

View topic summary
HIDE TEXT
PRINT TRANSCRIPT
Before when I went to see the doctor, communication is not easy. When I make appointment, I was told that I need to bring someone along then they could help me. I told them that my children are busy and I have to come alone. Then I could not make appointment. Sometimes the people there would be very unhappy about it [chuckle]. They are very unhappy. Later I went to, in the past I lived in [area], then I moved [further north]. Those Indians, later, understand me better. They would let me see the doctor. Sometimes if I go alone they would let me see the doctor. Later they have Chinese to help them, which is much better. They would then let us see the doctor. But still whenever I go to see the doctor he would said' 'you are not ill actually' [chuckle]. I said' 'I feel painful here.', then he would said' 'that is due to stress, you need to relax.' Just like that. Then my daughter said' 'Mummy, the doctor said you are not ill.' Then I just ignore it for some times, until I moved here and met the GP here. When I changed to this GP the receptionist is just awful.

She told her doctor she had an "uncomfortable" feeling in her chest and back pain. (Original in...

She told her doctor she had an "uncomfortable" feeling in her chest and back pain. (Original in...

View topic summary
HIDE TEXT
PRINT TRANSCRIPT
But still whenever I go to see the doctor he would said' 'you are not ill actually'. [chuckle] I said' 'I feel painful here.', then he would said' 'that is due to stress, you need to relax.' Just like that'

I always want to reduce my stress. I always feel like I have a lot of things to think about. Like I feel uncomfortable at my chest, I went for check up in hospital and said I am fine. I still feel that uncomfortable feeling at chest all the time. I hope that counselling could help.

You said you were sent to hospital for check up. What was the check about? Where did you go for it?

Check at [local hospital] they said I am alright.

Doctor said you are fine after heart check up?

Yes, no problem with my heart. But feel pressed at chest. And after taking this medication, the side effect of it is pressure. You worried there would be side effect. My back feels very painful.

From what you said seems that you were not formally referred to psychiatrist by your GP.

View topic summary
HIDE TEXT
PRINT TRANSCRIPT
Do you have any other ways to release your stress, other than these?

No, not really. Prayers I guess, I pray, and also church.

How about in your daily life? You would pray right?

Ya, pray, and leave it to God.

Nothing other than these?

no, I don't do any other things.

What about exercises then?

Oh yes, I do exercises. I walk in parks, greet others [chuckle].

She's worried if she tells people they will see her differently. (Original interview in Cantonese...

She's worried if she tells people they will see her differently. (Original interview in Cantonese...

View topic summary
HIDE TEXT
PRINT TRANSCRIPT
Like what you just said, you feel you are being very emotional, and worried whether you have slight depression. Do you find it difficult, as a Chinese, to share these with others? Or would you have any worries in that?

It's difficult and I can't tell others. If I tell others they may think I am a bit crazy [Chuckle]. You can tell them you are not feeling well, it's ok to say so. If you say about that, they will feel that you are different and will see you differently.

Some would say, 'don't talk to her that much, she's a bit depressed.' They would say so. There are people who have depression in our church, they may talk about it and repeat it as they forget, and others would find them troublesome and not feeling like to talk with them that much. If you were in their shoes and you hear these, you won't feel happy about it right? If it's nothing special it's better not to talk about it that much. Like when you feel ill, with your body, others actually can't help you. They could not help you, some may even step on you, 'You made yourself like that, and you should take it easy.' When they do so you would not want to talk about it further.