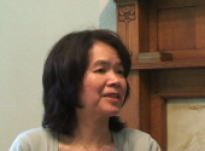 Age at interview: 51
Brief Outline: Vicky's menopausal symptoms include hot flushes, sweats, irritability, poor sleep and joint pain. A herbal remedy helped alleviate joint pain, but she has not sought help for other symptoms. At 51 she feels old, tired, less competitive and less ambitious.
Background: Vicky has her own takeaway business. She is married with an two teenage daughters. She started the menopause at age 50. Ethnic background/nationality' Chinese.

Unlike her twin sister (MEN34) who has found the menopause a positive experience, Vicky describes her menopause as ‘troublesome’. A year ago, at age 50, Vicky first experienced pain in her hands and feet' ‘my heels hurt and walking was painful’. Her doctor recommended she buy a herbal remedy from a health shop – ‘it begins with a ‘g’’ - which stopped the pain. At the same time her periods started to become irregular and lighter and she began to get hot flushes and sweats even in winter' ‘I was very hot and if you felt my forehead, there was sweat, it was wet’.

Alongside this, Vicky has had problems sleeping through the night and has become increasingly irritable ‘like I wanted to find someone to have an argument with’. She has had to control her temper in front of her husband who ‘doesn’t like people who rant unreasonably’ and ‘doesn’t understand what menopause is about for women’. She has tried telling him about the menopause so that he better understands her symptoms.

Vicki and her husband run their own business; a takeaway. With menopausal symptoms as well as a hectic work life, she gets tired easily but adopts a pragmatic approach' ‘sometimes the menopause can make you feel low but you still have to go to work’. Although she consulted her doctor about joint pain, Vicky has not felt it necessary to discuss her other symptoms or to seek treatment. While unpleasant, she accepts the menopause and its symptoms as a fact of life.

For Vicky, the menopause and how women feel about getting older is tied up with attitude and ‘the way you see things’. She believes that while Westerners are ‘very happy and youthful’ regardless of age, Chinese people are a bit more conservative, regarding 60 as ‘very old’. She describes herself as ‘very old now’, less competitive, less ambitious and lacking in self-confidence, but believes this has nothing to do with the menopause. Rather, feeling old for Vicky reflects a lifetime of working in the takeaway, unable to integrate into society and learn English. She believes that Chinese people are more likely to ‘put all their troubles on their faces’.

Vicky was interviewed for Healthtalkonline in June 2009.

Vicky wondered what was wrong when she first missed a period. She thought there was a problem...

Vicky wondered what was wrong when she first missed a period. She thought there was a problem...

People get scared when their periods stop, get worried, is there something wrong with me? Is there something wrong with my body that has caused my periods to stop? At first that is what I thought, I missed a period and then the next month too, is there a problem with my body? Because it had not happened before, I didn’t know what it was, now I have been through it, I know that is a sign of the menopause, so I tell other people there is no need to worry.

Vicky tries to control her temper because her husband doesnt like people who rant unreasonably...

Vicky tries to control her temper because her husband doesnt like people who rant unreasonably...

So have you tried explaining it to your husband?

Yes, yes, I have told him, so when women get to 50 this is what happens etc etc because I have heard that men get menopause too, is that true?

Yes, because when I heard that men had menopause too I didn’t know if it was true. Because sometimes my husband can lose his temper and find someone to shout at and I thought it might be menopause because he is about the same age as me.

When you told your husband you were menopausal, how did he react?

He said ‘oh, is that what it’s like, I didn’t know’ because he didn’t know.

Vicky, a Chinese woman, comments on the differing attitudes to ageing among Chinese and Western...

Vicky, a Chinese woman, comments on the differing attitudes to ageing among Chinese and Western...

So how do you feel about getting older now?

I feel that at every stage in life, the steps you take are different. For example when you are 20, the paths that you take are different from the thoughts that you have when you are 50. When you are 40-50, you feel very old, I feel like I am very old now. Now I have reached 50, middle-aged, I think, wah, how quick! Now I feel less competitive and less ambitious. When I was younger, I was very competitive and wanted a career, I wasn’t afraid of hardship, but now I am 50, I get tired easily, I have less will to fight. I want a steady life – that will make me satisfied. I don’t want a career anymore, I don’t have that idea in my head anymore and I think it’s to do with my age

So do you think that Westerners’ views about the menopause might be different from Chinese people?

I don’t know what the menopause is like for Westerners, but based on my guess there shouldn’t be much difference between Chinese and Westerners. Westerners would still be very happy, laughing hee hee ha ha everyday like they have no care in the world but Chinese put all their troubles on their faces and as soon as you look at them you think this person is very unhappy. Chinese and Westerners are very different.

I think it is because Chinese people are more conservative and don’t have that kind of courage that Westerners have so even when they have worries they put them aside but Chinese people always wear their worries on their faces.