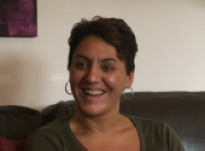 Age at interview: 45
Brief Outline: When her periods became increasingly frequent at 40 and she started to have hot flushes, Sonia felt too young to be menopausal. In a public workplace with male colleagues, she found her symptoms embarrassing. A Mirena coil helped control the bleeding.
Background: Sonia is a retail assistant. She is divorced with a teenage daughter. She started the menopause at age 40. Ethnic background/nationality' British Italian.

Sonia’s menopause story started at the age of 40 when she found her periods becoming increasingly irregular, heavy and close together. Bleeding every two weeks for seven days at a time had a significant impact on her quality of life, leaving her feeling drained, moody, tired, uninterested in sex and quite depressed, ‘I didn’t feel like I wanted to go out because I was bloated, I just felt frumpy and horrible really’.

Referred by her GP to a women’s clinic at her local hospital, blood tests confirmed that Sonia had started the menopause. Unwilling to take HRT because of the risk of cancer, Sonia was fitted with a Mirena coil, which not only regulated her periods but acted as a contraceptive. Much to her delight, after six months her periods suddenly stopped. Over time her hot flushes have become infrequent and her mood swings have leveled out. She now feels more lively and ‘back to my old self’. Sonia has check-ups every couple of years and hopes that she may not need to have another Mirena coil fitted when it needs replacing after five years.

Working on the shop floor has had its challenges for Sonia during the menopause. Unable to predict when her periods might start, she carried pads around with her all the time in case her period came on suddenly, ‘it wasn’t very nice because you can’t go home’. Hot flushes, which left her face ‘rosy’, were particularly embarrassing with Sonia finding relief by fanning herself or going into the cool room. As her tiredness increased, she became more and more irritable and impatient.

In the female dominated retail sector, Sonia has found talking to her colleagues about the menopause helpful, though feels uncomfortable and embarrassed discussing her symptoms with her boss and other male colleagues. She feels there is a stigma attached to the menopause, ‘if you’re over forty and you’re a bit that way, people do say, “Oh, PMTish or menopausalish’.

Sonia found starting the menopause at 40 difficult, marking the beginning of getting old ‘where it all does down hill’. She has noticed changes in her general health with increased joint aches and pains as well as feeling more prone to chest infections. Adopting a positive attitude, however, she sees the menopause as a time to ‘re-evaluate yourself and look at life’. She exercises regularly and is hoping to give up smoking.

Sonia was interviewed for Healthtalkonline in October 2009.

So you said that you were bleeding a lot and very regularly. What impact did that have on your life?

A hell of a lot really because I was quite an active person so I used to cycle a lot. I liked swimming. So I was quite active and I felt that I couldn’t do all those things because I didn’t wear tampons. I’d stopped wearing them about ten years ago. So I was just using pads so with swimming and stuff I couldn’t really do that as much. I didn’t feel like I wanted to go out because I was bloated. I just felt frumpy and horrible really.

What about at work? How did it affect you at work?

Same thing at work, just quite down, and normally I’m quite an upbeat person, I’ve got quite a lively personality. And I was quite down a lot of the time obviously because of the bleeding and it just used to drain me. I wanted to sleep a lot as well, yeah, that was one thing, sleeping.

They did send me up to the hospital. I was at the women’s clinic because I’ve been up there a couple of times. And they did a laparoscopy or, the camera inside. Oh, that’s right. Yes, I do remember now they said that I had adhesions in the tubes from the time before I had my daughter. I had pelvic inflammatory disease so that caused me to have adhesions which had obviously stayed there. So that’s what they could see so that actually was a contributing factor as well.

And they suggested HRT and I didn’t want that so they then said to me, “Well, you can have the Mirena coil.” They explained in some people it does actually stop the periods. So I decided to give it a go. And I’ve been on that for the last two years and it’s helped me with obviously not having any periods so I don’t have any bleeding. I do get the occasional flushes but nothing that’s warranted, that I worry about it. The bleeding has totally stopped. So at the moment, touch wood, it’s quite good and it’s worked well for me.

So you decided on the Mirena coil? And how was that fitted?

Again, I had to go back up to the women’s clinic and go up there and that was quite painful actually having that fitted.

And how long until that had positive effects for you?

It took at least six months. I was still having periods up until six months after and then all of a sudden they just stopped.

Were they as bad all that time as they were?

Yeah, they were actually. They weren’t that great, I was still bleeding irregularly.

Did they tell you it would take some time?

Yeah, they did. They said it could take at least six months for it to get into your system and to work properly because obviously it releases the hormone very slowly. So it has to get into the system. But after the six months, by the end of the year, that first year, nothing.

And did they talk about the contraceptive effects that that would have as well?

Yeah, they said it’s a contraception.

So how long will you have that Mirena coil? Do you have to have it replaced regularly?

It’s five-yearly intervals. I’ve got a check-up coming up soon. So that’s after two, three years, yeah. So they check it every so often but after five years it has to be replaced.

Sonia, a union rep, feels self-conscious about her rosy face in meetings

Sonia, a union rep, feels self-conscious about her rosy face in meetings

Hot flushes, kind of not so much but occasionally they were happening whilst I was working and at home. Especially at work if I was in a meeting or something because I’m a union rep, so I have to attend meetings at different times during my course of work. So I’d be in a meeting and all of a sudden I would just have a hot flush for no apparent reason. So that became a bit of a problem.

I would just all of a sudden be in a situation, like I said mainly when I was in meetings or whatever usually close proximity with somebody. And I could just feel myself building up, from my stomach coming up and then all of a sudden I’d have this rosy face. And it would stay there for twenty minutes or so afterwards, I’d come out of the meeting and I’d just be sat there and I’d be thinking, “God, how can I cool down?”

Were you aware of it in the meeting. Did you feel it come?

I could feel it, yeah, I could feel it and I was aware that other people could see it as well because I would go in, in front of them and I’d be quite normal and then all of a sudden this would build up and it was like it was quite embarrassing. And in other social situations as well when I was around other people, friends and stuff.

Did anybody say anything?

No, they would just sort of comment say, “Oh, you’ve got a red face” and I’d just say, “Yeah, I just feel a bit hot.” Just start waving my hands.