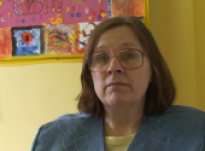 Age at interview: 59
Brief Outline: Despite hot flushes and eighteen months of erratic periods, Maureen feels she sailed through the menopause. She describes it as a liberating experience bringing relief from the pain and inconvenience of periods, as well as increased self-confidence.
Background: Maureen is a support care worker. She is divorced with four adult children. She started the menopause at age 45 and had her last period at 47. Ethnic background/nationality' White British.

Knowing little about the menopause, Maureen thought she might be pregnant when she first noticed her periods becoming irregular in her mid-forties. Relieved when tests proved negative, she was delighted when eighteen months later her periods stopped completely, thus freeing her from the ‘undignified’ monthly routine of aches, pains and ‘the messy stuff’ of heavy bleeding and sanitary pads.

Maureen feels that she ‘sailed through’ the menopause, despite having hot flushes which continued for 6-12 months after her final period and made her feel ‘really uncomfortable, niggly, moody and tired’. Initially embarrassed in public, she soon realized that although she felt like a ‘Belisha beacon’, nobody really noticed her hot flushes. In keeping with a life-long aversion to doctors, Maureen preferred not to seek medical advice or treatment for her symptoms. Instead, she coped during the day by discretely wafting a piece of paper, and at night by using a fan, opening the windows and searching out cooler places in bed.

In retrospect, Maureen wishes that she had had more information about the menopause to prepare her for the symptoms she experienced and to advise on possible treatment options. She believes that as they approach the menopause, women should be sent information by their doctor, with recommendations for reading and an invitation to ‘come in and talk about it’.  She also feels that chemists should provide leaflets about the menopause, as they currently do for other conditions.

Since her periods ended, Maureen has felt younger, happier, freer and more confident. She is reluctant, however, to freely admit her age, preferring to think of herself as ‘sexy, feminine, youthful and pretty’ rather than old. She does not identity with society’s image of the older women who ‘acts old and dresses in old woolly cardies and sensible shoes’.

Maureen was interviewed for Healthtalkonline in March 2009.

Just kept waking up being really hot and throwing the blankets off me or the duvet off me. And was just lying there with my arms and legs spread eagled, trying to get every bit of me to have a bit of cool air somewhere, open the windows and hope the cool air’s going to hit me everywhere.

So that must have been quite difficult?

Yeah. And sort of tossing into a cooler place because I’ve got a double bed and of course I’m boiling hot there so I’d move over to a cooler part. And then when that’s hot try and move to another cooler part. Yeah.

How many flushes were you having a night, how often was it happening?

Maureen says it would be helpful if GPs routinely gave women information when they reach a...

Maureen says it would be helpful if GPs routinely gave women information when they reach a...

I think that when women come to a certain age, I mean I know there’s no particular age for the menopause but say, 35 or something, that they’d choose an age and then they should send all these patients some literature advising them to come in and talk about it, like you can with diabetes classes and stuff, to come in and talk about it and have a little group of four, five, six or something or recommend some leaflets or books or something. Because I knew nothing, I knew nothing.
Did you try and find some books and information on it at all yourself?

I didn’t think there were any. I just didn’t think to look for anything. I mean you go in the chemist and you pick leaflets up on all sorts of things but there was never anything to do with that.

Maureen refuses to admit her age. She wants people to think shes younger than she is

Maureen refuses to admit her age. She wants people to think shes younger than she is

No. No, I’ve never felt better. No. In years yeah like I said I hate putting my name down, I hate putting my age down on anything and if anybody asks me my age I just say “I’d have to kill you if I told you”, I could not tell people my age. But I do feel younger even, I might not look it but inside I feel younger and happier and freer.

Why do you have a problem with your age in terms of not wanting to admit how old you are?

That’s a good question. I wish I knew the answer to that.

I really don’t know. I didn’t have any problems telling you did I?

Well you did hesitate a little when you were filling in the form.

Why is that important do you think?

Because I feel sexy if I’m younger. I feel feminine. I’m youthful and pretty. That’s why. All the things that I want to feel I can feel as long as I’m young. If I admit that I’m old or getting old I’m expected to dress in old woolly cardies and sensible shoes and act like I’m old.