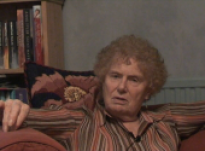 Age at interview: 77
Brief Outline: Tiredness, irritability and hot flushes in her fifties led Janet to take HRT. Symptoms returned after discontinuing HRT 12 years later. Resumed HRT for a few years but stopped after heavy bleed. At 77, no longer on HRT but still gets hot flushes.
Background: Janet is a retired probation officer. She is widowed with four adult children. She started the menopause at age 55 and was a long-term user of HRT until four years ago. Ethnic background/nationality' White British.

In her mid-fifties, Janet started to get menopausal symptoms including erratic periods, irritability, aches and pains, tiredness and hot flushes. Not wanting to ‘become an old lady’, she thought HRT might help her maintain the energy and lifestyle she was used to. Referred to a Well Woman clinic by her male GP, she was prescribed a combination HRT which she continued to take for around twelve years.

A chance comment from her dentist about the length of time she had been on HRT as well as media scares about the risks associated with long-term use, led Janet to discontinue HRT. Within a year her symptoms returned. Seeing her GP, she explained that while she would like to go back on HRT, she ‘didn’t really want to be having periods if I get to eighty’. Prescribed a non-bleed HRT, her periods stopped, the hot flushes eased and she regained her energy. She remained on HRT for a further few years. Following an unexpected heavy bleed, however, Janet’s GP advised her to stop taking HRT and return if she had further bleeding.

Four years later, Janet has had no further problems. At 77, however, she never imagined she would still be getting irritating hot flushes, ‘I sit here sometimes in the evening, my feet are really cold and then I’m suddenly [phew] getting a hot flush’. She wonders if HRT merely delays hot flushes. Despite this, Janet remains committed to the benefits of HRT. She would ‘definitely’ take it again if she had her time over and recommend it to others as long as they were aware of the risks.

Janet feels she has had ‘a good menopause’ which has not really changed her life. She keeps fit by swimming regularly and although she has aching joints and not as much energy as before, she puts this down more to age than the menopause. She feels that HRT has helped her ’to age well’ in comparison to other women in her age group.

Janet was interviewed for Healthtalkonline in November 2009.

So I went back to him to talk about it, the GP, and I said, “The only thing that puts me off, I don’t really want to be having periods if I get to 80 and I’m still on it and I don’t want to be having periods. That’s ridiculous.” So he said, “Well, I could put you on another one where you don’t have the oestrogen.” And he said, “Most.” I remember him saying something like, “Most of the ladies that I’ve prescribed this find it much better and they don’t really have bleeding. Occasionally, you might get a bit of spotting.” So I said, “Fine.” So he prescribed this so I started taking that and I suppose I was taking it, I don’t know how many years, perhaps two three years, which was, on top of the previous years I’d been taking the combination one.

I think men need to be aware that it’s not always easy and that it’s possible it could affect their sex lives. Of course it can because there can be dryness and irritability and tiredness. So they probably won’t respond in the same sort of way and I think that men need to know that. And they need to accept it and try and be tolerant about it. But apart from that I can’t think. I mean if you’ve been married to someone or are in a relationship with somebody there are faults on both sides or things in the other person. Very rarely you’d be with somebody and not find fault. But you live with it don’t you, you have to or you do the other thing. So I think they just have to be aware of it and yes, she may feel a bit different and [have a] different attitude toward certain things but that’s all I can say really.