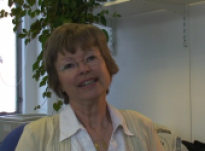 Age at interview: 64
Brief Outline: Jane is a staunch advocate of HRT, taking it continuously for 15 years. She believes the benefits, including preventing osteoporosis, outweigh the disadvantages. Recently prescribed vaginal tablets to alleviate thinning of vaginal wall.
Background: Jane is a research lecturer. She is married with three adult children. She started the menopause at age 50 and has been taking HRT for the past 15 years. Ethnic background/nationality' White British.

In an era when HRT was being promoted in the media as a wonder drug with ‘nothing negative about it’, Jane’s decision to go on HRT fifteen years ago seemed ‘the sensible thing to do’. With a family history of osteoporosis, she believed that HRT would not only offer relief from occasional hot flushes but, more importantly, protect her bones.

Jane has mainly taken HRT in tablet form, after finding that patches caused a skin irritation. She is now taking Elleste Duet 1mg. Aware of the increasing controversy around HRT, Jane has studied articles on HRT in the media and in journals in great detail. Despite reports highlighting a slightly increased risk of breast cancer and cardio-vascular problems associated with long-term HRT use, Jane believes that, for her, the benefits of taking HRT outweigh the disadvantages. Her GP, aware that Jane has read the literature carefully and understands the risks, is happy to continue prescribing HRT. Jane has regular blood pressure checks and mammograms to offset any possible risks from HRT.

Jane had assumed that HRT would also protect her from vaginal problems. Recently, however, she noticed that the vaginal wall was thinning, sometimes causing tearing during sex. After discussing this with her GP she was prescribed Vagifem, a tiny vaginal tablet which she inserted once a day for the first week, then twice a week. She has noticed a marked improvement.

For Jane, the menopause has been a ‘non-event’, with HRT giving her a ‘terrific’ quality of life. She continues to feel very well and full of energy as she balances a hectic life working full-time, helping with her grandchildren and ‘keeping an eye on’ her elderly mother. HRT will continue to be part of her life.

Jane was interviewed for Healthtalkonline in June 2009.

Jane has used Vagifem, a vaginal pessary, to stop her vaginal wall tearing during sex

Jane has used Vagifem, a vaginal pessary, to stop her vaginal wall tearing during sex

There’s only one other thing that you might be interested in is that I didn’t know that HRT didn’t prevent thinning of the vaginal wall. I assumed that since I was on HRT that would protect me from vaginal problems as well and not so long ago I felt that the vaginal wall was thinning a bit because sometimes during sex I tore a little bit. So I discussed that with my GP and she’s suggested something else called Vagifem, which is a tiny, tiny pessary, smaller than a pea which you just insert I think it’s once a day for the first week and then twice a week and that’s already improved matters after only a couple of weeks.

And the GP said that actually a consultant that she knew said that all women over the age of menopause should be told about this and that a lot of women are probably suffering in silence not knowing that this can occur.

Jane has used HRT for 15 years. After extensive research she believes the advantages outweigh the...

Jane has used HRT for 15 years. After extensive research she believes the advantages outweigh the...

Well, I suppose I started thinking about the menopause when I was in my forties because I read about it and HRT hit the headlines and at that stage, HRT was said to be wonderful and there didn’t seem to be any disadvantages. HRT was said to reduce osteoporosis, reduce cardiac troubles in those days. There was nothing negative about it so I think when I got to the age of about 50 and started to have just the odd hot flush my reaction was immediately to go on to HRT, partly because my mother had osteoporosis and other members of the family had had osteoporosis and I dreaded getting osteoporosis and I felt it was the right thing to do. I think I started, it’s quite a long time ago now so I think I started on some tablets and then I tried patches but the patches gave me some skin reactions so I went back to tablets. And there was no problem at all. I never had any side effects. I just felt great.

Then of course the headlines changed a little bit. There was more research on HRT, people started to talk about dangers of increased risk of breast cancer, dangers of increased risk of cardio-vascular problems. So I started looking at the literature and read articles in the BMJ [British Medical Journal] and the Lancet, the British Journal of General Practice, the newspapers, everything I could find. And it seemed to me that the dangers and the risks of HRT had been exaggerated in that people didn’t understand risk.

And for me, the advantages outweigh the disadvantages because I dread getting osteoporosis. The risk of osteoporosis is reduced, also I think the risk of bowel cancer is reduced when you’re taking HRT and the quality of life, for me, has been terrific on HRT so I’m carrying on still taking it.

What is your doctor’s attitude to you being on it for so long?

She’s terrific. She knows I look at the literature and have done the research and understand the risks and in fact I went to see her yesterday partly because I knew this interview was coming up. I thought I’d have a discussion about it since I’ve been on it for about 15 years now, and she agreed with me that the extra risk for breast cancer is actually quite small. And she said that you have a similar extra risk if you’re overweight. So we discussed the other reasons for having extra risk of having breast cancer and she was perfectly happy for me to go on with it.

Now, you said you read up quite a lot about the menopause and about HRT. What sources of information did you use?

I got all my stuff out of a file last night. I kept a whole file on things and they were mainly medical journals like the BMJ [British Medical Journal], the Lancet, British Journal of General Practice but I also looked at I think Cancer Back-up and newspaper articles and anything I could find really.

What was the most helpful do you think?

Oh, probably the BMJ or Lancet. Because I felt those articles were probably backed by reasonable good research.

And I guess the internet wasn’t really around when you first started going.

through the menopause. Have you subsequently used the internet much in your research?

Only a little bit when I’m looking, searching the BMJ for articles on HRT or something like that.