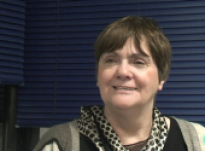 Age at interview: 59
Brief Outline: After a year of irregular periods, Eileen reached the menopause at the age of 56. Asthma, an underactive thyroid and a divorce in midlife have influenced her menopause experience. Apart from mild hot flushes in the past year she has had few symptoms.
Background: Eileen is a finance assistant. She is divorced with three adult sons. She started the menopause at age 55 and had her last period at 56. Ethnic background/nationality' White British.

For Eileen the menopause started four years ago with a missed period. Periods were irregular for a year before stopping. Eileen was surprised not to have many of the symptoms associated with the menopause. She believes that this has been ‘payback’ for the long heavy periods and pain which she suffered monthly from the age of thirteen.

Eileen experienced a series of health problems in her forties, including an underactive thyroid and adult onset asthma for which she is on long-term medication. Alongside this, she has been through a difficult personal time as a result of her divorce. She wonders whether these factors may have somehow masked menopausal symptoms. She notices, for example, that her moods have improved since the menopause but acknowledges that this may be because she has begun to re-establish her life after the divorce.

Eileen describes her menopausal symptoms as minimal. Indeed, it is only in the past year that she has had what she describes as ‘mini hot flushes’ although these have not caused problems. She finds it annoying, however, to have to get up to go to the toilet a couple of times during the night as this disturbs her sleep. Given her lack of symptoms, her general dislike of taking medication, and a family history of breast cancer, Eileen has not considered taking HRT.

Eileen has experienced weight gain and a thickening waistline in recent years which she concedes may in part be due to her medication, in particular the steroids she took for her asthma. She regrets the loss of her ‘female figure’ and the gradual fading of her hair from black to grey. She has also noticed a significant increase in breast size since her late forties which she finds uncomfortable. These body issues concern her, particularly in terms of buying new clothes and dating again.

While Eileen feels that the menopause marks the coming to an end of a big part of her life, she is liberated by the loss of periods and the knowledge that she can no longer fall pregnant.  She wonders, however, how long the menopause might last, given that although she is postmenopausal in terms of her periods ceasing, she is now experiencing mild hot flushes.

Eileen was interviewed for Healthtalkonline in December 2008.

The most positive aspects of the menopause for me have been

Never having to have another period and the knowledge that you know there is absolutely no chance I’m ever going to get pregnant because I think that that would be very difficult. I know there are women who in their late 50s, early 60s have had children by choice but I would find that very wearing and I certainly would not want that, and I would not want to turn my life upside down which maybe people would say is a selfish thing but I think it’s also difficult for a child with older parents.

Oh that is one thing actually that does get me, the hair. The fact that my hair was black and now it’s not. It sort of fades a bit before it greys, it goes quite faded and you just think “but I did like my hair”. It was kind of if I stood with the light behind me in a disco I was a red head because there was so much red in my hair but it was this beautiful glossy black and that is one thing I do regret the fact that as you get older your hair colouring does change and of course your face skin tone changes with it as well. But that’s probably not as noticeable as the fact that the hair is changing.

So is that your natural colour that you have now?

This is much lighter than my natural colour, mostly, I do give it a little help because it, I think once it’s got to the stage of being all white, that’ll be fine but at the moment it’s not, so I will carry on giving it an occasional rinse just to brighten it up slightly.

One of my main problems I find is not so much how other people are treating me because I really don’t feel that there is a great deal of difference but I will stand there doing things and I don’t feel, I’m still 18, and I don’t see any need to change that.

Do you think others see you as 18?

In what ways have you noticed them treating you differently?

I don’t know perhaps if you go to the hairdressers to have your hair cut and this young girl’s doing it she has a perception of what an older person should be like and perhaps the same in the dress shops, they will also have a perception and I feel you can sort of, they say that if you wore the fashion last time round you shouldn’t be wearing it this time. And I agree with that to a great extent but I think you can take bits of the fashion and add it to other things and still make it viable whereas going into the shop and buying that sort of skimpy little top, the girl behind there being all of 16 years old and thinking what’s that old biddy doing with it.