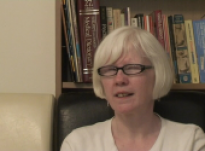 Age at interview: 49
Brief Outline: Despite night sweats and poor memory, Geraldine has had few problems with the menopause. She has taken homeopathic remedies for twelve years to alleviate severe premenstrual tension. She believes this holistic approach will help her through the menopause.
Background: Geraldine is an accountant. She is single with an adult son. She started the menopause at age 47. Ethnic background/nationality' White British.

Geraldine first noticed her periods becoming heavier and more irregular about two years ago. Yet apart from the occasional sleepless night around the time her period is due, and night sweats where she ‘wakes up drenched’, she has been little bothered by physical symptoms.

She describes her memory, however, as ‘shot to pieces’. Her tendency to forget details is particularly evident in her son’s response of ‘I told you that already’ to repeated questions about his work schedule. Strategies, including ‘writing things down and mentally repeating things to myself’, are helping her remember information.

A staunch advocate of homeopathy, Geraldine is confident that this approach will help support her through the hormonal changes of the menopause. Originally consulting her homeopath for severe premenstrual tension twelve years ago, she regards homeopathy as ‘a life saver’ which has given her back her life. She has ‘complete faith’ in her homeopath who she continues to consult two or three times a year, with consultations lasting a half hour or longer. Geraldine believes the strength of homeopathy lies in its holistic approach, with her homeopath focusing not just on physical symptoms but on her life as a whole. She takes homeopathic remedies in the form of small tablets immediately after each consultation, then about every three months as the effects wear off.

In recent years Geraldine has noticed wrinkles, stiffness, and increasingly dry skin. She is unsure, however, whether these changes are associated with the menopause or just getting older. Although she does not buy anti-ageing cosmetics because she ‘can’t see to put them on’, she has started to use stronger moisturizers. And for Geraldine, an albino, getting older has at least one advantage. While friends spend time and money at the hairdressers, Geraldine can now fully appreciate her white hair.

Geraldine was interviewed for Healthtalkonline in June 2009.

Geraldine struggles to remember appointments and details of what shes read at work. At home she...

Geraldine struggles to remember appointments and details of what shes read at work. At home she...

My memory now that is the one thing, memory. Terrible. Oh, I mean I know probably as you go on, as you get older your memory isn’t as good anyhow but oh, my memory is just shot to pieces. I don’t remember, I mean at times I worry about will I be able to continue working because my memory’s so bad. And just I never remember. I mean I suppose it’s a generational thing. My son’s always going, “I told you that.” I think, “I know you did.” But I don’t remember he’s told me, I think, “Well, I know you did but I can’t retain that sort of information.” I don’t lose words. People say they lose the words for things. Now that hasn’t, as yet, happened to me but it’s my memory generally.

So how does it affect you?

I have to write everything down in work. If somebody says, if you phoned me this morning and said, “Jenny will be in to see you at 2 o’clock.” At 2 o’clock somebody will phone me and say, “Jenny’s in to see you.” And I go, “Oh, I completely forgot she was coming.” Things like that or my son would say, “I’m working [da da da] this week.” And I wouldn’t remember. I mean I would know that he’d told me and I even make a mental effort now to try and remember it because I know he’ll go, “I told you that already”. But it’s those sort of things that I forget. I wouldn’t remember details, like I mean obviously I have a lot of keeping up to date with tax and things like that and I would read articles and it used to be I’d read them and they’d go in and I’d remember about them but now I sort of think, “ I think I read something somewhere about that.” Whereas before even if I didn’t remember the exact details, I would remember where I’d seen it and be able to lay my hands on it. It’s things like that which, as I say, I don’t know whether that’s the menopause or whether that’s just getting older anyhow.

So what effect does it have on your job do you think?

Probably none really so far. It’s just that I’m more aware of it and when I forget things and I think, “How could I forget that? Is my memory that bad?” And that just makes me start to think if I can forget that, is it going to start affecting my job. So far I’m not aware of it doing so apart from having to write everything down and where I phone somebody and I say, “Okay, I’ll do that for you.” And then I get another phone call straight away before I’ve had time to write it down, I have to remember and I’m like the next day think, “I didn’t do that.” But, so far there have been no disasters.

Geraldine speaks highly of her homeopath. She sees her two or three times a year

Geraldine speaks highly of her homeopath. She sees her two or three times a year

I just told her that I was having trouble with PMS and she said, “Well, what are the symptoms?” And very simply, “What do you feel like? What are you feeling? What exactly do you feel like?” I mean we discussed in depth, I mean even now when I go to see her I’d usually be there two or three times a year, and I would be there for about half an hour. At first, it would have been longer obviously. I mean, she knows me well now.

And what did she prescribe?

Oh, wee wee tablets, I don’t know. I’m just one of these people that I think, “Well, a professional, I trust her as a professional.” And then she’ll give me, and that I’m the same myself. I'll I do my best with people and she will and I mean I know it can’t do me any harm. So if it had been to the GP and it was drugs and things I would have been checking to see what are the side-effects of this and things but.

What one tablet or a number of tablets or?

Once a month well, no sorry not once a month, once I would take stuff usually it’s you take something, when you go to see her, you take something that night, something the next morning and then just whenever the effects of that wear off, which can be I mean if everything’s going normally it’s about every three months or so. Always repeat the dose but that’s. And it changes now and again. The remedy as she calls it, at times will change.

If you had to sum up, how does her approach differ from the GP’s approach?

The essence of it is it’s holistic really. And she’s not just interested in your physical symptoms, she wants to know about, “How does that feel and what’s that doing to you?” And all that. Just to sum up, to me it is holistic really.

And I think part of my reason maybe for volunteering as well was because it is affecting me so little that I think if you want the spectrum I think, maybe I’m completely wrong, you can tell me, but people volunteer for something like this because they’ve had such a bad time. Now, I don’t know, maybe that’s not right but that was part of my thinking, “Well, I’m coming from the side where I haven’t had any great problems.”