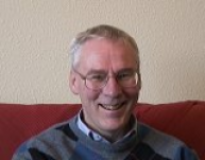 Age at interview: 53
Age at diagnosis: 47
Brief Outline: Diagnosed with Mantle Cell non-Hodgkin's lymhoma in 1999 after a stranger pointed out a lump in his neck. Treated with chemotherapy, a stem cell transplant, and rituximab. In remission.
Background: Retired IT manager in local government, married with four adult children. Ethnic background: White British.

One day, at a church barbeque, a complete stranger, who was a GP, approached him and pointed out that there was a lump in his neck and recommended him to go to his GP. A few days later his GP examined him, announced that he had lots of swollen glands suggesting he possibly had a serious disease, and that he should go to hospital immediately. He went home to tell his wife and family and then on to hospital. He was examined by a consultant who said he probably had lymphoma but needed a biopsy on the lump in his neck to confirm it. The pathology results showed that he had Mantle Cell lymphoma, a relatively newly-recognised and quite aggressive type of non-Hodgkin's lymphoma. A CT scan confirmed that the lymphoma had spread to all of his lymph glands. He was told that his disease could have killed him at any time so he was lucky to have been diagnosed when he was.

He was given six doses of CHOP chemotherapy administered intravenously, during which he was hospitalised five times because of infections. He then had a stem cell transplant with high dose BEAM chemotherapy administered through a Hickman line. He also had blood transfusions to try to build up his immune system. After being discharged from hospital he had to adhere to a neutropenic diet for two months. After three months he was given a course of a monoclonal antibody called rituximab, delivered through his Hickman line.

After being off work for 11 months he returned part-time, but eighteen months later developed shingles and went off sick again for about two months. He returned to work part-time again but tiredness prevented him from being able to resume full-time working so he took early retirement.

His lump was pointed out by a doctor he met at a social gathering.

His lump was pointed out by a doctor he met at a social gathering.

View topic summary
SHOW TEXT VERSION
EMBED CODE
PRINT TRANSCRIPT
I was at a church barbeque in September 1999 and we had some visitors to the barbeque whom I'd never met before. They'd come down to [place name] my town from [place name] Scotland for a day conference and I just happened to be talking to one of them and he said, 'I hope you don't mind me saying this but you've got a lump on your neck just here, and I'm a GP and if I were you I would go and see your own GP.' So I thought, 'Oh I wonder what that is?' And so I wasn't particularly apprehensive when I went to see my GP a few days later. Anyway she had a look at it and gave me a thorough examination. And at the end of it she said, 'All your lymph glands are swollen and I think you must have some serious disease, possibly cancer, and I would like to admit you straight away to the hospital.'

So that was 5 o'clock on the Wednesday, at 6.30 on Wednesday I was admitted to hospital, which was amazingly fast, and in a bit of a state of shock.

And presumably you hadn't noticed the lump on your neck, or if you had you thought nothing of it?

No I hadn't noticed the lump on my neck but I had noticed that the top of my thighs seemed to be a bit swollen and I just thought it was the muscle bulging out, and I didn't realise there were lymph glands down there so I hadn't thought anything of it.

Describes the 'neutropenic diet' that he had to follow for 2 months after having a stem cell...

Describes the 'neutropenic diet' that he had to follow for 2 months after having a stem cell...

And were you still vulnerable to infection when you came home?

Yes I was, and I was on the neutropenic diet for two months.

That sounds like a terrible fag, how did you and your wife cope with that?

Once you got into the routine it was alright but, yes, it was a bit of a bind.

Was in remission and had just returned to full-time work when he developed shingles; the...

Was in remission and had just returned to full-time work when he developed shingles; the...

View topic summary
SHOW TEXT VERSION
EMBED CODE
PRINT TRANSCRIPT
I was off work for eleven months from September '99 to August 2000. In August 2000 I went back to work part-time. My employer was very good and sympathetic to my illness and they allowed me to work part-time and gradually build up to full-time working over a period of, I think it was, eighteen months. Now after about eighteen months, when I'd just got back to work full-time, I got shingles. Now apparently shingles is fairly common with people who've been through the treatment that I have been through, but I wasn't actually warned about this, but in fact the shingles in some ways had a greater effect than the cancer itself because I had got back to full-time working. But with the shingles I'm now, let's have a think, nearly four years on from having shingles, I'm still suffering the after-effects of the shingles, and I've had to take early retirement because I couldn't cope with a full day's work, I really need a rest in the afternoon. But apart from that I'm quite healthy now but shingles did have a significant impact.

The shingles itself didn't seem very bad, I just had a rash across my stomach and I felt very tired for about six weeks or so, and I think I was off work for about two months with the shingles, and I went back part-time again but it soon became clear that I wasn't able to resume full-time working.

You said you're still suffering the after effects, is that tiredness or anything else specific?

Gained peace from his trust in God; he believed that God had a plan and purpose for his life, so...

Gained peace from his trust in God; he believed that God had a plan and purpose for his life, so...

View topic summary
SHOW TEXT VERSION
EMBED CODE
PRINT TRANSCRIPT
I think coming to terms with cancer is one of life's most traumatic experiences, and I just want to share a bit of how I coped personally and how the family coped. Our family are all Christians, we go to a local Baptist church and our faith was a really strong support for us at this time, and the prayers of many people in the church. I found my faith actually strengthened through having the cancer, I found myself having to really trust God as I hadn't had to before when life was comfortable. And I found God to be faithful to me during this time and there were some verses from the bible that really help me that talk about all the things working together for good, for those who love God and that God being a rock of refuge that we can trust in. So through all of this experience I found myself very much kept in peace and there were very few times when I found myself to be unduly anxious, and I attribute this very much to the prayers of the people at church and my family and they were really a great support to me.

I was under no illusions as to what cancer was all about. My brother had been given a terminal diagnosis in February and they told him he had six months to live, and sure enough he lived six months. So I watched him die and yes, so it was, yes, quite traumatic in a way because I know the full effects of cancer. But at the same time I have a faith in God and know that He's got a plan and purpose for my life and so it was a matter of taking each day as it comes really and trusting that things were going to work out, which they have done, so yeah.