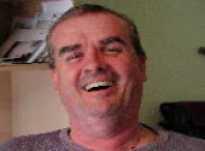 Age at interview: 50
Brief Outline: Brian sustained a traumatic brain injury 17 years ago when he was 33. He has no memory of the injury, but has been told a police officer found him lying injured in the street after being assaulted.
Background: Brian is single, lives alone and has a twenty-three year old daughter. He used to work as a train driver, but now volunteers at a day care centre for disabled people. Ethnic background' White Irish.

<div>After being assaulted, Brian was found lying in the street by a police officer. He had emergency surgery to remove a clot from his brain and spent about six weeks in a coma. His family were initially told that he was not expected to live, but Brian &ldquo;fought back&rdquo; and survived.</div> <div>&nbsp;</div> <div>Following his injury, Brian had to learn to walk and talk again. He can only walk short distances now and mostly uses a wheelchair. Sometimes he is also unable to see objects that are on his right hand side. He describes this as &ldquo;You sort of don&rsquo;t notice some things that you should notice&rdquo;. He thinks this is partly to do with forgetting that they are there.&nbsp;</div> <div>&nbsp;</div> <div>The men who assaulted Brian were convicted and he received compensation, which was organised by his parents and solicitors. His parents managed his finances, until they got older and Brian gave Power of Attorney to the Social Services. This means that financially &ldquo;everything is taken care of&rdquo; for Brian.&nbsp;</div> <div>&nbsp;</div> <div>Since his injury, Brian has had a couple of relationships. He says it&rsquo;s important to &ldquo;make sure you&rsquo;re ready for a romance or a relationship&rdquo;, and wanted to reassure newly injured people that relationships were possible after life-changing injuries.&nbsp;</div> <div>&nbsp;</div> <div>Brian was unable to return to work as a train driver but was &ldquo;over the moon&rdquo; when his former work colleagues bought him an electric wheelchair. He now volunteers at a day centre, supporting other disabled people. Whilst he feels he has changed a lot since his injury, he says his outlook on life now is more positive. He wants other survivors of brain injury to think positive and &ldquo;keep yourself active in your mind&rdquo;.</div> <p>&nbsp;</p>

In Brian’s experience the buses are good, but sometimes mothers don’t want to move their child’s...

Show in context
SHOW TEXT VERSION
PRINT TRANSCRIPT
And tell me about using the bus?
Well the buses now, they’re pretty good. The 311’s pretty good now. Some of the old buses is still in service, but they’re going to be phased out anyway I think. No. Good though.
Some people who I have interviewed have told me that when they tried to get on the bus, it’s very busy and sometimes you know?
Yes, get told you can’t on, because mummy’s got the baby in the, not even the bloody baby, you know what I mean? The kid is sitting in the pram, you know, like a little buggy and he could easily stand up. All the mums have become so lazy now that they don’t want to transfer the children from the buggy and so I mean you have to wait for the next bus. And then when the next bus comes along you hope you can get on that one. Now that’s very contentious issue that is.
What do you think should happen?
Well I think that if there’s a space on the bus that is supposed to be for wheelchair users or buggies, then they should be able to compromise by either the person who’s got the buggy folding the pram up and holding the baby, so that the person in the wheelchair can use the wheelchair space.
And whose responsibility is it? Do you think it’s the mother’s or the driver’s?
It’s the driver’s now. It’s the driver’s now.
And you find that they just don’t do that?

Well sometimes, some don’t. But most of them they comply.

Because his benefits would go further elsewhere, Brian might move from London in the future. He...

Show in context
SHOW TEXT VERSION
PRINT TRANSCRIPT
Because I mean people up in Blackpool, they great. I mean they actually look at you as a normal human being. They don’t sort of like, oh look at him, like you get down in London. People in London they’re too sort of like into themselves basically trying to sort of like survive and that. Whereas in Blackpool and places like that. Easy Street. I mean they get the same benefits that I get, and no... So they get the same money as well. And … their money seems to go a lot further up there than what it does down here.
Yes. Do you find London an expensive place to live?
Well it is yes, it’s becoming very expensive now. But I’ve said to my mum and dad is that I want to do – God forbid my mum and dad pass away, soon or whatever – but not so soon, but in years to come and that, then I’m going to leave London and move out of London, even down on the coast or I’m going to move up to Blackpool.
Why do you want to do that?
Because people up there are more friendly and that. They actually treat you as normal, as a human being, do you know what I mean? I mean it’s a rat run down here, isn’t it?
Tell me a bit more about that, about it being a rat run down here?
Oh bloody hell. It’s sort of like oh I’ve got to here, I’ve got to be there. I’ve got to get this, got to get that, got to do this, got to do that and, you know what I mean? And they’re stressing themselves out so much and, and they don’t, end up having a heart attack or premature death. Do you know what I mean? sad.

After his brain injury, Brian found it difficult to manage his money. He was initially helped by...

Show in context
SHOW TEXT VERSION
PRINT TRANSCRIPT
And apart from the compensation, do you get any other financial benefits?
Oh I get my, I get my Incapacity, my DLA and all of that stuff. DLA, Incapacity, High Rate DLA, High Rate Incapacity, Income Support. And I get a care package.
Okay. Do you know how they’re organised?
Oh that’s done, what I’ve done is given Power of Attorney over my finances. It’s, you know, like the benefits and paying my rent. Because I used to be a bugger, a bugger, I would sort of like get me rent, get me money, and be gone.
So you thought it was as sensible option to let [Borough] control your finances?
Yeah, yeah.
And how did you go about organising that?
Oh well actually I was, my Dad used to manage it before that. He used to manage up until 1998 my Dad was controlling my finances then. Then I had my benefits myself then. I had control of my benefits and all that stuff. I used to be paying my bills. And my Dad’s very, very disciplined, disciplined, you know what I mean?
Previous Page
Next Page