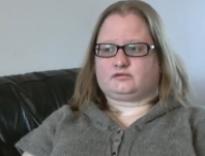 Age at interview: 31
Brief Outline: Rachael was born without a bladder, with a malfunctioning kidney. Doctors created a bladder from part of her bowel. When she was six she was taught to self-catheterise. Despite this she was partially incontinent so when she was 10 she had a Mitrofanoff.
Background: Before Rachael retired due to ill health she worked as an administrator for an insurance company. She is married. Ethnic background/nationality: White British.

Rachael was born without a bladder, and with a malfunctioning kidney. Doctors created a bladder from part of her bowel. When she was six years old she was taught to empty her bladder via her urethra. Despite intermittent self-catheterisation she was often incontinent and had to wear incontinence pads. Her doctors tried to tighten the neck of her bladder but failed, so when Rachael was aged 10 they decided to create a Mitrofanoff, using her appendix and her bowel.  They blocked off her urethra and created a channel from the top of her bladder to a point on the right hand side of her abdomen. Since then Rachael has passed a catheter via this stoma every few hours in order to empty her bladder. This form of intermittent self-catheterisation, via a Mitrofanoff, has been very successful for her.

Rachael is no longer incontinent and says that her quality of life has greatly improved.  She covers her stoma with a light dressing because sometimes it leaks mucous. Rachael takes antibiotics to prevent urinary infections and she takes antispasmodic drugs and pain killers. She has had 21 operations so has adhesions which are very painful at times. Rachael is supposed to have daily bladder washouts because without frequent washouts she has too much mucous in her bladder and sometimes it blocks the Mitrofanoff.

Rachael has found support from family, friends and via a group of other people who have a Mitrofanoff and who communicate via Facebook.  She has also found support from a group called Mitrofanoff Support. She has had excellent care from health professionals over the years but she thinks it is important that doctors and nurses admit to uncertainty because they do not always know what to do when she asks for help.

Rachel has had a Mitrofanoff for nearly 23 years. She explains what it is.

Rachel has had a Mitrofanoff for nearly 23 years. She explains what it is.

View topic summary
SHOW TEXT VERSION
PRINT TRANSCRIPT
Perhaps before we go on any further, would you explain to somebody who doesn’t know, what a Mitrofanoff is exactly?

It’s basically a channel which is commonly now done through the belly button so you can’t actually see it, it’s a stoma. And basically it’s a channel from the bladder to the skin so you can catheterise when you need to go. Some people do have it [the catheter] in long term but it [the Mitrofanoff] is mainly for intermittent self catheterisation which is what I’ve got it for. And I’ve had that nearly 23 years.

How often do you pass a catheter?

You’re meant to go every three to four hours. It depends on your bladder and if you’ve got an augmented bladder, like it’s made out of not just bladder, like mine’s made out of my bowel, you do it, it does depend on how much [urine] you can hold. So I quite often go a lot more than that, but it averages every three to four hours. Some people can go through the night without going. Some people put a bag on so they don’t have to worry about going. I just, if I need to go, I go.

Do you open a valve?

I don’t even have a valve. I literally just get my catheter, get it out, put the green end in through the stoma and the water, the wee just pours out, it’s really, really, simple.
[She shows us the catheter on camera]

View topic summary
SHOW TEXT VERSION
PRINT TRANSCRIPT
Did you want to show us your stoma?

Only if you want to.

Do I need to disconnect you [from the microphone]?

No I can stand up. I apologise for my stomach, I’ll put that there. [Shows the stoma]

Thanks very much. It’s very reassuring to people.

Yes it really doesn’t [show], and these days the Mitrofanoff is done through the belly button when possible, so you can’t, you can see even less than that.

Rachel explains exactly how she drains urine from her bladder through her Mitrofanoff.

Rachel explains exactly how she drains urine from her bladder through her Mitrofanoff.

View topic summary
SHOW TEXT VERSION
PRINT TRANSCRIPT
I get the catheter out and I push it through the stoma, through the hole, and I can feel it hit the bottom of my bladder and the wee drains into the toilet. I wait till its finished draining and then I gradually pull it out because for some reason you get little pockets where it’s still not drained. So I just wait till it’s drained, stop a bit, go a bit more, stop a bit, go a bit more, and take the catheter fully out. Clean it and put it back in a food bag or one of these [bags] and wash my hands and I’m done.

And a new dressing on it?

No, I just use one dressing a day.

Unless it’s really mucousy, if I’ve got a really bad infection, but I just use one dressing a day. I just use Melanin with micropore tape and just stick a dressing over it.

Since Rachel had the Mitrofanoff operation she has been continent which she says is “amazing”.

Since Rachel had the Mitrofanoff operation she has been continent which she says is “amazing”.

View topic summary
SHOW TEXT VERSION
PRINT TRANSCRIPT
So I had my Mitrofanoff created when I was 10. They used my appendix and a bit of my bowel. They blocked my urethra off down below, used my appendix. They took my bowel to make a channel and attached that to the top of my bladder, and I now have a stoma there, and that is where I catheterise through. And so since I had that operation I’ve been continent which is amazing because it was; I’ve got lots wrong with me but of all things if I, the thing that scares me most is being incontinent again.

View topic summary
SHOW TEXT VERSION
PRINT TRANSCRIPT
What’s been the best thing about having a Mitrofanoff as opposed to urethral catheterisation?

No leaking. I’ve had the occasional, I’ve had two occasions where it’s been revised because it was leaking a bit but it, nothing compared to when I was incontinent down below. It’s just, it’s so easy. I can’t, I can’t sort of say how good it is, it’s just changed my life completely.

What about your feelings about yourself as a result of having a catheter?

I think I would have a lot more negative feelings if I was still doing it urethrally. Because I don’t know any different, I’ve never wee’d normally, I don’t know what it’s like to sit and wee, which…. I don’t mind not knowing, I’d be interested to know what it feels like but I don’t know any different from catheterising, and it’s, I feel like it’s part of me really. I don’t feel like, it’s never sort of something that’s got on my nerves. I get a bit annoyed if it’s painful or if I have a bad infection.

Can you say why you think if you had to catheterise urethrally you’d feel worse?

Just because, I suppose feminine, girly wise it’s nearer your girly bits. And it’s just a lot more personal. I don’t, I don’t have to reveal anything doing it like that. I suppose, I mean I coped with it but I didn’t massively enjoy catheterising urethrally when I was little.

Rachel thinks that it is important that health professionals listen to the patient. She says that some health care workers are more willing to learn than others.

Rachel thinks that it is important that health professionals listen to the patient. She says that some health care workers are more willing to learn than others.

View topic summary
SHOW TEXT VERSION
PRINT TRANSCRIPT
What’s important to you as far as, for example, a nurse is concerned, who is dealing with you?

Well unless they’re sort of specialised they don’t always know what to do or how to deal with me. But I just, as long as they’re willing to listen and understand and try, then I’m happy. You know I’m very aware that I might sound like I’m telling them what to do, which I’m not, but I know what works for me and what doesn’t and I’m not a normal [person]; health wise I’m not a normal, I’ve got thirteen things wrong with me. And a lot of them mixed together symptom wise and side effect wise and everything, so what works normally for a lot of people doesn’t, just doesn’t work for me. So I’m very aware that I don’t want to tell them what to do but I do need to sort of reassure them that although what they’re trying to do is helpful it might not work for me.

So for you it’s really important that health professionals listen to you?

Yes listen, just listen, without thinking I’m telling them what to do. ‘Cos I do realise they might think “I’ve been at university for years,” or whatever, and that I’m trying to tell them what to do. But so far everyone’s been really understanding. There’s been a couple of occasions, for example, I have to have bladder washouts and before I met my husband I had a district nurse do it and they’d never known anything like a Mitrofanoff before. And when they’ve done bladder washouts previously they’ve used these little things, about that big [indicates about 2 inches], but I have to use these [shows a large syringe] with like saline, sterile type water. And when they put the water in we have to draw it back rather than just putting the water in, which I don’t believe is done generally, so they’re a bit confused about why and how much I put in obviously ‘cos I do four or five syringes if I can bear the pain if it’s hurting that day. But it’s the only way to get the mucous out if the mucous is particularly bad or if I get a blockage.

So again you’re teaching the district nurses what to do?

Yeah, yeah. And some of them are a bit more willing to learn than others. But I think that’s just, it’s not, I don’t mean that I’m blinding them with science but I think they’re just, just not used to it and it’s a bit of a, not a shock but they don’t know how to deal with it.
Previous Page
Next Page