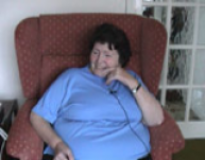 Says she wouldn't like to spend an afternoon talking to other people about motor neurone disease.

Says she wouldn't like to spend an afternoon talking to other people about motor neurone disease.

View topic summary
SHOW TEXT VERSION
PRINT TRANSCRIPT
You were telling me on the phone that you'd been told your illness was terminal. What do you understand by that?

Well, no-one has told me that, but I'm not a complete fool. I know it won't go away. And unfortunately for me, having got a nature that draws on it, the only thing that I wouldn't do is to go to a group where they're all motor neurone.

When I'm in the hospice there is at least one gentleman in the day centre, who has the same. I don't want to speak to him. Not because I don't like him, but [because] I don't want an afternoon with people talking about illness. But there is no other reason.

Thinks euthanasia should be available and the law should be changed.

Thinks euthanasia should be available and the law should be changed.

View topic summary
SHOW TEXT VERSION
PRINT TRANSCRIPT
I said the same when my lovely husband was ill, if I could have given him a tablet I would have done. But that isn't possible.

Because there's been a lot in newspapers and television about this, hasn't it?

Yes. If I thought I would be a total cabbage for years on end, I would sell up and go to Switzerland if I could find someone to take me.

That's what the discussion's been about, hasn't it?

About how when people become so dependent they need help, assistance, don't they?

Yes, more than that, more. I don't see how you should not have assistance. Obviously, if your GP or someone can't do it or wouldn't do it, I respect them but I think somewhere along the line someone should help you. What is the point? What is the point? You're suffering unnecessarily and the cost is... you can end up with the cost... the costs are astronomical and there's no point because there's no end to it.

In some countries, I think it's Scandinavia, it's different, isn't it?

Yes. And Holland there is. My grandson lives in Holland so I know.

Why do you think it's happened in those countries and not in ours?

Because we so drag our feet here, that's why. I mean it's all judgement by people who are able-bodied and they don't have a clue.