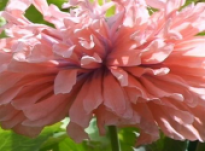 Age at interview: 75
Age at diagnosis: 58
Brief Outline: Olivia was diagnosed with breast cancer 17 years ago, but it doesn't affect her life nowadays. She has moved on from it and doesn't think about it that often.
Background: Olivia is widowed, retired, and has a daughter. Ethnic Background' White British.

Olivia had breast cancer 17 years ago and now feels absolutely fine. In her experience, life just went on afterwards. When she was diagnosed, her daughter had just had a baby and her husband was ill, so she was busy looking after both of them. The most upsetting thing about being diagnosed was that she was too busy, and hadn’t got the time to deal with cancer herself. Since then, cancer has really taken a back seat in her life; having had cancer was incidental; life was important and to be lived.
She took tamoxifen for 5 years, and had regular mammograms at the hospital. 14 lymph glands were removed at the time of her breast surgery and all were clear of cancer. Some time after her initial diagnosis she noticed that parts of her breast were lumpy, and she returned to hospital for a checkup. The lumpiness was caused by scar tissue.
Some of the best advice she received was to get exercise during her radiotherapy course, which she found really helped her fatigue. Taking her horse out riding and getting lots of physical exercise made her feel much less ill at that time.

Olivia had breast cancer 17 years ago. While she identifies with the term ‘cancer survivor’ she...

Olivia had breast cancer 17 years ago. While she identifies with the term ‘cancer survivor’ she...

View topic summary
SHOW TEXT VERSION
EMBED CODE
PRINT TRANSCRIPT
One is, and this is a sort of a policy word. It’s a word used in research but in order to describe the population of people who are living past a cancer diagnosis, people use the term cancer survivor.
Yeah.
What do you think of that term? I mean do you think that that would apply to someone who’s been through something like you have?
Yes, we’ve had cancer but it hasn’t killed us. I mean, you know, you’ve only got to look at the dictionary. That is the word, cancer survivor. Yes, how could anybody object to that, or think it doesn’t say what it, mean what it says.
I think sometimes it a connotation, you know. Some people feel that that defines them and it’s not just, you know, a description but it means something to them, so people club together and say, “We’re cancer survivors. We beat it. We’ve done it”.
No, I don’t have the slightest desire to join a club for which the membership, the essential, I don’t know - I know what I mean but I can’t think of the word; oh, what is the word? - the sort of priority is that you’ve survived cancer. No, I mean I don’t feel a particular affinity with other people who’ve survived cancer, but the fact is to say that somebody is a cancer survivor is true. It’s not all of them. You could describe them as somebody with short legs and red hair and that would be true too. But it is part of, it’s true.
I have no objection to that at all.
Okay.
As long as I don’t have to go to a party where everybody is one.
Fair enough.
And they all want to talk about it.
[laughs]
I think that would be a very dull party.

Olivia doesn’t worry about her breast cancer coming back because she is nearly 76 and knows she...

Olivia doesn’t worry about her breast cancer coming back because she is nearly 76 and knows she...

View topic summary
SHOW TEXT VERSION
EMBED CODE
PRINT TRANSCRIPT
So do you ever think about cancer coming back, or is it anything that you’ve ever thought about?
To me.
Yeah.
No, I mean I’ve got to die of something and I haven’t got the slightest idea what because, you know, God does not send you a first class letter telling you what of and when. And I know perfectly well it could be cancer, people have cancer coming back after twenty-five years, but after all, I’m going to be seventy-six next week. I can’t complain. I mean I was brought up that after you’d achieved three score years and ten the departure lounge was in sight. Don’t you think?
What, that sort of time when you were growing up that was what was expected or?
I don’t know if it was expected but it’s a biblical reference, three score years and ten. That’s considered to be a good age and, if your maths are up to anything, you’ll know that’s seventy. Well I’m seventy-six, so I think I’ve been very lucky.
Previous Page
Next Page