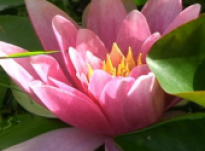 This participant was diagnosed with cervical cancer when she was 36. She experienced bleeding after intercourse, and knew that this was a potential sign of cervical cancer. She always attended her cervical smear screening tests, and had her previous smear test only 18 months before she was diagnosed.
Getting the diagnosis of cervical cancer was very difficult, and she found it hard to take it all in at the time. A friend accompanied her and was able to write down all of the important information, which she felt was very helpful as she wouldn’t have been able to remember it all otherwise. Information leaflets from Cancerbacup were also very informative and straightforward, and helped to answer a lot of her questions about the cancer and its treatment.
She found the radiotherapy planning session difficult, as she was quite uncomfortable and didn’t feel as though the process was explained to her sufficiently. The radiotherapy made her feel quite ill at the time, and she feels that it has affected her in the long-term as she’s ‘not as well as she used to be’ and still has pain in her right hip related to her treatment. Having radiotherapy treatment also brought on an early menopause, for which she took HRT, which was very helpful. She wishes she had known more about the long-term effects of radiotherapy.
She got the ‘all clear’ last year, which she felt was a very nice experience. She still worries about the cancer recurring, and when she gets a headache or pain wonders if it’s a sign that the cancer is back.
Having had cancer has made her think much differently about her long-term plans. She feels that she lives more in the moment and does things that she enjoys without putting them off. Overall she feels that this is a positive change.
Her advice to others is to find out as much information as they can when diagnosed and don’t be afraid to ask lots of questions if you are unsure or frightened.

Since having radiotherapy for cervical cancer she has had frequent ear infections, colds and flu,...

Since having radiotherapy for cervical cancer she has had frequent ear infections, colds and flu,...

View topic summary
SHOW TEXT VERSION
EMBED CODE
PRINT TRANSCRIPT
I had lots of trouble afterwards, I had tons of cystitis. I don't know if I attribute it all to the radiotherapy but I'm not as well as I used to be. [My consultant] said it damages the immune system and I seem to get lots of colds and fluey things that hang around and I'm very different to what I used to. I get very tired still.
I think when I'm well I'm fine, but in this last year I've had, last July I started ear infections, never had them before in my life, and I've never really been clear till about just after Christmas last year. And I've had a really good month and just this week I started another cold again and it's just started to go on my chest. And I bought that stuff today there, some herbal remedy thingy, and I've got Floradix tonic, and that's supposed to be good for the immune system. And I don't know, I suppose I feel, when I feel well it's really great and wonderful, but I'm fed up of always having a cold or having an ear infection or something. And, you know, just to be told it affects your immune system, well fine okay but, you know, I'm five years down the line now, shouldn't it be building up a bit and getting a bit better I feel? And I don't suppose I go to the doctor very often, I don't like to trouble [my GP] but perhaps I should write him a whole list of things and say when is my immune system going to get better then doctor? I don't know, I don't know if doctors have the answers, they can't know anything.

She is afraid that if she tells her doctor about her symptoms they will find her cervical cancer...

She is afraid that if she tells her doctor about her symptoms they will find her cervical cancer...

And you feel comfortable about it not coming back or do you have niggles?

I suppose I feel that's the way I'll die.
Do you?
Mm, sometimes I seem to have a phase, a lot of very, very bad headaches and migraines, and I'll try and talk to [son’s name] sometimes, he's the one that didn't want to know about it, and now with all this sort of toilet trouble I sort of say to him, "I don't know if I'm going to have a brain tumour and die or if I'll have bowel cancer or stomach cancer", but I said, "For goodness sake get them to open my head up and see what's giving me these headaches when I'm gone". He said, "Oh Mum", and he won’t talk to me, he gets cross with me. But I just sometimes need to talk to people about how I feel. I actually want to say, "Look, I feel really poorly and I don't know what's happening", but I'm sure I probably will die of cancer. That's just how I feel. I'm not being maudlin or anything, it's just that I think once you've got it, it's something my Father said years and years ago, you know, he'd watched so many old friends of his die and pop off, and he said something and it always stuck in my mind. He said, "Once you've got it mate you've always got it". And I suppose in the back of my mind I feel that it could easily come back in a different bit of me. And I think that's why I won't go to the doctor now. And I know my husband and all my family would all go, "Oh you've got to go, we don't want to lose you”, and that, but there comes a time you've had enough of pulling about, and I couldn't go through anything like the radiotherapy planning again. And this time, you know, I've got the greatest respect for doctors and nurses, and even if I work in the NHS, I would go leary with them this time if they were horrible to me.
Do you know why I think you should go back is because actually what you're saying doesn't make sense. Because you've had this, you're not going to have another one. I mean I'm not saying you couldn't, but it doesn't mean that you're going to.
It just frightens me what they might find.
Yes, but you might feel better to know that they haven't found anything.
Mm, and oh I don't know it's all very bizarre. I'm sort of muddled about it, I think if I've got it I've got it, it's going to kill me alright, but it's not just a question of going to the doctor and showing the doctor, they want to do things then and send you off for tests and stick tubes in places, no.
I know what you mean, mm.
If it was simply going to the doctor and they said, "Oh here's a tablet or a bottle of cream”, or something, that would be fine, great, brilliant. But, you know, it’s a bit private sometimes, and I know there are people that go to the doctor and start stripping off at the drop of a hat, and things you read about, but not all of us can do that.

She was relieved when she no longer had to go back to the hospital for check-ups after having...

She was relieved when she no longer had to go back to the hospital for check-ups after having...

View topic summary
SHOW TEXT VERSION
EMBED CODE
PRINT TRANSCRIPT
And how soon after that did you get the all clear?
Well only just last year, you have to have five years of going on a yearly return. But they said at the hospital that I was very sensible, I lived near and he knew that if there was a problem I would ring up, which I would. But I found the years went very quickly, and I hate having the internal examination and it seemed like I'd only just been one year and I was, it was January again to go back. And I said to him, oh, I said to my husband, "Ooh I can't go", but I always went.
Did it affect you in terms of, I mean you described the terrible feeling that you might be going to die, that you had originally.
Mm
Did that change over the years before the time when you were told, "No you're really alright"?
No once I'd finished the treatment I think both the doctor, you know, it was sort of joint with [consultant] and [consultant], it was joint care, and they were both very reassuring when I went. And [my GP] was always very supportive. I think once I'd finished the treatment I was alright, that they'd done the best they could. So I felt ,yes, I was alright.
What about when it was coming up to the time when you were having to go back for a check-up?
Oh I hated it. I mean now when I walk in the hospital, I go into the main entrance and I go down by the chapel and go round the corner, oh I dread it, I dread going in there, it brings so many memories back. It brings back so much pain and so much hurt. And, you know, I sit in the waiting room and I have this sort of ten minutes, quarter of an hour with the doctor and then I go. But it just reminds me of how sick and ill I used to feel, and I used to hate going every afternoon, and my waterworks all went wrong and I was forever spending a penny, and all kinds of things like that. I still don't like going in there now. When I go down that bit, I can go and visit anybody else in the hospital apart from going down to that bit, I don't like it.
Previous Page
Next Page