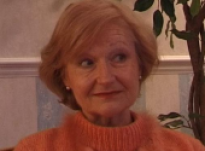 Age at interview: 62
Age at diagnosis: 55
Brief Outline: Diagnosed with non-small cell lung cancer in 1995. Since then has been treated with regular chemotherapy, at least every nine months.
Background: Company director (retired), widow, 2 children.

In the spring of 1995 she developed a cough and eventually decided to see a doctor in November to get some medicine before a holiday in America. The GP recommended that she go for an x-ray before the trip, which showed an abnormality on her lung. She spent the night in hospital and the next day was given a bronchoscopy – a procedure in which a fibre-optic telescope is inserted down the trachea and bronchi to observe the lungs – but there was so much fluid in her lungs that no conclusions could be drawn. The doctors then drained the fluid from the lungs, took a blood sample and did a CT scan. The results revealed an adenocarcinoma between her left lung and her heart. The consultant told her that surgery was too dangerous due to the tumour’s proximity to the heart and that chemotherapy and radiotherapy would not work and she should therefore not try them. He gave her four months to live.
She was very angry with the consultant’s negative attitude and went to see another consultant on the advice of her GP. The consultant told her that they would try chemotherapy but he could make no promises. She immediately liked him and his honest approach. At the time of interview – seven years later – she had had 104 infusions of chemotherapy, had to have a Hickman line fitted (a tube directly inserted into the vena cava (major blood vessel) in the chest) and had lost her hair four times but was still alive and well.
The first infusion of chemotherapy was very successful, she experienced no illness and an x-ray a few weeks later revealed that the cancer had reduced dramatically. She had four or five days in the hospital once a month for four months. As the course progressed she became ill and lost her hair, she enjoyed the novelty of wearing a wig and liked that she didn’t have to wash her hair or visit the hairdressers. To begin with, most friends couldn’t face seeing her because the thought of cancer frightened them, but she received lots of flowers.
When the first four months were over she went to Spain but the coughing started to recur and the area where the tumour was became irritated and began to visibly protrude. She came back to the UK for treatment in the summer of 1996 and for the following two years continued the same treatment. Eventually it became dangerous to use the same chemotherapy so they switched to a different treatment. As soon as the tumour had reduced she headed back to Spain. By the time the cancer began to recur for the third time a new therapy – gemcitabine – was available, which immediately shrank the tumour. At the time of interview she was on a mixture of gemcitabine and carboplatin, which made her very ill.
Since being diagnosed she has bought a run-down house in Spain, which is where she spends most of her time when not receiving treatment. She uses aromatherapy to help her relax but uses no other complementary therapies. Although she would never class herself as a smoker she did occasionally smoke in her teens. She thinks that perhaps the cancer was due to her suffering from pleurisy and pneumonia as a child for which she received a lot of x-rays.

She has so far survived 7 years with lung cancer and has had regular chemotherapy but never...

She has so far survived 7 years with lung cancer and has had regular chemotherapy but never...

View topic summary
SHOW TEXT VERSION
PRINT TRANSCRIPT
But the treatment I'm having now is very mild, although it's taking a long time because I've been having it since the 5th June when they inserted the Hickman line, I've been having chemo on a three weekly cycle. But it's very mild, I don't lose my hair. And one session I have I have a double dose, I call it my double whammy, I am poorly for two or three days, I just hide under the duvet because I'm no use to man or beast then. And then the second one is mild and is no problem to me, and then the third week I have off. You just have to learn to live with it and make the most of the good times when you're feeling well, and that's always been my philosophy. I'm not going to waste my good days by being miserable and worrying about what could happen, will happen. Just get on and enjoy life when you can.
So this mixture of what was it, carboplatin and…?
Gemcitabine.
…you've been having that since last May?
Yes.
And you think this is the end, or will you have another one next month?
This one is the end of the course. I have, as I say, my double whammy, the gemcitabine and carboplatin tomorrow, and then the following Friday the gemcitabine and that is the end of the course. And I have asked my consultant, “Is that the end for a while?” But he's not committed himself, but I just… Seven years on I think he means that, yes, that is the end and we'll leave it be for a while. Because I do feel well and my tumour has shrunk from the naked eye. If you really prod hard you can find it but it's so small it's not worth worrying about, and as you can tell, I'm very strong of voice and I don't cough.
Previous Page
Next Page