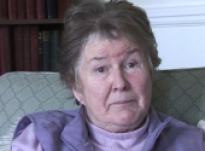 Age at interview: 73
Age at diagnosis: 59
Brief Outline: Elaine was diagnosed with pancreatic cancer in 1995. The surgeon removed most of her pancreas and her spleen. Elaine also had some radiotherapy. Since then she has been very well indeed and only takes metformin for mild diabetes.
Background: Elaine was a doctor before she retired. She is married and has 4 children. Ethnic background/nationality: White Welsh.

In 1995, when Elaine was aged 59, she noticed that on three occasions she had more wind than usual and was burping. She also noticed that when this happened she felt nauseous, and she passed an abnormal putty coloured stool. This happened over a period of about five months.
After Christmas 1995 Elaine went to see her GP, who referred her to a gastroenterologist, who sent her for an ultrasound scan. The scan looked abnormal so Elaine then had a CT scan, which was inconclusive because of technical failure, and an MRI scan. The scans revealed a tumour in the middle of the pancreas, slightly more towards the tail. A week later, on January 19th 1996 Elaine had an operation to remove most of her pancreas and her spleen. She recovered quickly and although she was tired at first she did not feel much pain. She took antibiotics for a while after the surgery because she no longer had a spleen.
Then Elaine had some radiotherapy to discourage any recurrence. She thinks this went on for about three months. She felt a bit nauseated at times but did not want to take any medicines to relieve this side effect.
After the operation the surgeon told Elaine that she probably had about two years to live. She decided that she did not want to be followed up regularly because at that time the radiologist told her that if there was a recurrence there was nothing doctors could do anyway. Elaine had decided that she did not want chemotherapy because results of chemotherapy were not good and she valued quality of life. She decided to live each day to the full as if it were her last day, and even today she believes that that is important.
Now Elaine leads a full and busy life. She does not have any symptoms and feels well. In relation to the pancreatic cancer she only takes metformin, which is a drug for Type 2 diabetes. This may be because the remaining part of her pancreas does not produce enough insulin. Elaine appreciates life and says that in some ways having cancer has had a positive effect on her life. It has made her appreciate every day.
Elaine was interviewed in 2010

Elaine developed diabetes when her body could no longer make insulin to regulate sugar metabolism...

Elaine developed diabetes when her body could no longer make insulin to regulate sugar metabolism...

View topic summary
SHOW TEXT VERSION
PRINT TRANSCRIPT
Today, do you have any symptoms at all as a result of not having a pancreas?
No, I don’t think so, no.
That’s remarkable.
I don’t think so. I think the only thing I’ve had picked up, mainly because they lowered the, the bar, I take a little bit of metformin because my resting, fasting blood sugar went, it used to be, I think the guide was about where I was, but they dropped the bar. So now they’re diagnosing a lot more.
Diabetes?
Type 2. But I, but [my husband] doesn’t xx.
So do you take anything?
Just metformin twice a day.
How do you spell that?
M e t f o r m i n. It’s the sort of starter drug for, but they’ve discharged me for the time being because I don’t think I’m going anywhere.
And can you more or less eat anything?
I’m not very, particularly careful, no. I mean I don’t eat a lot of sugar. I eat a lot of fruit and I eat a lot of, because whatever’s in season I eat probably to excess. If it’s, you know, nectarines, it’s too many nectarines, if it’s grapes, it’s… But, no, I think I just try and lead as normal a life as I, sensibly as I can. And that’s it really.
Previous Page
Next Page