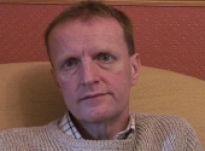 Age at interview: 45
Age at diagnosis: 38
Brief Outline: David first had symptoms in December 2003. He was diagnosed with pancreatic cancer in 2004. He had a Whipple's operation, followed by chemotherapy and radiotherapy. In 2010 his cancer recurred. Doctors have told him that he has 'weeks or months' to live.
Background: David is a Detective Sergeant in the Metropolitan Police. He is married and has three children. Nationality/ethnic Background: White European.

David's advanced pancreatic cancer is causing back pain, which he manages with drugs, hot water...

David's advanced pancreatic cancer is causing back pain, which he manages with drugs, hot water...

View topic summary
HIDE TEXT
PRINT TRANSCRIPT
The pain is in the lower back. Lower back, in the lumbar, is it lumbar part? It’s sort of centred there. And I do, I get, again, working with the Macmillan team, and some drugs there we seem to have, and learning to live with that pain, there’s various techniques that I can do if I use water bottles that aren’t too hot, and literally physically massage my lower back and massage my stomach, using a water bottle, use the pain relief and use oral morph, I can manage that now and get the pain from being chronic down to being reasonable in a short period of time.
And you do the massage yourself or do you get someone else to do it?
I literally, if my wife’s around she’ll help me do it, or I can. It’s quite funny, I can literally do the two together, massaging my stomach and my back, which is quite funny to see really, but I can do that now.
Went back to the doctors last time, which is about two weeks ago, and basically described life expectancy from weeks to months, how long I’ll live.
And again at this point we’re going to go back to the local oncology team to, I think more, I think to hear it in both ears. I think we’ve heard it from one side, the long-term specialist hospital, and I’d like to get the same advice; the view now very much is to put me back on chemotherapy.
So you might start some more?
And that’s been discussed as that it’ll be beneficial to my symptoms. And I can’t see that. I can’t see how going back on chemotherapy at this stage will make my symptoms better. Because I’ll have all the aspects of chemotherapy that I don’t like.
Well we’re trying now to do a referral back to the local oncology team, to hopefully try and meet the same person again. For two reasons' 1, to get a second view of all the information, the blood tumours, the scans etc.; and 2, to see their view on whether chemotherapy at this point would be beneficial.
Again, I’ve spoken with the palliative doctor and there’s - I’ve got to be careful here - that there’s sometimes a view that oncology teams love to give patients chemotherapy because its giving them a treatment.
And giving them, I don’t know, giving them a life line. If I had to vote today, I’m probably going to keep away from chemotherapy. It was sold to me on very much, sold to me that it would help in treatment management. On the advice I’ve taken so far, that doesn’t seem to be fact worthy, or questionable. And I’d rather be happy. And if it meant living another two months on chemotherapy, then I’d rather live two months less but enjoy the benefit of life.

David is terminally ill with pancreatic cancer; he has recently decided to take anti-depressants...

David is terminally ill with pancreatic cancer; he has recently decided to take anti-depressants...

View topic summary
SHOW TEXT VERSION
PRINT TRANSCRIPT
You said that now you’ve reached this stage, of course you feel a bit low at times. How are you managing that with the nurses?
Well, again the sort of, the emotional side has so many, in the last, say, since Christmas, has become a lot more apparent. And I think my wife has sensed that, and it’s been emotional, or there’s been periods where it’s been apparent from the way I’ve spoken.
And again that’s through my wife and through the Macmillan nurse there’s been discussion about how we can manage that. And again when I met the palliative doctor yesterday there was, it was quite a, I mean it was my birthday yesterday, which in potentially your final year is not a joyful occasion. And there was a discussion as to whether I should go on anti-depressant tablets, which for me is just like, seems to be a taboo. I said “Why would I need those?”
But I’ve kind of reflected and it’s been discussed with Macmillan’s nurse prior to this, and it’s been discussed with the specialist hospital. Again I think there’s been a noticed that, I’m a lot, not as strong in character as I’ve been, and then I’ve decided that there does seem to be some more benefit in going on an anti-depressant. On a low level, just to, I think it was described, “Create an even keel”. So to try and manage the highs and the lows, and try and get a more steady path through, which I think makes sense.
Why, why, well I’ll tell you in the future when I’ve taken the tablet, but if it does make a difference and carries me through this stage better then that’s probably an advantage really than just being up and down.

David’s symptoms had been dismissed by his doctors for a year before a recurrence of his...

David’s symptoms had been dismissed by his doctors for a year before a recurrence of his...

View topic summary
SHOW TEXT VERSION
PRINT TRANSCRIPT
December 2006, as I say, for the very first time I can remember driving the car back from the base training, and just felt nauseous, didn’t want my tea. I didn’t want to eat which, again, for a guy that loved food, was out of character.
Went through the trip, came back, I remember had the Christmas, I remember speaking to my wife, saying that things aren’t right here, and I got a little bit upset because, again, I think I felt possibly that there was a reoccurrence of the illness. Straight after Christmas got in contact with the specialist hospital and had an appointment.
They booked a CT scan; the scan didn’t show anything. The blood tumour marker, the 19-9, which is the cancer marker for pancreatic cancer, didn’t show anything.
And then I spent well over a year going back to the hospital saying I don’t feel well. I started to get terrible diarrhoea, at that time it was diarrhoea where very little notice from the feeling of needing to go to the toilet to going to the toilet would be sometimes a minute, two minutes. I couldn’t get to work very well because sometimes I’d need the toilet on the way to work. And then literally I’d have to find different toilets on the way, so that if I did need to go I could divert.
And didn’t, well I wasn’t happy really. Losing weight, every time I went back to the hospital I was losing weight at quite a dramatic rate and saying to the hospital, “There will come a point where I can’t lose much more weight”.
“It will become critical”. Luckily, because I was a big guy, there was quite a bit to go. I mean now I’m nine and a half stone.
Eventually we decided to go private. So I went to the local hospital, back to the original physician that I saw who had given me an indicator of what he thought it was. Saw him. He ran a series of tests and did a CT scan.
And then out of the blue a letter arrived from the oncology unit at the local hospital for an appointment. I went to that appointment, and again, you know when you’re sat in an oncology department waiting to see a doctor that there’s only one thing that they’re going to tell you.
I went to see the doctor, and he said there was a re-occurrence of the disease.
What was your reaction to getting that news?
Relief really, because for a year I’d been sort of saying, “Look, there’s something not right. I’m losing weight, I’ve got nausea, I’ve got diarrhoea”. And again, at one point I even went to my local GP because I didn’t know where to turn to. No-one was sort of, seemed to be listening to me. And my local doctor basically sort of more politely offered me psychiatric care. Is that the right word? Counselling? Holistic, an holistic approach, “Maybe it’s in your mind, and its mind over matter”. And that just, ah, I was, didn’t openly say it but I was absolutely fuming.
Because in my mind I knew it was there, and I think, oh well this is my seventh year, I’m a seven year survivor, and I think one of the reasons why I’ve been here so long as I seem to present symptoms very, very quickly. Like when the original tumour came, it was a very small tumour which blocked the bile duct, which caused the jaundice which then flagged up the tumour.
Previous Page
Next Page