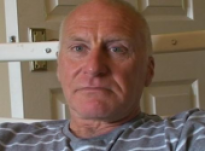 Age at interview: 60
Age at diagnosis: 53
Brief Outline: Alan had bowel cancer in 2003, and received radiotherapy, chemotherapy and surgery. He had to have a hip replacement because his hip was weakened by the radiotherapy. Although he had lots of setbacks, he feels like things are getting back to normal. He does feel more emotional nowadays.
Background: Alan retired in 2001, and is divorced with a son and two daughters. Ethnic Background: White British.

Alan had bowel cancer diagnosed in 2003. In terms of treatment, he received radiotherapy, chemotherapy and surgery. He had terrible side effects from his chemotherapy which was stopped after a week. Alan also had a temporary ileostomy which was inconvenient but he learned to plan his day and what he was doing. He had lots of setbacks around the time of his surgery and had to go back to hospital to have another procedure done. He is keen to have a colonoscopy every 2 years to make sure he is all clear, and thinks that his son should receive regular screening for bowel cancer. Nowadays, he feels completely fine and healthy.
The radiotherapy weakened his hip bone, which resulted in a fractured hip and was another setback. He had to have a hip replacement, and now has one leg slightly longer than the other one.
Generally, he feels much more emotional now, which he thinks is a result of cancer. He also worries about things more, and experiences sleep paralysis and nightmares which his doctor thinks is due to anxiety. He says that he doesn’t feel himself since he had cancer - it’s changed him mentally. He got depressed during his cancer recovery. His doctor prescribed him some antidepressants, but he felt like a zombie while taking them and decided to stop. Alan thinks that being ill was probably the biggest contributor to the downfall of his marriage.
He thinks it would have been nice after he was diagnosed to be able to talk to someone going through bowel cancer who could have explained what was going to happen next, especially in terms of advice about food he could eat or should avoid. He wants to tell people that although it is hard after the surgery to deal with the embarrassing bowel symptoms, it does get better with time and you will get over it. He thinks it is more helpful to get advice from people who have been through the same experience.

Alan’s hip started hurting and an x-ray showed it was fractured, so he had a hip replacement...

Alan’s hip started hurting and an x-ray showed it was fractured, so he had a hip replacement...

View topic summary
SHOW TEXT VERSION
EMBED CODE
PRINT TRANSCRIPT
So yeah, I gradually got better and started to go back to the gym I had, and then my hip started to hurt and I went to the doctor. And initially she said, “Oh, you’ve been overdoing it at the gym, soft tissue.” And it got worse and worse. And I was still married at this point and we went on holiday, only up to the Derbyshire Dales, and I couldn’t walk. I bought a walking stick. Cor, dear me.
Still couldn’t walk about much. Before we came home I had to buy another walking stick, so I was on two sticks and I think I’d been to the doctor before then and he’d given me painkillers. Anyway, I went back to the doctor, we came home, I went back and I said, “There is something wrong. I can feel it grinding.” So he said, “All right. We’ll make an appointment for you to go down to the hospital here to be x-rayed.” So I went down and had an x-ray and I think it was the following day he phoned me up. He said, “There’s a bed waiting for you in the [local hospital].” I said, “What the hell is wrong?” He said, “Your hip is fractured.” And went down there and they initially thought the cancer had recurred and gone into the bone. Fortunately, it hadn’t. And I had to have a complete hip replacement. I can’t remember how long I was in there. Must have been, I don’t know, a week or something. I can’t remember. Whatever, anyway.
And so that was another set-back and you think, “ God, you know, what’s going to happen next?” So I had the hip and the left leg is now that much longer than my right leg and they said did I want an insole and I said, “No, I can’t. I’d feel like a spastic”, you know. I thought, “It’s not me to be like that.” I wish I’d had one because that’s what I’m going to see the doctor for tonight because the hip is playing me up. I think over the years it’s put a lot of pressure on it.
So did they say that the hip problem was directly because of the radiotherapy?
Yeah. Apparently radiotherapy can weaken the bones, and they said that’s what must have happened. They said, “Have you had a fall?” I said, “No, I haven’t had a fall, you know, or anything.” I’d been going to the gym and I can only imagine it weakened it, they think it weakened it, put a hairline crack in it, going to the gym on the treader on the treader and the jarring, because he said to me, “No.” The doctor at the [local hospital], can’t remember his name, I think he was a Scandinavian. He was a nice bloke. He said, “No more running.” He said, “It’s the jarring up the leg all the time, which would do it, so no more running. Swimming, walking, you know, do things.” But yeah, so the hip is there. I can walk or run forward. I’m okay going forward. If I twist about on it plays, you know, but, you know, apart from that I’m good again.

Alan said he had become more emotional since his colorectal cancer. Seven years after his...

Alan said he had become more emotional since his colorectal cancer. Seven years after his...

View topic summary
SHOW TEXT VERSION
EMBED CODE
PRINT TRANSCRIPT
Do you think that the chemotherapy or the surgery left you with any long term effects at all?
Oh, only this emotion thing I think. I know people do get more emotional as they become older but I feel, I know I suppose everybody does, still feel twenty one from the neck up, just that the brain says, “Go”, and the body says, “No”. But so, I never thought I’d become at least as emotional as what I have become, so I would, I could if I had to say anything I’d say, “Yes, I’ve become very emotional since I’ve had it.” One can only, you can’t tell whether I’d become emotional at this age or not if I hadn’t have had cancer but I’m certainly not me. I’m certainly not me and that’s all I can say really. It’s changed me. Not physically, it’s changed me mentally. And but, you know, I’m still breathing.

Alan's son had a rectal examination by his GP following rectal bleeding; Alan wished a more...

Alan's son had a rectal examination by his GP following rectal bleeding; Alan wished a more...

View topic summary
HIDE TEXT
PRINT TRANSCRIPT
Actually, my son has been losing some blood, and I said to him, “Get to the doctor”. And he went to see his doctor, it’s only a couple of weeks ago, this is, and I said, “You want to insist on an examination”. He did internally examine him up there and said there’s nothing wrong. But, can I just go a bit further, I’ve got a niece, sorry, a niece, yes, a niece, she lives in California.
That’s nice.
And she comes in to see her mum, which is my eldest sister, and she was telling her that in America if a member of your family has bowel cancer or any other cancers you automatically get a scan, whether you’ve got the symptoms or not, you have a scan, which I think is good. And I would have liked my son to have had a scan or at least a colonoscopy, you know, so put the camera right into the bowel and have a look, but he didn’t. The doctor did internally examine him and said, “There’s nothing there”, and the symptoms, what you do and what you do and all of that, but of course initially I was asked all that and you say, “No, because I go swimming”. Because he goes swimming and he keeps fit, just like I did, and I think, well, you know, if there is something very small there, like there must have been in me before it grew. So I think that, especially if it’s in the family, if you get any slight symptom, like he’s got, he should have, in my opinion, he should have had at least a colonoscopy.
But he hasn’t, so the only thing I would say to doctors is if somebody comes to you with those symptoms and it’s in the family then I think they should have a proper examination.

Alan says that his colorectal cancer experience is just a page in the book of life; he has turned...

Alan says that his colorectal cancer experience is just a page in the book of life; he has turned...

View topic summary
SHOW TEXT VERSION
EMBED CODE
PRINT TRANSCRIPT
And some people say that how they feel now is bound up really in having been through cancer and things like that. Do you feel that having had cancer defines part of you or…?
What do you…?
Sort of a, you know, having had cancer stays with them a long time and it becomes part of who they are and their identity.
Yeah, I suppose so. I think once you’ve sort of, yeah, you do, you feel it’s part of your life. I think probably it’s the same with a heart attack. You think, you know, “I’ve had a heart attack”. I suppose it’s like what you said, “Does it worry you?” Doesn’t worry you, it’s in the archives. It’s there but it doesn’t worry you, but you think, yeah, God, I’ve had cancer. I’m going to be saying, “Yeah, I had cancer thirty years ago”, but in fact, it will always be there.
Always be there.
I just think it’s like a childhood memory. I was as deaf as a post when I was kid, and it’s always there. I always remember being deaf. So yeah, I think it’s just part of the, just a, life is, honestly, life is an atlas of dreams and you just turn one page and something else happens. It’s like a book. And having cancer is just a page in the book of life. I’ve turned that page over and I’m moving on. I got divorced. I turn another page over, you know, and I think it, but those pages will always be there, so yes, it’s part of your life.
It’s part of your book of life.
Previous Page
Next Page