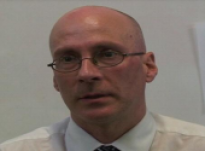 Age at interview: 49
Age at diagnosis: 47
Brief Outline: Mike had recently married and they were trying to start a family, but using donor sperm as he had been left infertile following cancer treatment in his teens.
Background: Mike is a school teacher, married. Ethnic background' White British.

At the age of 15, Mike became aware that he had colitis. He was put on medication but told that if he ever wanted to have children, he should let his doctors know, as he could not have them while on that drug. In his early thirties he developed bowel cancer and had to have an operation and treatment that left him infertile. He had some sperm samples frozen at the time, but he was in his mid-thirties at the time of the operation, and had been on strong medication for almost twenty years. He was in his late 40s when he married a woman 17 years younger than him, and wanted to start a family. They defrosted the sperm, but they were poor quality. So Mike and his wife have decided to try IUI with donor sperm. At the time of the interview, he was waiting for the results of their first cycle. Mike was not bothered about using donor sperm, as he wanted his wife to have a healthy baby and feared that his sperm would be weak and damaged from the strong medicine, even if they had survived the de-frosting.

Mike felt guilty that his wife, who is much younger than him, would like to have a child but he...

Do I feel… yes I do feel guilt. Because there is a large age difference and yes, I did this sort of noble, you know, by the way I can’t have kids, but that was only, you know, when we were quite a couple. But then again it’s not something you are going to broadcast. Hi, I can’t have kids. You know what I mean. So it’s a balance isn’t it? You know, so, I do in that respect yes. It would have been happy for everyone if I’d fallen in love with someone my age, who didn’t want children anyway and that wouldn’t have been an issue, but you know, it just wasn’t to be and I will feel guilty if she doesn’t conceive because I will consider it my fault as such, because, you know what I mean. Your head knows it’s not. I didn’t ask to be ill. But that doesn’t make any difference to a person who wants children, they are going to be upset. And … the more failures you rack up the worst it will be and you know, that’s something that I suppose we will have to see later on. I don’t know. I have no idea how it will pan out.

Mike had had strong drugs and surgery when he was younger for colitis so he was not surprised to...

Show in context
SHOW TEXT VERSION
PRINT TRANSCRIPT
So every now and again periodically I would have a letter from the maternity wing of the hospital and they were saying, “Hey we’ve still got these samples and do you still want to keep them.” And I would always say, “Yes. Why not?” And all that.
So… that continued until I met my future wife, who again is considerably younger than me, by seventeen years, purely co-incidence. And they just then sent a letter then, saying, you know, “We are going to destroy them or do you want us to...” You know, “To, do you want us to… test them?” It was something like that and something made me say, “Oh I’d better get myself checked out.”
So I… I did go, and get myself checked out and… they were very professional, very good, very matter of fact, and they said, “Unfortunately, you know, you are not able to have children. Your sperm just is not there.

Mike recommends not pinning all your hopes on one treatment, but having a backup plan, a Plan B...

Was it hard hearing that news last year...?

It was expected. No because of this back up plan. It would have been very hard if we’d you know, we hadn’t got anything else that would have been, you know, where do you go from there. Deadly silence and then what? So no that was really good. The way that we were presented with options in advance, and if I had to give advice to anybody on whatever on the website and things I would say make sure that you have a plan B. Don’t pin all your hopes on one thing and then say to your partner, oh well we’ll cross that bridge when we come it if it fails. Because you need to consider that, so straight away you have got a fallback position, otherwise your world will just drop out. And it will, you know, it will be an awful feeling and, you know, it will be something that will be terrible for you. So always, there’s usually always something to cling on to, a backup plan or something like that, until right at the end and its gets, by then you will be emotionally worn down anyway and then you’ll will just probably believe it’s all over. It sounds a bit, you know, fatalistic, but do you know what I mean?