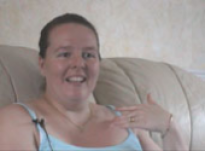 Her second child is autistic and though she feels she should immunise her younger children she...

Show in context
SHOW TEXT VERSION
PRINT TRANSCRIPT
And it's not something, it's not a decision I've made lightly. I haven't sat here and gone, 'Oh, that's it. I'm not having any more'. I have thought it over and thought it over and discussed it with my husband and we've talked and talked and talked and talked. And what do you do? You're just so afraid for your child. That when you're not dealing with, any of the individual illnesses on a day-to-day basis, so really and truly they don't really kind of come into your mind. You're just thinking about what you are dealing with. And when it's not like 'Well, everybody has got polio or everybody has got that and they're really going to catch it' you don't, it's not logical I know on one side of the coin, but the other side of the coin in my head it is. I don't see those illnesses so I'm not having to deal with that. I'm seeing the consequences of the effect of an vaccination, and I see that every day. You know, when you wake up in the morning the full effect of what's happened is there. And when you go to bed at night the full effect is there. And then when he wakes up three, four and five times a night screaming his heart out you, there's no escaping the problems that, you know, have arisen from doing what is deemed as best. So it's, it's really difficult. It's not, I wouldn't wish my worst enemy to be in the position that I have to be in when, when it comes to the children being, having their jabs. It's, it's hard, it really is hard.

She felt too frightened to give her other children MMR because of the reaction her oldest son had.

Show in context
SHOW TEXT VERSION
PRINT TRANSCRIPT
While [my son] had his problems in December of 97, I was actually expecting another baby, who was born in June 98. And that was another little boy. And he had has vaccinations at 2, 3 and 4 months, but he hasn't had the MMR vaccine. I was too afraid. I didn't know if there was something genetically with myself and my husband that made my children more susceptible to an infection triggered by the vaccination or whatever. And to be honest, it wasn't a chance that I could really take. I was half afraid to make that decision just in case I ended up with two children like [my first son], and one child with the problems that, that [my son] has is absolutely enough. It would be very difficult to have two children the same way.

And I personally don't know if it was something in the measles, something in the mumps, something in the rubella, I don't know. It could be one thing in any one of them vaccinations. It could be the fact that they're given as a threesome. I just don't know. So that's what makes me afraid to do it. And because they are live vaccines, would I be opening my children to the risk of something happening by giving them the vaccine? It's just such a hard place to be. I would like someone just to say to me, 'Do you know what? It's all right. You can have them done because I guarantee you they're going to be fine'. But even then I'd probably laugh and think, 'No, I don't think so'.

Now I'd need a cast-iron guarantee written in stone before I'd even venture down that path again. But then obviously as I've said I'm running a risk anyway, because they're, my children aren't vaccinated. So what, what infections am I opening, making them more susceptible to and what are the consequences of those?  But I just don't know. I don't know which way to do it. I mean the amount of times myself and my husband have sat and discussed this, you wouldn't even believe. 'Well, should we or shouldn't we? Should we, shouldn't we? Yes, I will. No, no, I won't'.

She decided not to continue with the immunisation programme after her daughter had a reaction to...

Show in context
SHOW TEXT VERSION
PRINT TRANSCRIPT
My second son had his first, second and third primary jabs. My third son, he had his first and second, and had such a reaction to the second he never had his third. And my little girl, she had her first and hasn't had her second or the third, because she was very, very, very distressed for a good fortnight afterwards. And, it sounds terrible, but the fear of God is in you, when you see your baby come away from the doctor's surgery and to be so distressed. And you're living it on a day-to-day basis. And if it was like a case of she, you know, any of the children came home and they were like cross or, or upset for a couple of hours, but Calpol is working. But when you go into the next day your heart is in your mouth, and when you go into the next day again it, even more so. And then you're just permanently sitting there just waiting, waiting to have to get an ambulance, waiting to have to go to hospital and...

She was just cross and she was miserable and she had swellings on her legs that were absolutely unbelievable. I mean, and upset, didn't want her bottles, didn't want any love, just wasn't consolable. And, and then I suppose you just get to the point where you're like, 'Oh, is this happening all over again? Am I going to have to do this all again? And this is my baby and look what I've done. I've done this because I've allowed her to go there as, as I did with my second or my third son. I've allowed this to happen, you know'. And then sort of you come out the other side. After sort of a week, ten days things are getting a little bit better and then after two weeks everything's back to normal and you're like, 'Thank God'. And then it's like, 'Right, the next one's due' and you're like, 'Oh, God, no, I can't go through that again. I can't do it'. And then obviously I know I'm opening the children to infection. I know, I am a hundred per cent aware of that. But the fear in me that my children are going to have the problems that their oldest brother has got is so overwhelming that I just can't do it.

Her son was agitated and started having petit mal epilepsy after his MMR vaccine and was...

Show in context
HIDE TEXT
PRINT TRANSCRIPT
Basically [my son] went to the doctor's and he had his vaccination. My husband took him. He then came home, was quite agitated, was crying quite a lot, was fairly agitated, was a little bit unresponsive, couldn't be consoled.

So we gave [my son] the medication. It didn't, it sort of controlled his, his agitated state for a short while, but continued to be quite agitated over a couple of weeks. I had taken him back to the doctor's a couple of times because of, well, the way that he was. And they told me that he was, just had a viral infection that couldn't be treated. We approached Christmas, and on Christmas Day [my son] wasn't interested in his presents or any, I mean he was over a year old so he, you know, he did, kind of knew, but he wasn't terribly interested.

On Boxing Day we went in, and we were late waking him up, because [my son] hadn't woken us, and generally [my son] used to, up, you know, wake at half past six, seven o'clock. Half past nine, ten o'clock we wake up and think, 'Oh my Lord, [my son] hasn't woken up yet'. So we've gone into his bedroom and he was in the cot and he appeared as if he'd had a stroke. His face was all drooping on one side and he was dribbling a lot. We took [my son] up to our local hospital and basically sat in A & E for quite a while. But then referred up on to the children's ward. And [my son] continued, he was having episodes where he was just looking straight at us but didn't seem to be aware of what we were doing or even of what he was doing. Now this happened, had happened a number of times up until [my son] had gone to hospital, but I thought it was just, you know what some children are like, they're just like, 'I'm not talking to you. I'm not your friend. Go away, leave me alone'.

[My son] went into the hospital, was up on the children's ward. Basically sort of it got late in to the evening, he hadn't been seen, because there was only skeleton staff on with it obviously being Boxing Day. The, the doctor came in and saw [my son]. [My son] had an episode where he was very, he just flopped back on to the bed, very unresponsive. He was poking, 'Little [name], wake up' and all the rest of it. Called one of the members of staff. She came in, summoned the doctor straight away. And [my son] had actually had a major epileptic fit. But he hadn't had a seizure as such, he'd had an absent fit, which is petit mal epilepsy. They took him into a side room, put a line into his arm to give him intravenous antibiotics. Had a brain scan later that night and it turned out that he had encephalitis, which I believe to be triggered by the vaccine because it was one lead on from one to the other to the other. It was kind of a progressive state.

Describes the health problems her son continued to develop after viral encephalitis was diagnosed...

Show in context
SHOW TEXT VERSION
PRINT TRANSCRIPT
The doctors diagnosed [my son] with viral encephalitis at 13 months. When everything started that's what they said it was. We saw one doctor at our local hospital, who did tell us that she believed it was linked to the MMR vaccine. After he'd had the vaccination all his development stopped. He stopped babbling, virtually the day that he had the jab, because he was so distressed and progressively was distressed between that period and the Christmas period, he wasn't talking, he wasn't responsive, he wasn't like his, babbling his 'Mum, mum' and his 'Dad, dad'. That all stopped. And from that day to this [my son]'s never uttered another word.

So he completely lost his speech?

Lost his speech. And became very uncooperative to say the least. He's now diagnosed with autism, epilepsy, possible Crohn's disease, he hasn't been investigated, that was due to me not taking him to the hospital. Because I thought he's got enough going on in his life with what he has, than to put him through something else. It doesn't really make any difference whether he has or he hasn't. He takes his anti-convulsants on his, a twice daily basis. He has to take laxatives on a daily basis. He takes Paracetamol like it's running out of fashion, just to try and keep him chilled. He's now on Diazepam to try and keep, and he's on an adult's dose, just to try and keep him level. But it's not, it's not really working.