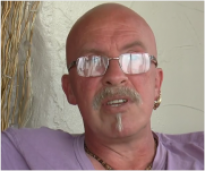 Age at interview: 53
Brief Outline: Tim’s heart failure was caused by a series of heart attacks about 10 years ago. A cardiac arrest also caused brain damage resulting in short term memory loss. He depends on his wife to give him his medicines. He is in constant pain from his spinal injury and two brain tumours but has a positive attitude to life.
Background: Tim used to work as a machine operator but has been retired on medical grounds for about 12 years, not just because of his heart condition, but also because he suffered a spinal injury in an accident. He is married with adult children. Ethnic background: White English.

Tim had his first heart attack ten years ago aged 43 followed by a cardiac arrest while in the ambulance. He had a second heart attack a month later, after which two stents were inserted but a year later one of them collapsed, causing another heart attack. Damage to his heart from the heart attacks has caused heart failure and he cannot do as much physical activity as he used to. He has also suffered damage to his brain from lack of oxygen during the cardiac arrest, resulting in short term memory loss. He doesn’t remember the term ‘heart failure’ being used although it may have been.

Tim has other health problems. Two years before his first heart attack he was injured in a road traffic accident, leaving him with lasting back pain. More recently he has been diagnosed with an acoustic neuroma and a cholesteatoma, affecting his balance and causing facial pain. He is hoping to have an operation for this soon but is waiting for the anaesthetist to confirm he is prepared to give him a general anaesthetic. Tim is prepared to accept the risks associated with a general anaesthetic for someone with heart failure and four years ago had a general anaesthetic for an operation to remove parts of his thyroid gland because of suspected cancer; the tissue removed turned out to be benign.

Tim takes strong painkillers three times a day with meals. He takes bisoprolol, ramipril, aspirin and a statin for his heart condition. Although he was told clopidogrel is not recommended for long term treatment, because his third heart attack occurred after he stopped taking the drug, he is now taking it for life to try to prevent further attacks. He also takes omeprazole to counter the unwanted effects of some of the other drugs. One of the blood pressure medicines caused him erectile dysfunction but his doctors would not prescribe Viagra because it is risky in people with heart conditions; however, he obtained some elsewhere and found it effective. After a couple of years his erections returned so he has no further need for Viagra and has an active sex life. He resents taking so many medicines but accepts that they are keeping him alive. He relies on his wife to give him his pills at the right times since his memory cannot be trusted.

Tim has not seen a heart specialist for about eight years but every three months he is called to an appointment with his GP, who checks his blood pressure and takes blood samples to check his kidney and liver function as both are at risk from his medicines. Sometimes an ECG is also done. Whenever he has felt unwell or concerned about his heart he has phoned the GP and someone has come in about five minutes. He has occasionally called an ambulance, which has arrived in about 20 minutes, which he is very reassured by given that he lives in a very remote location. He always carries a copy of his last ECG printout so that medical staff can see what it was like before. He feels very satisfied with his care because it has kept him alive for ten years so far and his doctors treat him like a human being not a number.

Although he was told to stop smoking after his first heart attack because it would prevent future attacks, Tim took it up again after his second heart attack and continues to smoke today. He uses cannabis to relieve his constant pain. He finds this more effective than the prescribed painkilling medicines, which also tend to make him aggressive. He thinks it unfair that people with multiple sclerosis can have cannabis on prescription but he can’t. He and his wife eat a reasonably healthy diet and lost some weight through Slimming World. He cannot walk without pain or exert himself without becoming tired, so he manages his 8 acre garden with the help of tractors and machinery and has designed it to be as low maintenance as possible.

Tim believes in living as full a life as he can despite his health problems. He doesn’t think about his heart condition except when taking his medicines or attending a check-up. He takes every day as it comes, enjoys life, and doesn’t worry about what the future may hold.

Despite being told the risks of Viagra, Tim had obtained some and used it successfully for a while but then his erections returned naturally.

Despite being told the risks of Viagra, Tim had obtained some and used it successfully for a while but then his erections returned naturally.

And are you still using that?

I haven’t used that for a couple of years now. I think, I think mainly it was, oh let’s say, after your body starts to get used to, after your body starts to get used to being on the blood pressure pills, probably after three or four years, the erections started to come back. You know, my blood pressure hasn’t risen, but the actual erection has started to come back, and I would only use, let’s say, the Viagra recreationally [laughs], I think that’s the polite way of putting it. But yeah, you can have fun with that.

Because of his memory loss Tim relies on his wife to put his medicines out ready in a dosette box and remind him to take them.

Because of his memory loss Tim relies on his wife to put his medicines out ready in a dosette box and remind him to take them.

View topic summary
SHOW TEXT VERSION
EMBED CODE
PRINT TRANSCRIPT
My wife is the dispenser. I haven’t got a clue what I take. I take eight pills in the morning, I take two pills at lunchtime and I take three pills for my tea or at bedtime. What I take I don’t know. Honestly.

Does she ever go away and leave you to your own devices?

No I’ve never been, even if my wife’s been hospitalised, we have one of those trays with seven days of pills, and if I need a lot, but I’ve even taken the bag of pills into the hospital and my wife sorts the pills out in the hospital. So no, we used to have a list, we had a list in the box that kept all the pills, and that had a list of all my pills, when I should be taking them. But the list has disappeared, so I can’t do it anymore. As well as that I’d forget to do it.

So you’re completely dependent on your wife to help with your medication?

Yeah and it’s, it is annoying.

If Tim suspects he is having another heart attack he contacts his GP surgery because it is only 5 minutes away and he gets help more quickly than by phoning for an ambulance.

If Tim suspects he is having another heart attack he contacts his GP surgery because it is only 5 minutes away and he gets help more quickly than by phoning for an ambulance.

View topic summary
SHOW TEXT VERSION
EMBED CODE
PRINT TRANSCRIPT
I’ve never seen a specialist now for, an actual specialist on my heart probably for eight years but I know damn well that if I didn’t feel well, which has happened where I’ve had a little bit of pain down my arm, maybe some pins and needles, and I get a little what I call a niggle in my chest, which I’ve felt unsure about, I’ve gone down to my local GP and within five minutes I’m put to a machine and they check my heart to make sure that I’m not having another heart attack. And I know damn well that I can ring the GP up, which has happened, and they’ll be at my house within five minutes, they strap me up to one of these  machines that gives you a, you know, a jolt

Most of the GPs in this area are first responders and they all, in the cars they carry, I don’t know if is it a defibrillator, it’s one of those machines that gives you a jolt anyway if you’re, and they strap you up to it and then the machine starts talking to you, ‘Please do not touch the patient while I’m arming’, which is a little bit oh [laughter]. But yeah within, within five minutes, I would say, I can have a GP here within general working time, other than that it’s about 20 minutes for an ambulance to get here.
Previous Page
Next Page