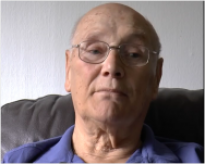 Age at interview: 78
Brief Outline: Ted has a slow and sometimes irregular heartbeat. He takes a variety of medicines to keep a cough, swollen ankles and breathlessness at bay. Arthritis limits the amount of activity he can do. He is monitored monthly by his GP. He also has diabetes and prostate cancer.
Background: Ted is married with an adult son; his daughter died a few years ago. He is a retired motor parts manager. Ethnic background: White English.

Ted’s heart problems were first detected during tests associated with his prostate cancer treatment. He was found to have a slow and sometimes irregular heartbeat. He then developed a cough, swollen ankles and shortness of breath. He was prescribed various medicines. After several adjustments to the dose of the water tablets (diuretics) his cough and breathlessness went away and he is unaware of any symptoms from his slow heartbeat.

Ted is monitored monthly by his GP and is aware that one thing they are checking is a slight problem with his kidney function. He has a blood sample taken before each check-up so the results are ready when he sees the GP. At the check-up the GP measures his weight, pulse and blood pressure, listens to his heart and asks about his symptoms and sleep patterns. Ted also has separate blood tests to measure his clotting time because he takes warfarin; these tests used to be monthly but are currently fortnightly. He also has a monthly injection for his prostate cancer treatment at the GP’s surgery. Ted has a good relationship with his GPs, has confidence in the way they are looking after him and is satisfied with the amount of information they give him about his various conditions.

Ted also has diabetes, which has affected his eyesight and the feeling in his feet. Arthritis limits his mobility and activity levels; he cannot walk far or stand still for long but continues to play indoor bowls at least once a week by having a chair to sit on at each end of the mat. He enjoys pottering in his garden but now needs help with more heavy gardening as if he over exerts himself he is likely to feel faint and has to rest. He uses a four wheeled walking frame outdoors and a stick indoors and has a disabled parking badge for his car. When resting indoors he enjoys reading and watching sport on television.

Ted takes a lot of different medicines to regulate his heart, blood pressure and fluid balance plus a salbutamol inhaler when he is breathless. He also takes medicines for his other health problems. Ted’s wife takes charge of the medication for everyone in the household; she puts their tablets out ready to be taken at certain times of day. Ted accepts that he has to take so many medicines because they are doing him good, but he sometimes forgets to take the statin at night.

Ted is not overweight and other than having cut down on sweet foods because of the diabetes, he eats whatever he likes, including home-grown vegetables and soft fruit that he and his wife pick locally when in season. He feels his diet is reasonably healthy. He gave up alcohol after discovering that it interacted with one of his medicines, causing diarrhoea. He doesn’t smoke. Ted lives for today; he believes in accepting what life throws at him and trying to make the best of it.

Ted’s wife sorts out the whole family’s medicines each day into small glasses; he says could manage on his own if he had to.

Ted’s wife sorts out the whole family’s medicines each day into small glasses; he says could manage on his own if he had to.

View topic summary
SHOW TEXT VERSION
EMBED CODE
PRINT TRANSCRIPT
My wife does, looks after the tablets. I mean I have quite a few. She has quite a few. My son has to have two or three blood pressure ones or something it is. So my wife keeps them in a box and then she, once a day, she puts them into glasses like that, which we have to take, and that’s how we work it. As far as the names go I haven’t got a clue what they’re called. But she’s got a prescription. She’ll show you which, they’ll have all the names on them.

Yeah. So does, is your wife always here or does she ever leave you to your own devices?

She’s nearly always here. If she wants to go anywhere I usually drive her. She can drive but she don’t like driving. She says, “I’m frightened to death of that car.” She says [laughs].

So do you think you could manage your tablets on your own if you had to?

I could if I had to, yes. I mean if I had to I would get a prescription and I mean I would do, I would put them out like my wife does and do them. But it’s easier to take them in one place and for them all to be done in one go. Which is what we do. I mean without my medical assistant there [laughs].

Ted felt that his health professionals must be doing something right because treatment had relieved his breathlessness.

Ted felt that his health professionals must be doing something right because treatment had relieved his breathlessness.

View topic summary
SHOW TEXT VERSION
EMBED CODE
PRINT TRANSCRIPT
Well, I think they’re doing quite well with it. I mean I’m going in once a month and they’re checking on various things. They obviously take a blood test. They must be able to take some from that. They take my blood pressure which, at the moment, is staying right. They check my weight. About once every couple of months they’ll do a check on the chest and my, and the back and everything, you know, sound it.  So yeah, as far as I’m concerned they’re doing what they think is right. I mean, whether it’s right or not I mean I can’t tell. I mean they’ve done, got away with the breathlessness. They’ve made me breathe easier so they must be doing something right.

Ted would be prepared to monitor his weight and blood pressure at home if asked by a professional to do so, but would not want to buy his own equipment.

Ted would be prepared to monitor his weight and blood pressure at home if asked by a professional to do so, but would not want to buy his own equipment.

What about if they asked you to start measuring your weight at home every morning or something?

I’ve got no scales for a start with, so that’s something I couldn’t do [laughs]. I mean, if they said it was necessary, I mean yeah, okay I could do it. I mean it’s not a really big inconvenience but it would mean expense, which, as with I’m retired and on a pension, we don’t really need. But apart from that, yeah, it’s no reason not to do it.

Would you feel the same if they asked you to measure your blood pressure every day, if they gave you a piece of kit to do it?

Well, yeah, I could do that if they did it.

Ted sometimes uses a walking stick and at others a 4-wheeled walker with a seat on it.

Ted sometimes uses a walking stick and at others a 4-wheeled walker with a seat on it.

A wheeler, which is a seater.

There’s a seat on it, four wheels.

I mean I can walk from here round to the shop and back again but I have to sit down for two or three minutes at different times. I mean by the time I get back I mean it’s , I’ve had enough but I can do that if I have to but I do have to rest about three or four times, and I mean it’s not that far away from here.

Then you’ve got a stick you use indoors.

The stick I use indoors and I use, if I’m out I just take the stick with me if I’m not going to do a lot of walking.  Like we went to bowls the other night, well, I only had to walk kind of from here across the road to go into the hall, so I just take my stick with me.

It’s only if I’ve, it’s like when we go fruit picking, I can go, they’ll let me drive down to the beds and then I get the chariot and I walk it down through and then sit on it to pick the fruit because it’s at [company name] and their strawberries are up here on…

They’re grown high. So I can just sit and do that and of course, with cherries on the tree, I can just sit or just lean off the thing and pick them that way.
Previous Page
Next Page