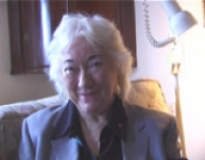 View topic summary
SHOW TEXT VERSION
EMBED CODE
PRINT TRANSCRIPT
I wasn't at all well for a couple of years, sort of getting colds and feeling sort of chesty and I was at boarding school and, you know, not really' nothing happened, you know nobody sort of took much notice. And then we went on holiday with my parents and I started to feel extremely ill, really very ill. And it was at the end of the war and I got a terribly, terribly sore throat.

Anyway, we came home but I had to walk a long way so eventually when I got home the doctor came, I was really quite ill.  And so it was diagnosed as rheumatic fever with all the complications. Which does end up you know, as I learnt, with valvular heart problems. Anyway it took a long time to get over that but I did eventually, of course, sort of live a relatively normal life but I could never run again or do anything like that. But one learned to live with it and I was told never to marry, never to have children. But of course that is a long time ago, in the 1940s. But I didn't do sport or anything which I had loved before. But I managed and then I finally left home and went to live in London, because I lived up in Derbyshire. And lived in London, 'cause I was determined to get away 'cause they were looking after me a bit too much. (I'm cutting out an awful lot...) And so I had a bed-sit and thoroughly enjoyed living in London but you know even then I used to get palpitations sometimes and daren't tell anyone, you know and I daren't tell my parents because they I would have been home straight away.

Anyway, so really from then, things deteriorated slowly. I was told never to have children and I lost 2 full-term babies, actually, but I did manage to have 2 children full-term and we adopted a child. What can I say, you know, life just' when I was busy I was just exhausted' I was exhausted all the time, actually. It was just one life of exhaustion but I was OK.

She describes how wonderful she felt after her mitral valve was replaced.

She describes how wonderful she felt after her mitral valve was replaced.

View topic summary
SHOW TEXT VERSION
EMBED CODE
PRINT TRANSCRIPT
The wonderful specialist at our local hospital was doing the angiogram and he said, 'My God, my God, here we've got some blackmail for the health authorities. You must be in immediately!', and they gave me a mitral valve you know, metal or carbon or something, and when I was even coming out of intensive care, even when I was in intensive care and I was really not compos mentis I just felt wonderful! I cannot tell you. It was like being for years and years and years in a sort of, and I kept having heart failures, all the way along I was having little heart failures but you know, you sort of get used to a situation almost, it sounds stupid, but you do!

And you know, the most wonderful thing in the world is to have a new valve or whatever, I am sure for other people, other things but that is really how it came about and that's 7 years ago. And since then, I mean another one is playing up a bit now but even so, you know, I mean I'm so much better than I was. For the few years before I couldn't drive for three years before, just couldn't, it wouldn't have been safe, you know and all this sort of thing. So really that is the build up and what I have got to now.

Being in a support group helped her because she shared problems with other people.

Being in a support group helped her because she shared problems with other people.

View topic summary
SHOW TEXT VERSION
EMBED CODE
PRINT TRANSCRIPT
Yes, I certainly do recommend the support group. We have an absolutely wonderful one here which started with a few people coming out of rehab, which they have today in a lot of hospitals, (they don't have it in all hospitals I don't think or they certainly didn't), and from that, to get people together with you know, the same sort of problems and you go and talk to people and instead of thinking, 'Gosh I've got this, I've got that', you speak to somebody else and they say, 'So have I', and it lessens it, totally shared. And you sort of think well she or he looks all right and it is an absolutely wonderful thing. And if you sort of mix socially as well, which our support group does, we have a tremendous social activities and combined with, of course exercises, walks and meetings where people talk about medical things, not always by any means. But you know, we get together and we see people, 80 year olds 90 year olds (well she is not quite 90 our oldest one but she's in her mid-eighties absolutely wonderful), whose has had the same problems as people in their 40s who think, 'Golly I won't get there..', but you can. We are all different though. Every single case is totally different. But it is a wonderful thing, support groups I think are essential.