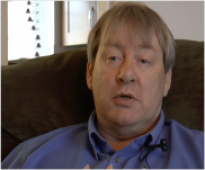 Age at interview: 52
Brief Outline: Philip developed breathlessness and tiredness after having two heart attacks and a cardiac arrest. He takes multiple medicines, has had lots of stents fitted, a defibrillator implanted, and his heart function has been improved by an experimental stem cell treatment.
Background: Philip is married and used to work as a facilities manager but was forced to stop working ten years ago after having a cardiac arrest as he was considered a liability. Ethnic background: White British.

Philip had a heart attack 11 years ago and had a stent put in. Nine months later the stent collapsed causing another heart attack, after which several drug-eluting stents were inserted. He then had a cardiac arrest, after which he had a defibrillator implanted to shock his heart into action if it were to arrest again. Since his cardiac arrest Philip has experienced symptoms of heart failure, such as breathlessness and tiredness. Two years afterwards he had an episode of severe chest pain resulting in more stents being added. Five years ago he took part in a trial that aimed to find out whether injecting stem cells from his bone marrow into the heart could repair the damaged tissues. He has since experienced a ten percent improvement in his heart function and the dose of one of his medicines has been reduced as a result. A year ago his defibrillator was replaced when the batteries were running low.

Philip takes 13 different medicines every day—which his wife organises into a series of containers according to the times of day he should take them—and also has to limit his fluid intake. He was taken off amiodarone some years ago after it damaged his thyroid function. Apart from that, the most significant side effect of the medicines has been erectile dysfunction, for which he has tried all the remedies available to him but without success.

Data from Philip’s defibrillator is downloaded from home once every three months and automatically sent over the internet to the hospital; once a year he goes to the hospital to have it checked there and to see a specialist heart failure nurse. He sees his GP every 3 months and a cardiologist every 6 months. He feels he has a good relationship with the health professionals and is very happy with the way they are looking after him.

Philip blames his heart attacks on work related stress and smoking. He quit smoking after his first heart attack because the consultant said he would not be willing to treat him again in future if he continued to smoke. After the defibrillator was implanted Philip was advised to cut out caffeine from his diet to prevent it from making his heart race. He was forced to give up work after his cardiac arrest as he was considered a liability. Philip attended cardiac rehabilitation sessions after his heart attacks but because his symptoms limit his activity levels he has put on weight and developed back pain. At one time he was being considered for a heart transplant but this was conditional on him reducing his weight to 92 kg, which, so far, he has been unable to do despite modifying his diet. He sleeps propped up on three pillows and wears a mask to keep his airways open because of sleep apnoea.

Philip runs a support group for people with implanted cardiac devices and is an active member of a model railway club. He sometimes feels down about his inability to do all the things he would like to do, but gains comfort from talking about his frustrations with his nurses and fellow support group members.

Philip described all the possible methods he had tried of overcoming erectile dysfunction but nothing proved satisfactory.

Philip described all the possible methods he had tried of overcoming erectile dysfunction but nothing proved satisfactory.

I saw a urologist who prescribed a very, very small pellet that you basically injected in in into the penis but that was very painful, very painful indeed. So we came away from that one. The other option was to have injections directly into the penis but, because I’m on so many blood thinners, I bleed. So you cannot have an injection. Viagra is a no go because Viagra is not good for your heart, even though it was originally been designed for the heart. So the only thing that they’ve come up with is a pump. The problem with the pump is that it causes bruising. Bruising is, obviously, internal bleeding, and you don’t want that. And you’re you’re restricted to the time with the pump to thirty minutes. So you then have to take this device off and then come back to it an hour later. It’s not very pleasant, not very pleasant at all. It takes all the fun out of it, it really does.

So there isn’t any satisfactory alternative?

Philip sees his GP, cardiologist and specialist nurse several times a year each plus having his ICD checked.

Philip sees his GP, cardiologist and specialist nurse several times a year each plus having his ICD checked.

View topic summary
SHOW TEXT VERSION
EMBED CODE
PRINT TRANSCRIPT
So I have to see the professionals. And I’ll see the GP once every three months and she’ll do all the blood tests and things like that. I see a cardiologist every six months. Because I’ve got a defibrillator— an ICD—I download every three months. Now that can be three times a year from home and then once at the hospital, because they always want to see you at the hospital once a year. When I go to the hospital I will see the heart failure nurse as well. So I’m seen nine times a year, just for my heart and my wellbeing to make sure that the drugs are working and that sort of thing.

Philip always sees the same GP about his heart so that the GP gets to know him and his condition and Philip doesn’t have to retell his story to different professionals.

Philip always sees the same GP about his heart so that the GP gets to know him and his condition and Philip doesn’t have to retell his story to different professionals.

View topic summary
SHOW TEXT VERSION
EMBED CODE
PRINT TRANSCRIPT
You’re confident that that that everyone you’re talking to knows your condition. They know you, because you’re only seeing the same people time after time. You’re not seeing different people, so it’s bits and pieces. So you’re very confident, so you’re not stressed out, which a lot of patients do get because they go and see another GP and it’s like, [sighs] ‘Oh it’s a different GP. I’ve got to tell them the same story.’ Before they’ve got in there they’re overly stressed. I see the same GP. I make that a total rule that if I’ve got a problem I will see the same GP for that problem. If I have a different problem, say, a rash on my arm, I’ll go and see one of the other GPs, if they’re available,  because I know it’s got nothing to do with my heart. If it’s got anything to do with my heart I will see the original GP.

Philip’s ICD is downloaded automatically 3 times a year via a machine in his bedroom; he is unaware of it when it happens.

Philip’s ICD is downloaded automatically 3 times a year via a machine in his bedroom; he is unaware of it when it happens.

View topic summary
SHOW TEXT VERSION
EMBED CODE
PRINT TRANSCRIPT
Yes, I, three times a year. They set the date and it’s all wireless, so I don’t have to do the mouse over the shoulder.  It’s a wireless unit that I have underneath the bed upstairs. And whilst I’m asleep it just zaps off to the hospital.  I don’t know what time it happens but it just happens and I get a letter in the post saying everything is fine. I I’m well pleased. Or on the other hand, ‘Oh, we’ve got a problem here and you need to come down and see us’. I did have that happen on the, on the first device, obviously, when the battery was coming to its natural end. So, but then you’re being monitored pretty close to weekly because they want to use as much power as possible but they don’t want to leave it where there’s not enough power. At £20,000 a time these devices are not just handed out like drugs are.
Previous Page
Next Page