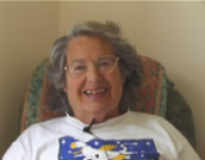 Age at interview: 76
Age at diagnosis: 74
Brief Outline: 2001 started to notice breathlessness. Heart failure may have been diagnosed at one of several hospital appointments.
Background: Retired property owner; widowed with 2 children.

Describes her diagnosis of heart failure.

Describes her diagnosis of heart failure.

View topic summary
SHOW TEXT VERSION
EMBED CODE
PRINT TRANSCRIPT
Well first of all it wasn't a diagnosis, this was from somebody at the hospital, the specialist, he said the wall round my heart was rather thicker than normal and that's why it had to work harder, or something.

Yes, well the diagnosis wasn't the first time, it was probably the next time I went up to the hospital. At one time I went up every couple of months or something, 2 or 3 times in all. But now I just see the doctor.

And what did they explain to you about heart failure?

I don't think they explained a lot, really. I think they talked about a high fibre diet and that was it, really, and you know, take the pills.

Did they explain what it was?

Not in any detail but I just thought to myself, well you know, if you've got heart failure then that's how you'll die one day, the heart will pack up and that will be it. I think my father had 'heart' and I think maybe his father as well. I mean I remember my father, he was watching a snooker match and the boy made, what is it 147? A lot of excitement and it was probably too much for him and he came home and he died, but he was 84. But it was quite a nice way for him to go, in a way. We got a terrible shock but there you are.

Have you been led to expect that it won't improve?

I think somebody did mention that, yes.

At what stage would that have been?

I think it might have been one of the specialists at the hospital. He didn't say very much, just said, you know 'it won't improve' or 'it won't get better' or something like that.

It doesn't sound as if it was a shock to you, though, when you were told?

It was sort of said in a sort of, it just came out in a sort of off-hand way, you know. I didn't take too much notice of it, really. That was it.