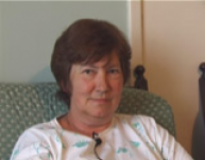 She thinks her heart failure may have been caused by a virus or her genetic inheritance.

She thinks her heart failure may have been caused by a virus or her genetic inheritance.

View topic summary
SHOW TEXT VERSION
EMBED CODE
PRINT TRANSCRIPT
They said I'd had a virus and that the virus had affected my heart, had damaged one side of my heart. But they didn't necessarily say that the virus was sort of in the last couple of weeks even. It could have been earlier than that but they weren't really sure when it was. Now I had had a very bad 'flu, that was the Easter, I had had a very, very bad 'flu about Christmas so whether that was it I don't know.

What do you think?

I honestly don't know, I really don't know. The only thing I can say is my mother had the same thing when she was quite young, 9 years old actually, and that was after a 'flu - and I don't know the extent of the damage but she always took tablets for the rest of her life. After saying that, she led a normal life but I always remember her saying that she had a heart problem after having 'flu when she was 9 years old. So perhaps it's a weakness in our family. And perhaps it misses a few, I don't know, I don't know.

She thought her breathlessness was a chest infection at first.

She thought her breathlessness was a chest infection at first.

View topic summary
SHOW TEXT VERSION
EMBED CODE
PRINT TRANSCRIPT
Well it felt as if I had a chest infection so I had gone to the doctor, but they couldn't hear anything on my chest at all so I was told to go away and see if it got better, really, come back if it didn't. And so it didn't really get better so I went back again but they couldn't hear anything again on my chest at all. I was getting puffed out walking to the car from the supermarket, I was getting puffed out walking up the stairs but not too much at that time. So still couldn't hear anything on my chest so I thought oh well, it's bound to go away. Then one night I started getting really out of breath and sort of gasping for breath and it got worse really. Eventually it went away again, but I went to the doctor's, and it was another doctor I saw and they gave me an ECG, and they found through taking my pulse, that there was a slight irregularity there. So they had something to go on with the ECG if it happened again, if anything happened and they told me to come back in 2 days. I think they were thinking about giving me some tablets but also at the time they thought it might be something to do with stress because I suppose it really sounded a bit like a panic attack. The way that I was describing that I was breathing and then it went away.

She looks at life differently since having heart problems.

She looks at life differently since having heart problems.

View topic summary
SHOW TEXT VERSION
EMBED CODE
PRINT TRANSCRIPT
I think it can make you more aware of life and how fragile it is. The fact that you could one day that you're fine and you're at work or out somewhere and then the next day, basically you're nearly dying. And you don't know whether or not you're going to recover.  It can make a difference that way and you do look at life a different way. And you can get a little bit upset over certain things that you see on the television or that's happened to other people, definitely. And you think more about it then than you would have thought before it happened to you. So it can't be a bad thing really.

It's almost as if it sort of sensitises you?

Yes, definitely. It can't be a bad thing to think more like that so no, it is quite a shock and I think it does make you think more, definitely, yes.

She did a steep walk in the Lake District even though she was breathless.

She did a steep walk in the Lake District even though she was breathless.

View topic summary
SHOW TEXT VERSION
EMBED CODE
PRINT TRANSCRIPT
Well I was quite shocked really. It is quite a shock. But apart from that, you've just got to learn to cope with it really. There's nothing you can do about it so... you either become an invalid and think of all the things you can't do, or you get on with your life and think of the things that you can do. And try to do the things that you did before, even if it's just that little bit slower, which I did! [laughs]

There's quite a good walk around here, in the Lake District and it's quite steep but it's quite short as well, and I used to like to do that walk. So one day last year I decided I felt alright so I went with a bottle of water, and I was also puffing and blowing, and I don't think I would have taken any friends with me because they'd probably have been a bit frightened! But I just stopped when I wanted to stop and I took a bottle of water, and I did that walk!  I was determined that I was going to get to the top, and I did and it was fine.  It just took a little bit longer than normal, and a little bit more puffing and blowing than it normally would have done but I got there [smiles].

Advises people to get on with life and do what they want to.

Advises people to get on with life and do what they want to.