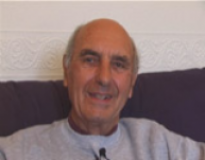 Age at interview: 72
Brief Outline: Interview with a carer who is married to woman who has had heart problems for several years.
Background: Retired engineer; married with 2 children.

Talks about his need for more back-up support at home to help him and his wife cope with her...

Talks about his need for more back-up support at home to help him and his wife cope with her...

View topic summary
SHOW TEXT VERSION
EMBED CODE
PRINT TRANSCRIPT
Brought her home with a letter to take to the doctor, which is usual procedure - I took that into the doctor the next day expecting the doctor to come round and see us - nothing happened, and she was still quite poorly at this stage, I know she'd come out of hospital but she was still quite poorly, she couldn't get upstairs or do things like that you know, in a lot of pain.

So I called the doctor out eventually - I would have thought that the doctor would have come on his own volition knowing that that - but he didn't, eventually the doctor came, not our own doctor but a doctor came out, and he looked at the notes and the letter and he said, 'Well I can't do anything for you, you'll have to wait till you go to hospital to see the cardiologist in hospital.'

All the way through this procedure nobody had ever come to me, apart from the children, obviously and friends, nobody in the hospital or anywhere like that except for one sister and the nurses, ever came to me and spoke to me about it, 'How are you coping? How are you getting on?' Nobody offered any sort of back-up or any sort of help to get you through it, you know, they just accepted that you were somebody who just came to see as a visitor you know, well here she is you know. Nobody ever said, except for one night, the night sister came up to me and sat down by the side of me, and she talked for about half an hour I should think, telling me all the things that they'd done, and what they hadn't done, and what could happen and what couldn't happen, and that was the first time I had had anybody talk to me, so you do feel a bit alone.

Anyway we got home and eventually we went to the hospital, after..the appointment must have been a fortnight after she came home so we were really in no-mans-land during that period! You're here, you've got a patient with you, your wife, whose been seriously ill, and there is nobody there to back you up, there's nobody there even to give you a phone call and say, 'Look is it alright? Is there anything we can do?', you know, 'Have you got this? Have you done that?' Nothing! Until we actually got to the hospital, and then the cardiologist there at the local hospital took on the case and she's still now, to this day, on a very closely balanced set of drugs as you probably already know, and those, she has blood tests every... month and her blood count is watched very closely every month. And slowly but surely, there is a slight deterioration, and it's the drugs that are causing it and they can't take her off the drugs because her heart won't stand it. So that's really where we are at the moment.

I think once, there should be some form of system laid down whereby when somebody's been seriously ill in hospital and they come out and they're at home for the first day, that there should be somebody almost there to meet them to talk through what's happened, talk through what you've got to do, to get you through those first few days, because don't forget you've got to get wound up to what's going on as well. You need somebody there almost on a daily basis for the first few days, to talk you through. Just calling in, just to see if everything's okay. That I think is one of the most important things but it needs to be somebody who understands what's gone on, and the severity in this case of what had gone on. That I think is the most important thing. Then as you say - which is happening now in the 'Hale & Hearties' - somewhere where you can phone.  Somewhere where you can talk to somebody who knows and understands... even to say, 'Okay, under those circumstances you better bring her in straightaway'.

He worries about leaving his wife on her own and thinks more psychological back-up would help...

He worries about leaving his wife on her own and thinks more psychological back-up would help...

View topic summary
SHOW TEXT VERSION
EMBED CODE
PRINT TRANSCRIPT
We then had to consider what we could do. She couldn't go walking anymore with the dogs, we had two dogs at the time. She couldn't go walking anymore, so this in itself built up a frustration in her, and lot of frustration in me and a bit of a concern of how it was going to affect her. The first things also when you're first brought out of hospital was taking the dogs for a walk - I was always concerned about going out of the house and leaving her - you never, you never quite knew whether you were going to come back to her being alive, being walking about or being collapsed in a big heap somewhere. And that in fact still happens today I mean even, today I'll wake up in the middle of the night to see if she's still breathing, which is silly. It's peculiar really but the fact it happens, it crosses your mind!

At times you think well I need some psychological back-up here to, I feel sorry for people that, if you like, aren't classed as laid-back, classed you know, okay if I can do something about I'll do it, if I can't, then don't worry about it because there is no good worrying about it, but even so I think that somebody who isn't, they'd be absolutely in a terrible mess, going through the situation that we went through. It would be, it would have been nice right from the onset for somebody that you could have spoken to. A number that you could have phoned up and said I've got this problem now, how can I handle this? Whatever it was, it could be health problem it could be a psychological problem, somebody you could talk to who knows what's going on and could tell you and guide you and say, 'Yes, well I know, yes we've met with this situation before and this is what you must do'.

He needs to get out and meet other people but his wife can no longer lead that kind of life.

He needs to get out and meet other people but his wife can no longer lead that kind of life.

View topic summary
SHOW TEXT VERSION
EMBED CODE
PRINT TRANSCRIPT
I wouldn't say it's changed a great deal because we've always been a very close couple, we've always done things together, but of course that has meant that we've always taken the dogs a walk, we've always gone on holiday together, always been country holidays in the main, although we've been abroad quite a lot which she can't do anymore. So we've always done a lot together. So we're only not together in the things that we used to do together like taking the dog a walk - I take the dog a walk now on my own - but the problem with that is that I have a whole host of friends that I meet every morning - different people, different people with dogs - across the fields, chat to them, talk to them. I've met a lot of people and I come back, if you like my daily chat has been fulfilled. Now that of course is what she hasn't got anymore. When she used to come with me then she would be involved in that daily chat but that doesn't happen anymore so... it's affected us in that way in so much that you don't meet people, and the one thing I have to do is meet people.

All our lives we have been close together because we used to do a lot of dingy sailing, in fact all the family had boats and we used to race all over the country, and if you like my wife was our team manager so it's not up until, that was only a few years ago that I packed up. She was our team manager and that was it you know, you were with a whole crowd of people but when I stopped sailing of course all those people went as well, and that's when I joined the drama group because I said, I've got to meet somebody, I've got to be with somebody, be involved with somebody, doing something. And that's what I did. I marched down to the local village hall one day to the drama group meeting and I said I'm here! But [wife] couldn't do that you see.

She has joined a local woman's sort of club which meets once a month but that's only a low-profile thing you know, they don't seem to do anything but just talk but that's good, that's good and she's done that. But apart from the garden which is always here now she hasn't got anywhere to go out and meet people, so we've got this divide, where I can go out and meet different people every day and see what's going on in the world, and she will stay here till I come back, so the only time we go out, is if we go out to a nursery or something like that so we don't meet many people not people we know.