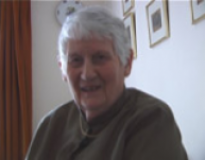 Age at interview: 76
Brief Outline: Interview with a carer married to a man who developed heart failure in the late 1990s after several heart attacks.
Background: Wife and mother; married with 3 children.

Her husband has become more passive than before he had heart failure.

Show in context
SHOW TEXT VERSION
PRINT TRANSCRIPT
Well let's put it like this he'd always been.. he'd joined Rotary because of the service and he enjoyed being on committees, and once he retired, well I saw more of him I think when he was at work than when he retired because if he wasn't actually working in the garden, he was off on all sorts of committees. I don't know he must've been on what - a dozen committees I should think - and actively involved in all of them. He did all the garden himself you know, he enjoyed doing that, and we had a dog then and he used to take the dog for a walk night and morning.

And can you describe him now?

It is difficult, he doesn't seem to want to do a lot. He's still on a couple of committees [pause] the Millstream here in the village which is, there's a day centre, well it's a day centre committee, he's come off the Millstream committee which is the housing but he's on the day centre committee, he represents the Evergreens on that. And as well another committee he's on in the village which is a charity thing connected with the church. But that's about all, and he just doesn't seem to do a lot these days, you know, I think of things to get him up and out you know [laughs] but he's, he just seems to lie back lot.  He reads the papers from cover to cover, looks at the odd crossword puzzle but he has very little to say at all. If there's, if we've got friends here he likes to be here, but he doesn't do much talking at all. I don't know, I don't know whether its age or whether its all to do with you know with the heart problems that he's had and the diabetes or what it is, I just can't make out. But he's certainly not the same man as he used to be.

She cannot understand why her husband never worries anymore, even about important things.

Show in context
SHOW TEXT VERSION
PRINT TRANSCRIPT
But can you share your fears with him or talk to him about things?

Oh he just tells me I'm daft, to stop worrying [laughs] - "I'm alright," he says "there's nothing to worry about." This is [name], he won't talk about the fears, and it's the same I try to talk to him about what we should do you know and..."we can't you know keep on like this when you can't cope with me during the day, what are we going to do?" And he says, "Well we'll get a couple of the helpers, they'll have to come in more often," and I said, "Well when you pass on, into a home, we ought to have some ideas." He said, "Oh you'll manage, you'll manage." You know I said to him, "Well if I have to... if I die early, what are you going to do?" "Oh," he said, "I'll be alright, I'll find... I'll either stay here or I'll go into a home," he said, "I know the family can't do it, [name] is in Italy and [names] with the triplets there's no way they could cope with me and," he said, "I don't think I could stand living with them all the time. I love them coming for the day but," he said "I don't think I could stand actually living with them even if it was possible."

I think it is more on me than him because he honestly, I'm being quite honest, he doesn't worry at all about it. And he doesn't worry about other things very much at all you know. If friends are ill, a friend, my great friend who normally comes on a Monday when [name] is at Rotary who lives in the village she was in a nasty car accident a  month ago, this Wednesday. I've been worried sick about her and her granddaughter who was seriously ill after it, she's still under sedation after the operation on the following Sunday, but he doesn't seem to be bothered a bit.