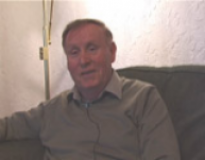 Received his diagnosis of heart failure from a GP in his practice.

Received his diagnosis of heart failure from a GP in his practice.

View topic summary
SHOW TEXT VERSION
EMBED CODE
PRINT TRANSCRIPT
The GP yeah well what he did, he gave me a sounding on the chest you know usual stethoscope job, checked my blood pressure which is normal, and all that, and he started, I told him the symptoms of what I was having, that's how he set me off on, initially he set me off on a beta blocker, no another type ace inhibitor but it gave me an awful cough. And also so, that particular GP he referred me to another GP in the practice who was more, who does a lot of heart work at the hospital. Well I say a lot, he does a clinic there, and he started'

I had that echo cardiograph and he diagnosed heart failure. He told me there and then, the same day and then he [treated] me from there on you know with, it took him six months to build me up to this level of medication because he increased the beta blocker at a slow rate, he didn't give them your full 10mg of it, he started off at 2mg and slowly built it up over a few weeks and weeks and that's, until what I'm on now. And I feel not bad at all really you know.

How smoking and working shifts affected his heart.

How smoking and working shifts affected his heart.

View topic summary
SHOW TEXT VERSION
EMBED CODE
PRINT TRANSCRIPT
Well it's very difficult. I did smoke at the time, I did smoke which I don't now, I did smoke and I think shift work and stress sometimes can bring a lot of it on. I think stress more than anything, more than probably the smoking. I know they all decry the smoking, but I think the shift work didn't do any good for me at all, I think I shouldn't have been in that type of work.

No it was indoor work. Yes we worked, it was all machinery, we were manufacturing components for engines so it was all indoor work yes. Under artificial light I might add, no windows, and you know you didn't know night from day all the time. And we were, it was years ago, it was quite dusty as well, you know with the cast iron being machined and stuff like that. Later years they got extractors fitted and thing's like that, it was a lot better you know. But I think a lot of the stress and shift work and working upside down you know, that creates it.

So no smoking I don't smoke as well. I used to smoke years ago, oh I used to smoke. I don't know people keep saying how many did you smoke and I say well I can't remember, maybe it could be 20, 25... I don't know really I forgot. I packed smoking cigarettes up in '76, I did smoke a pipe after that and cigars you know so I don't know. And then I got, stopped the pipe a number of years ago and I packed up the, well I packed up the pipe when I had the triple heart by-pass to be quite fair and I never had any, I've had the odd one since but that's it you know. Well one or two maybe I don't know, I mean I can't be absolutely sure no. But I don't smoke now, I don't use them.  Yeah.

He can feel breathless if he tries to do something too quickly.

He can feel breathless if he tries to do something too quickly.

Well when you feel breathless its like... walking up hill, and when I feel you know walking up, or running up and downstairs we'll say, and I feel breathless, I don't run up and down stairs but if that's what it feels like I've run up and down stairs you know, up and down a few times you now puffing hard you know. You know you're gasping for air a bit more. But it's a lot better now that I'm on the medication, I don't get so much breathlessness, only if I approach a bank or I do something rather quicker than I should have done like go upstairs faster than I should, then I might feel a little bit breathless you know. But other than that it hasn't affected me too badly now. It did initially before I had the medication I felt I was, I was puffing walking on level ground you know I was out of breath then so that's how it felt.

Would like another test to find out if his enlarged heart has returned to its normal size.

Would like another test to find out if his enlarged heart has returned to its normal size.

View topic summary
SHOW TEXT VERSION
EMBED CODE
PRINT TRANSCRIPT
But no, if you've got it you can only live with it, you can't do anything about it. You know it's something you can't just, in fact mind you some of these medicines though they do, they do... put a regression on the heart, like the heart will go back to its normal size. Normally with heart failure it's your heart enlargement and then it does regress the heart a bit some of these tablets like you know sort of brings it back down to a normal size so I'm hoping mine has gone back down to its proper size. I asked the doctor if he could do another echo cardiograph on it so that he could find out like but he said, 'We don't normally do that!'. But I don't know why, I'd like to know though you know. If you could, I mean if he'd follow it up himself, yeah we'll check it and see if it has gone back down and I'd be quite happy then, I'd know I'm making progress you know. So I don't know. You see I don't now at the moment whether I'm... I feel alright but I don't know whether it's getting, my heart is getting worse or it's getting better. I feel okay, so I assume it's getting better you know. In fact I feel brilliant sometimes I really do.

The triple combination of drugs has made him feel much better.

The triple combination of drugs has made him feel much better.

View topic summary
SHOW TEXT VERSION
EMBED CODE
PRINT TRANSCRIPT
And then I've been alright for the last nine years up till a year gone... a year gone January, when they diagnosed heart failure which I had an echocardiograph and they diagnosed heart failure from there. And I've just progressed from there with my tablets which the doctor put me on, different medication of course. He started me off with frusemide, water tables, and then we progressed onto beta-blockers and also another one called an ace inhibitor (you've heard of it), ACE inhibitor, and of course I take an aspirin you know. So that's about where I am. It's taken me a year to sort of feel better, it's taken me a year. Initially when I first, before they started treating me for this condition, I was feeling tired, I was worn out, and I was out of breath a lot you know. And especially when I laid in bed, you know water, I was filling with water. And since they've [treated] me I've started getting a bit of strength back now, you know I'm alright, I'm a lot better than I was. I thought, in fact I thought I was finished, I thought I was going to die, 'cause I felt that ill.

View topic summary
SHOW TEXT VERSION
EMBED CODE
PRINT TRANSCRIPT
No I've always taken the medication the doctor has prescribed. I've tried it,I mean I had, initially he did us give us a tablet called ramipril and that one gave me an awful cough so he changed that you know, because I read up on these particular ones which some do you give a cough, a side effect of a cough which was pretty awful coughing all night long in bed and that all, my wife will tell you that, cough, cough, cough. So he changed that, and then he, there is certain ones that will give you that type of side effect so they have to adjust them like. No, mostly all the tablets or medication he's given me, the doctor, I try it yes certainly but if it doesn't work right I tell him [laughs].

View topic summary
SHOW TEXT VERSION
EMBED CODE
PRINT TRANSCRIPT
Well my, well I've seen him quite a few times because he was building me up. The doctor, I've been to see him quite a number of times because he built me up on the tablets. But the last time I seen him it was six months ago, almost six months because he said leave it six month and come and see me, which I'm going to do, shortly you know. Oh but I have seen the nurse, the nurse, the nurse there also had like they check up on the heart, I was there last week in fact and they do, check my blood pressure and oh they took blood samples because these, they took blood samples and a water, a sample of water. And they have to check up, apparently you can get liver trouble with some of these tables or kidney problems and that, so they have to keep a tight check on them you now. I have to go back in six months time in fact so that's it you know.

Describes how he feels when he's having a bad day.

Describes how he feels when he's having a bad day.

View topic summary
SHOW TEXT VERSION
EMBED CODE
PRINT TRANSCRIPT
Well I feel pretty good, in fact some days I'm not so good. I have days when I feel wrong and I don't always feel right. You have these days when you don't always feel one hundred percent and for what reason I don't know, whether I've been doing something, too much previous like too much walking about, or doing something I shouldn't be doing and it's caught up with me, I think sometimes there's a little bit of that.