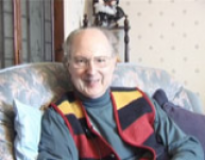 He was given inadequate information because of the poor hand over between two nurses.

He was given inadequate information because of the poor hand over between two nurses.

Another thing that upset me at the time; you're allocated a nurse when you first get in to the unit. Now then, that nurse after two or three days, her father was taken seriously ill, so she was stood down. Allocated another nurse. So one nurse didn't know what the other one had told me and now I know I should have asked questions but you're not, you withdraw in to yourself. You're angry at being there.

That was unfortunate, it shouldn't have happened but it did. My nurse, probably feeling, 'oh he's got a couple of days yet before he goes out, so I can brief him on everything.' Her father was taken ill, she was taken off my case and in fact she went home on holiday on leave.

Her colleague was given my case and I presumed she must have told her everything and it was only when this colleague was in the next bed telling the new patient what was going to happen, I thought, 'I don't know anything about this'. So I asked her, 'talk to me please.'

He felt he shouldn't be the one having a heart attack, but felt better when someone even younger...

He felt he shouldn't be the one having a heart attack, but felt better when someone even younger...

View topic summary
SHOW TEXT VERSION
PRINT TRANSCRIPT
So next morning when my wife phoned up the ward I was in, 'oh no, no, he's been moved. He's in the cardiology unit.' Panic stations and I must admit, I felt depressed when I found out I'd had a heart attack. 'Why me?' All my life I'd been working on my feet and I thought I was fit. I thought, 'Why me?

There's other people who sit down at desks, you know bigger than me, so 'Why me?' and I was angry as well, it's hard to explain. You don't think you've survived and thank god you have, but it was a couple of days later when somebody else came in to the hospital who was younger than me, because everyone else in this ward was older and I was the youngest, and when this person came in who was younger than me, I felt a lot better. It's a terrible thing to say now, but I did.

His heart attack ten years ago with no complications since, has not prevented him from going on...

His heart attack ten years ago with no complications since, has not prevented him from going on...

So this time it's a holiday for us; about ten islands in about fourteen days round the Caribbean and every other day, we're snorkelling. Not bothered about seeing the sites of plantations and that, we've done all that. Get me in the water, the snorkelling. I can't dive because of my asthma but I'd love to, so I can snorkel.

You can do anything you want if you're fit enough and you don't have complications after a heart attack. I pity the people who do have complications and I come across an awful lot of them as Chairman and I sympathise with them. But even they can get over it and a lot have.