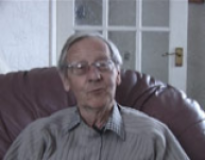 He didn't find it difficult to accept that he'd had a heart attack and was grateful that...

He didn't find it difficult to accept that he'd had a heart attack and was grateful that...

View topic summary
SHOW TEXT VERSION
PRINT TRANSCRIPT
I accept things. I was able to accept it no trouble. I've never had any problem. I'm not one of these people who think, 'Why me?' or  'Why should I be in this situation?' I'm just grateful that the facilities were there to rectify what I had.

I had no thoughts or feelings really about it at all, which is surprising because I wasn't, no one is prepared for it. We all react different ways. My way was I've had a heart attack, I've got a problem with my heart, these people are going to rectify it, which they did and I'll be eternally grateful.

He was terrified before bypass surgery but other patients on the ward helped to calm his fears.

He was terrified before bypass surgery but other patients on the ward helped to calm his fears.

View topic summary
SHOW TEXT VERSION
PRINT TRANSCRIPT
The unknown, the thought of having your chest sliced open, your ribs cut open and your ribs expanded, your heart being handled, being on a life support machine and there's always a chance even with the best surgeons in the world that you may not come out of it. That really frightened me. Not the thought of coming out of it because I knew if I didn't come out of it, I knew nothing about it.

I was literally shaking, my nerves did get the better of me all of the time, whilst I was in. I did calm down, it was rather funny at the time. They transferred me in to a side ward with three young lads in because they thought I would cheer them up. I think the reverse happened, but it was great. There was a 14 year old with a lung problem who eventually had to get it cut out.

There was another young lad with a concave chest, which they were going to take his ribs out and reverse them; a procedure they had never done at the hospital before and there was another chap who was quite an early age to be having bypasses.

The first three days after bypass surgery were difficult but then he began to feel the benefits.

The first three days after bypass surgery were difficult but then he began to feel the benefits.

View topic summary
SHOW TEXT VERSION
PRINT TRANSCRIPT
In the hospital, as I said earlier, I saw it as three days trauma, for instance, making sure, the physiotherapist coming round, making sure your chest is clear. That's hard work getting the phlegm up from your chest at times. If you are able, within twelve hours you were sitting on the bedside.

The second day you may be, may be walking. The third day you are certainly walking. The surgery itself on the chest wasn't so much a problem as actually the legs, where they take the vein out of that, in a lot of people, including myself, gave more problem than the chest.

The chest was a shade wobbly at first because you realise they put it back together again, they pin it together. So until those pins become firmly implanted you've got a weeny, weeny bit of movement. Sometimes you don't notice it but it's there and that's where you need to be careful about it.

You don't overdo things too much in that area to possibly knock things out of alignment or loosen a bit of wire, I don't really know but that was the thing that gave me concern and the leg. My right leg where they took the first vein out of for the first lot of bypasses, that's fine. My left leg, I still have to wear a stocking. Without the stocking, without the support on the leg, I've got problems there; I need that support.

But gradually after the operation, once those first three days are over, it's magic. You really feel the benefits then after the third day. You're really feeling a lot better, well worth three days of a little trauma.

Combining exercise with relaxation is important.

Combining exercise with relaxation is important.

View topic summary
SHOW TEXT VERSION
PRINT TRANSCRIPT
The art of relaxation is probably underplayed by a lot of people but they don't really realise the importance of learning to relax properly. That is emphasised during this rehabilitation course.

Is that something that you had experienced before your heart attack?

Not really, it's only in the last five years that I began to realise what relaxation was about and the importance of it and how it does help, particularly on top of doing a bit of exercise; the marriage of the two's important.

What do you do to relax?

You've got an option; whilst you're in the hospital doing it, you have sheets to lie on and a headrest and music is played, words are spoken which you need to take in initially but initially. But after you've learnt to do this, you can relax anywhere you want, sitting or lying down in your own house and just relax from the head down to the toes.

There's an art in it. It's not all that easy but it comes natural after a while. It's like anything, if you want to do it, you'll do it and you'll do it well. It will come natural.

Try not to be frightened of having heart surgery.

Try not to be frightened of having heart surgery.

View topic summary
SHOW TEXT VERSION
PRINT TRANSCRIPT
Fear of the unknown is terrible and I think everyone has to appreciate that and we all suffer. We have different ways of showing it, some of us don't show it, I do show it. Nothing to be ashamed of.

Anyone who's going to have heart surgery, you've got to be optimistic. The advancements made since even when I had my first surgery are tremendous; the number of surgeons and the procedures have improved dramatically.

Try to get the fear out of your mind, I know it's impossible, but you've still got to try. Fear is the main thing that keeps a lot of people away from hospitals.

I know there's a fair waiting list nowadays. There's two ways at looking at it; if you're low down on the waiting list, you're not all that serious. If you're high on the waiting list then you will be pushed through and attended to quite early. That system is quite good. I think that's about it.