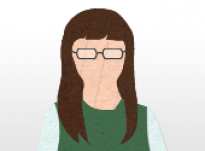 Age at interview: 17
Brief Outline: Sky, 17, keeps a close eye on her weight and feels she isn't as fit as she used to be since she started college and has less time for exercise. Her mum has recently lost a lot of weight. In year 10, Sky's friend developed anorexia. Ethnic background: White British.
Background: See 'brief outline'.

Sky, 17, is a full-time student. Although she has never really had any particular problems with her own weight, she says she does like to keep a check on it and weighs herself every few weeks. Sky has noticed that since she started college, she has had less time to exercise than she would like and although she does try to keep fit, she’s not as fit as she used to be.
Sky describes her mum as large and cuddly and says that she has tried lots of different diets and has recently lost lots of weight. Sky says she is aware of what she should and shouldn’t eat because of her mum’s diets, although she doesn’t actually join in on the diet with her mum. Sky does have some concerns about gaining weight, because some people have told her that, because of her mum’s size, obesity might be in her genes. She says she wouldn’t want to get too big, because it makes it difficult to do things without getting out of breath and because overweight kids are bullied. However, she also says she wouldn’t want to be really skinny because she thinks it looks unattractive and unhealthy. Sky says the media talks about the health risks associated with being overweight, and she doesn’t want to die earlier that she should.
Sky says she was one of the first girls in her class to start developing, and that made her quite aware of her body shape, and found it difficult getting changed in front of the other girls because she felt embarrassed about her curves.
One of Sky’s friends developed anorexia when they were in Year 10. Sky and her friends began to notice that she wasn’t eating very much and that (J) she had lost a lot of weight. Sky says this put a strain on their friendship, because they couldn’t agree what to do – whether to confront their friend or not – because they were worried she would try to hide it. When the girls told their mums and their teacher, they said they didn’t want to mention it to the girl’s mum, and advised them to just to keep their eye on her. This made Sky feel quite useless and powerless. Eventually, her friend got some help and recovered, but Sky felt like she couldn’t mention anything about it to her, because she didn’t want to make things harder for her. Sky has noticed that whilst under-eating is sometimes described as a mental health problem, obesity isn’t viewed in the same way, but she thinks it should be.

View topic summary
SHOW TEXT VERSION
PRINT TRANSCRIPT
Eating healthily what does that mean? What kind of things do you have? What do you consider to be healthy food?
On a typical day I’d have porridge at breakfast, for breakfast, my dad makes that. And then at break time I’d have an apple. At lunch I’d have a cheese and tomato ketchup sandwich. And my dad makes like a little salad for me and my mum and my dad. And then a chocolate bar, like a little BreakAway or whatever. When I get home I’ll have a cup of tea and then we’d have an evening meal. It might be spaghetti bolognese or stuff like vegetables and noodles, something like that. I might have a pudding afterwards if I’m feeling particularly adventurous. I might not it all depends on what mood I’m in. But that’s about a typical day for me.

There should be as much awareness about under-eating as there is about over-eating.

There should be as much awareness about under-eating as there is about over-eating.

View topic summary
SHOW TEXT VERSION
PRINT TRANSCRIPT
I think there needs to be more awareness about like anorexia and bulimia and stuff because there’s loads of stuff about obesity and getting overweight and stuff but I don’t think enough emphasis is put on under-eating at the moment. I think it’s all on over-eating. Because I know over-eating and obesity in kids in Britain at the moment is a big issue but also under-eating is a big issue as well and I don’t think that’s, enough emphasis is put on that.
Previous Page
Next Page